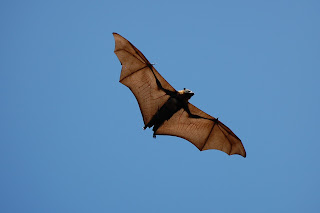 It was just as hot the next day, so an hour-long lunch break at Singleton was very much appreciated by all.  Even better, there was a resident flying fox colony in the park to provide considerable entertainment. 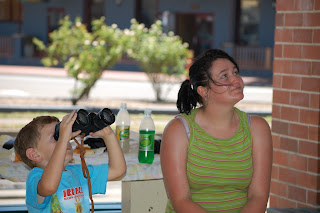 Posted by Happy Hamby Campers at 23:50 No comments:


It was very hot the day we were driving home (close to 40 degrees) and our tolerance for old-fashioned traveling had expired by the time we reached Tamworth (aka "cowboy town").  The first caravan park we tried was not Keegan-friendly but happily Austin Tourist Park was happy to have him (and us) in an overnight cabin.  http://www.austintouristpark.com.au/

Erin, Nick and I all enjoyed a shower - while Vaughan had a soak in the mini-bath shower recess.  Erin asked him afterward if he was squeaky clean - he rubbed his singlet and jamies before responding that he didn't squeak! 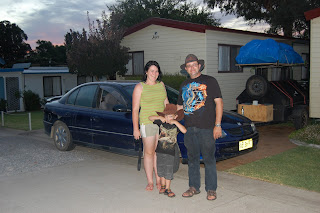 Posted by Happy Hamby Campers at 23:45 No comments:

Posted by Happy Hamby Campers at 23:40 No comments:

When asked for opinions on a destination for our January camping, both girls had been adamant that showers were a priority!  By way of explanation, there are no showers in the forest and our longest stint was 4 nights away from home - so running water was truly appreciated when we returned!  Fellow forest campers had rocked up one time with a solar shower and pop-up ensuite tent, which seemed a fairly nifty concept.  The solar shower was cheap enough but we weren't convinced the ensuite tent was a bargain. so it was left in the shop - and Nick rigged this tarp enclosure instead.  (For the uninitiated, solar shower is a fancy name for a black plastic bag with a hose)!

http://www.bcf.com.au/online-store/products/Oztrail-Solar-Shower-20-Litre.aspx?pid=317011
My Kwiambal open-air(ish) shower was wonderful! I did keep an eye on the wandering goanna though, just in case he/she was our soap-swiping culprit!

Posted by Happy Hamby Campers at 23:35 No comments:

We drove back out to Ashford a few times during our stay.  On our first day we called into town hoping someone might be able to fix our damaged tyre.  The locals were chatting on the verandah of the Rural Transaction Centre, admiring a new puppy.  None of them were very optimistic of the town's tyre repair resources but said they would ring the mechanic.

Scotty the "would-be mechanic" rocked up as we were siting outside the bakery, sampling their pies/sausage rolls and milkshakes.  He apologised firstly for not being able to fix our tyre and recommended we drive further to Inverell (another 56kms) for assistance.  Seemingly he had sold off much of his equipment - and many of the town's businesses had also closed in the past two years. In fact, the only signs of life in Ashford were the pub, bakery, Rural Transaction Centre and agricultural supplies store.

Posted by Happy Hamby Campers at 23:30 No comments: 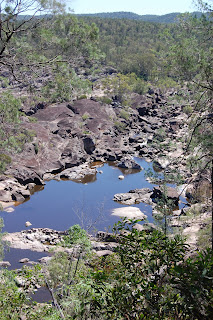 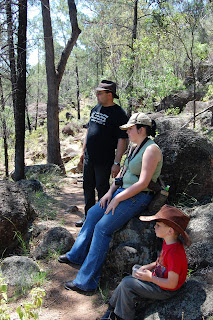 You would think a Dungeon would be down-low - yes?!  I guess this one was but you had to climb high (and walk far) to view it.  We set off reasonably early one morning on an extended bushwalk.  It was very scenic walking through the boulder country along the river, though very hot and we rested often along the way.  The pics above are from one of our stops, making best use of the little shade available.  Vaughan was whingey at various points but overall managed the 1.7km walk with his boots on the wrong feet!

After we reached the main lookout and admired the view, it was another 2km walk back to our car.  We walked along a road for the return trip, easier in some ways (for all but Nick, who carried Vaughan at points) though there was far less shade.


There was a very bushy stretch of main road from the Kwiambal turn-off back to Ashford where all the properties had funky letterboxes - in most cases the houses were well out of sight, so the driveways and letterboxes were the only clue that someone lived close. 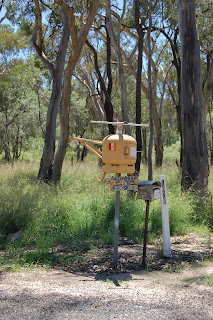 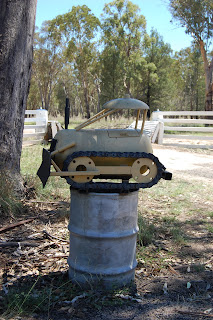 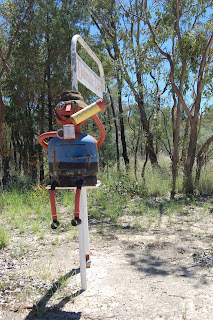 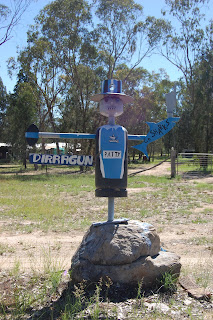 Posted by Happy Hamby Campers at 23:28 No comments:


We went to Texas - and Keegan came too!  We caused a bit of a stir in the main street.  A man came out to investigate our scurrying about in front of his shop.  He was distinctly unimpressed that a gecko had caused such excitement!  It was too hot to leave Keegan in the car, so Erin carried him along with her - and various people came up to admire him and tell bird stories.

Nick had consulted the map the previous night and was hopeful of obtaining Pepsi Max (aka "black death") at Wallangra.  I had my doubts but it was a bit of a giggle to witness his expression as we passed through the small township of six houses!  (I have checked just now and it seems the recorded population is 228, so I am wondering where all the people were hiding)!

Fortunately Texas offered a choice of two shops (and a butcher), so we took the opportunity to stock up on a few items including ice and "black death".   I visited the butcher too, who was a bit surprised to be featuring in Nick's holiday DVD but coped reasonably well with his few minutes of fame! 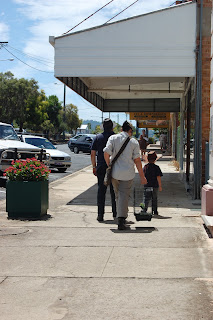 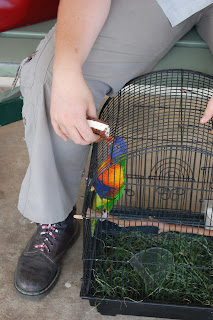 Posted by Happy Hamby Campers at 23:27 No comments: 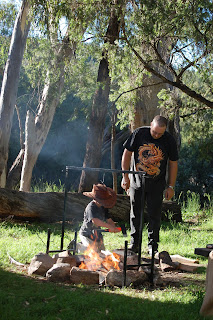 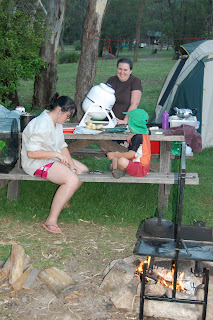 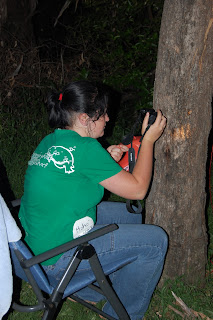 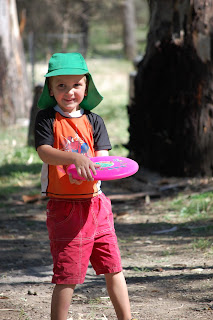 Posted by Happy Hamby Campers at 23:26 No comments: 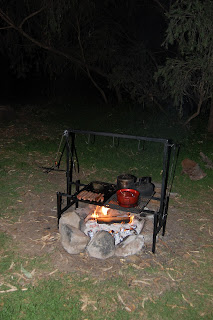 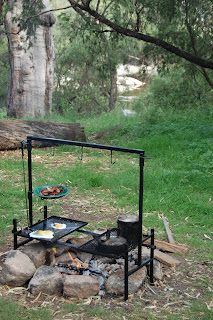 The Maxi BBQ definitely made camp cooking so much easier and more enjoyable!  How civilised is this?!
Posted by Happy Hamby Campers at 23:25 No comments: 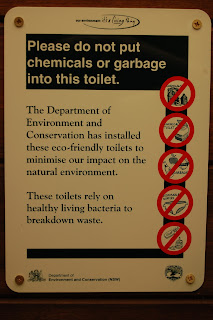 Aside from the scenery and wildlife, one of the best things about Kwiambal was it's toilets.  Seriously.  Pit loos can be - a challenge.  Kwiambal had the cleanest non-flush loos I have ever encountered.  How do they manage it?  Don't ask.  Don't even think about it.  Definitely don't listen when Nick starts to elaborate.  Just - don't!

It is far better not to know.  I'm not kidding.  Ignorance is bliss!  (I wish I was still ignorant)! 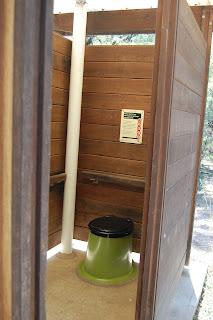 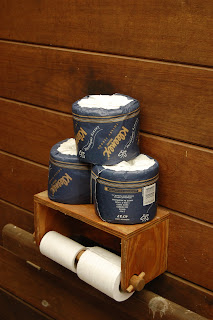 Posted by Happy Hamby Campers at 23:20 No comments:

There were a number of deserted buildings along the road into Kwiambal.

We investigated most of them - speculating about what the structures were, who had lived or worked there, what their life had been like, when and why they had left etc.  We startled a few roos as we poked about!
Posted by Happy Hamby Campers at 23:15 No comments:

To the bat cave! 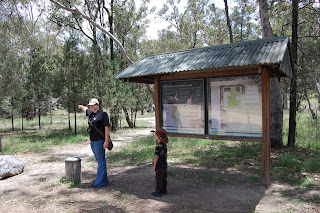 "The vulnerable and rare Large Bent-wing Bat (minio-terus schreibersii) depends on the caves as a nursery and roosting site. The Eastern Horse-shoe Bat is also recorded in these caves. These bats are protected species, and as such the caves will be closed during their breeding season."

Erin is a big bat fan (and she likes small bats too!), so visiting the Limestone Caves was a compulsory outing, which we all appreciated.  As much as we enjoyed exploring, seeing the bats and fairy martens (small birds), it was at least 10 degrees cooler within the caves so a very pleasant contrast to the outside.

There is some information regarding the history of Kwiambal National park generally (and the Limestone Caves specifically) at the link below:- 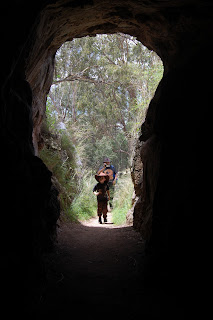 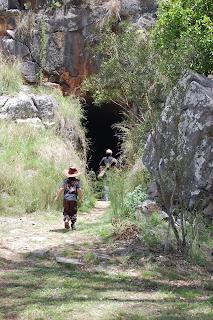 Posted by Happy Hamby Campers at 23:10 No comments:

"The many delightful frogs of this park are more often heard than seen."

So says the official blurb for the Park but they obviously hadn't counted on Vaughan's eagle eyes.  He spotted several while swimming.  They were so small I found them difficult to see even after they were captured!

Erin spied a frog near our gazebo soon after arrival.  We discovered another slightly larger (fortunately un-squashed) one under the foam matting when we were packing!

Posted by Happy Hamby Campers at 23:05 No comments:

Nipping in for a dip

We swam in the late afternoon as though it was very hot during the day, the sun had a lot of "bite" and we were determined to avoid sunburn.  It seemed the water had "bite" also - and it took us a while to realise there were small yabbies hiding in the sandy gravel!  They nipped at our legs and it became an afternoon sport to catch them while lolling about in the water.  The river was so tannin-stained, it was like swimming in tea - which was to the yabbies' distinct advantage in anything but the shallowest water!

Posted by Happy Hamby Campers at 23:00 No comments: