"... you are still lapping everybody on the couch."

I'm sure we "lapped" many couch potatoes during our 8 kilometre walk through Brisbane Water National Park but we were amazed and inspired by those people that lapped us!  We met quite a few bods running in the early part of the track.  One commented that they were at the tail end of 30 kilometres (from Somersby)!   I have since googled and it seems the people we saw are part of a walking/running club, the Terrigal Trotters.

We were very impressed, as some were older than us - and then we saw where they had come from and our admiration grew, particularly as we struggled to scramble over some very steep bits.  You can see where they went, here.  (We only got three quarters of the way along the trail from Woy Woy Road to where their route veered upward toward point 15).

﻿ I was booked for a photography workshop at Terrigal that afternoon, so we turned about and only just made it back to the car in time to dash for the course.

We all enjoyed the adventure though and there are plans to return and walk all the way down to Wondabyne Station.  (There is no road access to the station, which is barely the length of one carriage)!  By all accounts we signal to the train that we wish to board, in much the same way as we would flag down a bus - now that promises to be an even bigger adventure!

Update:  we made a return trip to Brisbane Water National Park and wandered all the way down to Wondabyne Station.  You can read of our exploits here (and a few post after that point).
Posted by Happy Hamby Campers at 22:30 No comments: 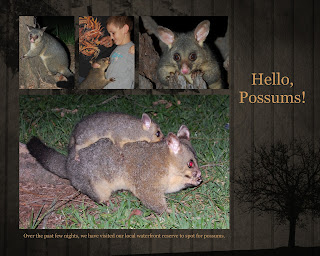 Since commencing insulin injections last year, Nick has been very conscious of walking 10,000 steps a day.  This generally takes him about an hour and a half - so he fits the exercise in where he can, around his shift-work.

Lately, Nick has been walking of a night.  He encountered a Common Brushtail Possum at the waterfront reserve near our home several times.  As it seemed the possum was a regular at the park (and quite friendly), we have all visited several nights this week. On most occasions we have seen a few possums, including a mother piggy-backing her baby.

They were out much earlier last night and we spotted at least five different individuals.  The mother and baby came down to share apple with us and it was lovely to see them so close.
Posted by Happy Hamby Campers at 16:24 No comments:

Email ThisBlogThis!Share to TwitterShare to FacebookShare to Pinterest
Labels: possums 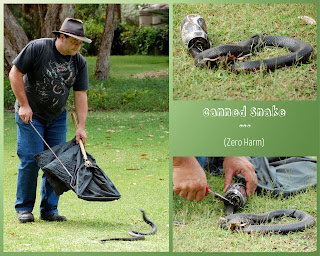 Nick completed his WIRES snake handling course in November 2010 and has been called out for quite a few rescues since then.

He has definitely gained a lot of knowledge and experience since his first novice relocation in March 2009!


Without doubt, this most recent rescue was the most interesting.  The Red-bellied Black Snake had dropped into a mechanics' pit and managed to get it's head stuck in a coke can.  Nick brought the snake home as it was and then worked on the reserve at the back of our house to free it from the can.

Vaughan and I played photographers from a distance, making good use of my zoom lens!

At one stage we thought the snake was dead, it was laying so still but seemingly it was tricking because it was quite lively/cranky when out of the can! Nick checked it thoroughly before later releasing it back to its home territory (about 50 minutes drive down the Coast from us).
Posted by Happy Hamby Campers at 21:00 No comments:

Email ThisBlogThis!Share to TwitterShare to FacebookShare to Pinterest
Labels: snakes 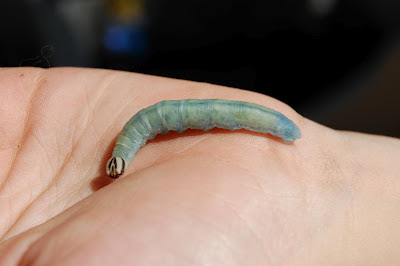 We are used to encountering lots of interesting wildlife when out and about, so tend to consider what is in our own backyard as more commonplace.

However, Vaughan found a very nifty blue caterpillar resting on one of our fence panels - and we certainly hadn't seen one before!

It took quite a while to identify because if one googles "blue caterpillar" the majority of hits are for Absalom the "who are you?" caterpillar from Alice in Wonderland!  Bet you didn't know that?!

I happened to have a copy of The Butterflies of Australia on loan from our local library and was able to cross-reference that against various internet photos and information.  I am fairly confident that our Absalom will transform into this, which was a bit surprising as I was expecting at least some blue on the adult!
Posted by Happy Hamby Campers at 13:22 No comments: