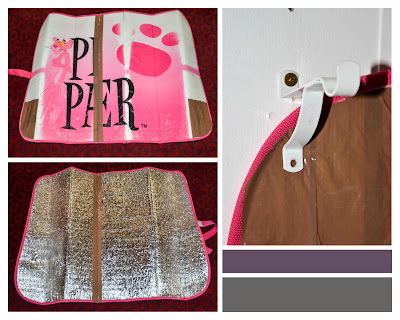 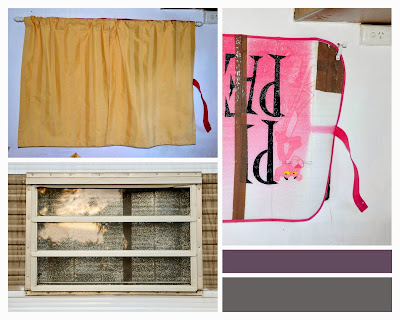 When making curtains for the rear of the caravan, I included insulated lining on the set for the long window. I didn't think to do the same for either of the side windows.

Given the cold nights experienced during our most recent camping weekend - and the fact that one window is above my pillow - I brought a set of curtains inside this afternoon, thinking I would line them.

I was still pondering what fabric to use when I spotted this Pink Panther sun-shade.  It had been intended for another project - but that one didn't go ahead.

It seemed easier to cover the window (than line the curtains), so I cut away a shaped section of the sunshade and stuck the two wider ends together.  The curtain rod brackets are only fixed using the top holes.  As the bottom holes are free, it was possible to slip the sunshade between the bracket and the wall.  It may be that the pressure of the bracket is enough to hold the sunshade in position against the window.  If not, I'll add elastic loops for extra security (unless I have a better idea)!

The curtains cover most of the sunshade and I'll probably remove the pink strap you can see in the photo.  Only the silver side of the sunshade is visible from outside the van, though we aren't overly concerned about impressing anyone walking past!
Posted by Happy Hamby Campers at 20:42 2 comments: 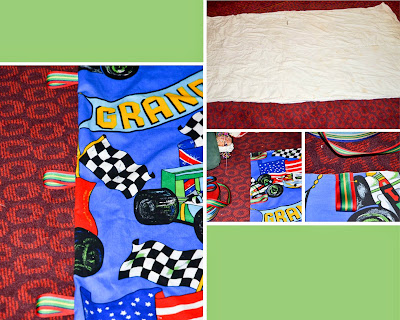 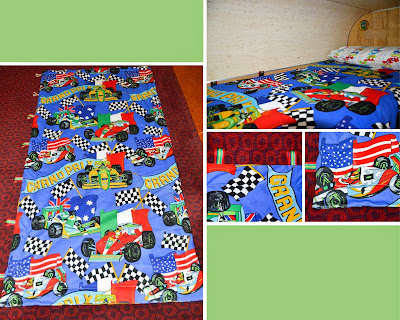 When Vaughan graduated from his cot (many years ago), he moved into a car bed. I think this racing car fabric was bought around that time - with thoughts of making a doona cover.

I listed the material on eBay but decided I may as well use it (rather than receive less than $1.00 for my efforts), so ended the auction.

I've been busy the past couple of days, revamping an old quilt for Vaughan to use in the caravan.

The quilt was cut down to about 94cm wide.  I shortened it a little, too.

The new cover has a series of loops along the wall side.  It may be that we'll use them with the weight bar (if the blankets are not needed) or improvise some other fastening system, when necessary.  It doesn't matter if the loops aren't used, they tone in with the fabric and are not highly visible when viewing the bunk from a normal standing position.

Vaughan likes to read in bed and I'm thinking of using some of the leftover quilt fabric to create a bedside pocket similar to the one I made for myself.
Posted by Happy Hamby Campers at 17:18 No comments:

Bedding down (or up)! 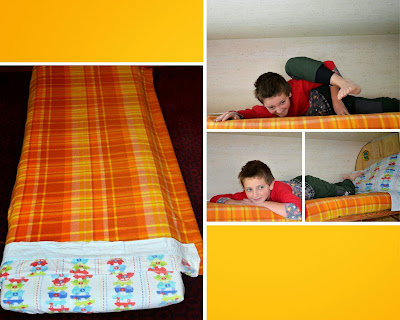 I returned the 4WD mat to Vaughan's top bunk yesterday, then made the bed using my newly-created inseparable sheets. Wow!

I still had to stand on a milk crate but the job was so much quicker and easier - no contortionist antics for me!  I was very impressed with my excellent work!

Installing the blanket and weight-lifter rod was a bit trickier, so I called on Nick for assistance.  The sticking point was that I wanted the blanket edges to hang evenly on the non-wall side - you know, within a few millimetres of each other!  When it became (more) obvious that wasn't a realistic expectation, I compromised so the top edge overhangs the other by a small margin.  The blankets still look neat when the edges are not tucked under the mat and I'm quite happy with the end result.
Posted by Happy Hamby Campers at 10:46 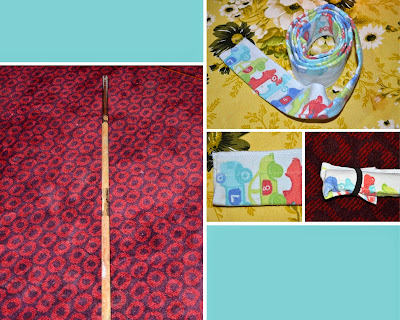 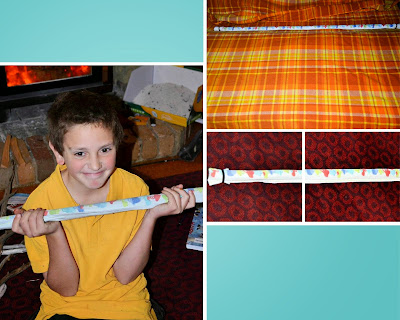 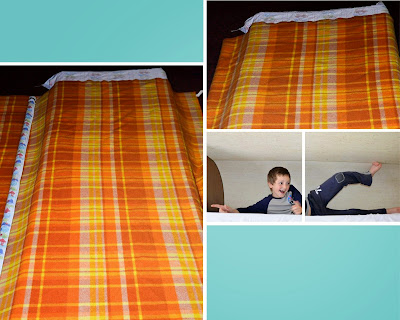 Keeping Vaughan's top bunk bedding in place is a two-part mission. Now that I've made my first pair of inseparable sheets, it was time to ensure the blankets would also stay put.

Nick and I discussed several options.  We both had a similar idea of using a heavy rod to weight the blankets along the wall side of the bed.

There is a shallow channel, where the bunk platform hinges to the wall.  The rod should sit nicely in that space, holding the blankets on top of Vaughan.

I have a number of woollen blankets, bought at bargain prices from various op-shops.  Although I'd been using this one on our caravan bed, it makes better sense for Vaughan to use it, doubled over, on his bunk.

Nick and I visited our favourite tip shop today.  We were particularly looking for a rod, used for holding weights.  We found one even better than we'd hoped to get.


In fact, we came away with a swag of stuff, all for $15.00! The rod represents less than $5.00 of that total price.  It weighs around 7kg and should work well for our purpose.  When we found it, there were some clamps bolted to the rod ends (to hold the weights).  Nick had expected a different configuration, which would have required him to use the metal grinder.  He was very happy to un-bolt the clamps - and took them off before I could take photos!

I made a simple cover for the rod, using some off-cuts from the inseparable sheet project.  The ends are turned over and held firm by some scraps of elastic.

It's cold outside - and raining - so at this stage the 4WD mat is on the lounge room floor with the rod in place.  All looks good and fingers crossed will work well once properly fitted to Vaughan's top bunk!
Posted by Happy Hamby Campers at 21:42 No comments: 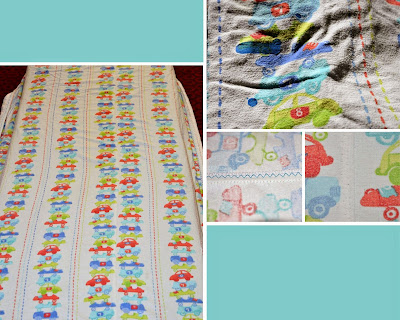 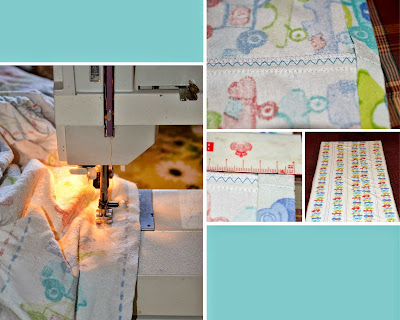 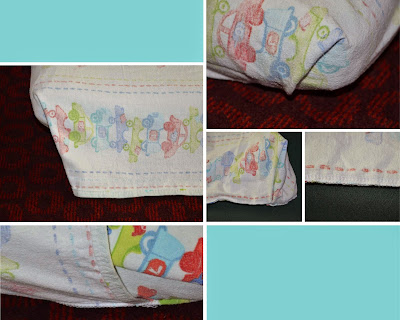 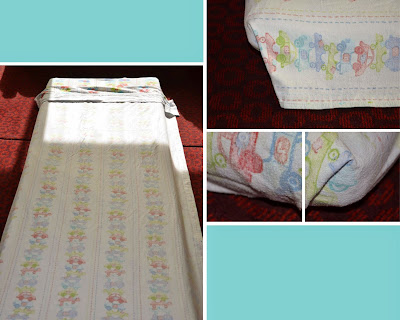 Our last camping trip highlighted some bedding issues, particularly for Vaughan's top bunk. He lost all his blankets during the night and was very cold when he woke and migrated into our bed, some time in the early hours of Saturday morning.

I've been looking at caravan bedding options.  I thought trucker sheets were a neat idea - but I was looking for a lower-cost solution.

As I view the link now it occurs to me that even if funds were available, the single bed size would swamp the 4WD mat that Vaughan prefers to use on his top bunk.

I started googling and learned the term inseparable sheets - hah!  That's what I needed to make!

The linked tutorial gave instructions for joining the top sheet and fitted bottom sheet along the bottom edge.  I wanted to join my sheets along the long (wall) side edge as well as the bottom, so needed to adapt the method.

Posted by Happy Hamby Campers at 13:35 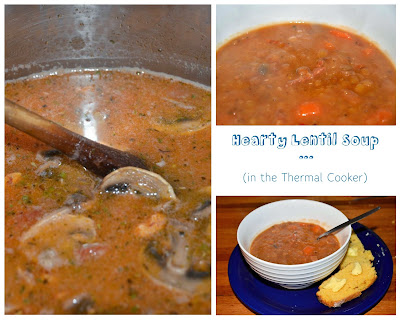 I've used this recipe previously as the basis for the chunky chorizo soup we took with us for Nick's birthday trip to the snow last year.  I used the same recipe as a guide again today, making a double quantity.

There was a fair bit of substitution!

I used the large inner pot of the thermal cooker.  I fried the onion, garlic, bacon and salami in a little olive oil.  I then added the fresh carrot slices and let them cook for a few minutes before tipping in the tinned tomatoes.   (I used the tomato tin to measure five tins of water into the pot).

Salt and pepper were added to taste, then mixed herbs and/or fresh rosemary, as well as stock powder.  I used the last of the tin, which was a little less stock powder than ideal.  I didn't have any tomato paste so used some home-made relish instead.

I've been playing with my dehydrator so also added some dried mushroom and carrot slices.  Given there is no liquid lost in thermal cooking, the dried vegetables will help to thicken the soup - as will the cup of red lentils (extra to the original recipe).

The soup was brought to the boil and simmered for about 15-20 minutes before putting into the insulated outer pot.  We ate it for dinner this evening, served with slices of cornbread.  (I made the cornbread in the oven but it could have been done in a camp oven).   The verdict - an empty pot!
Posted by Happy Hamby Campers at 21:45 2 comments: 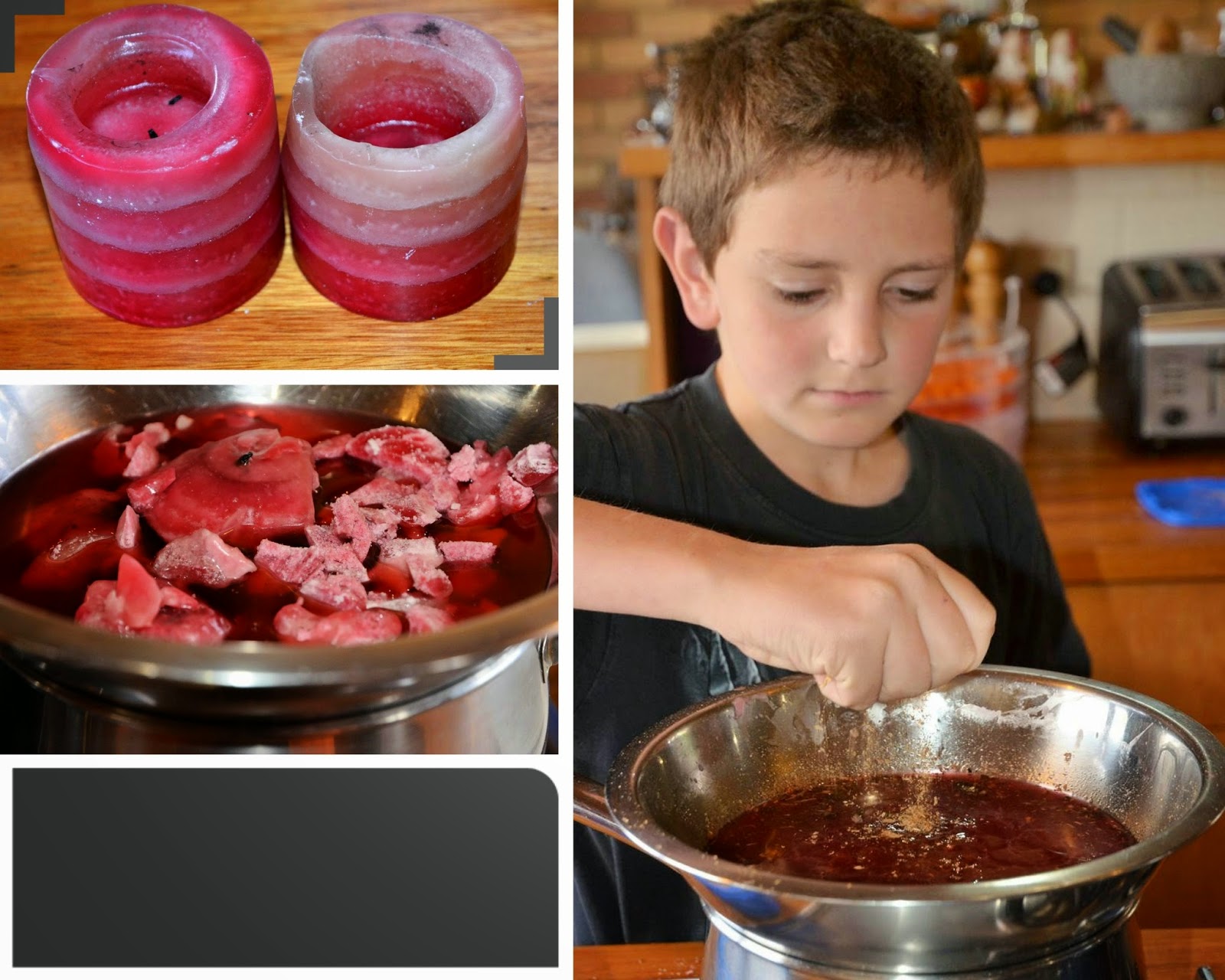 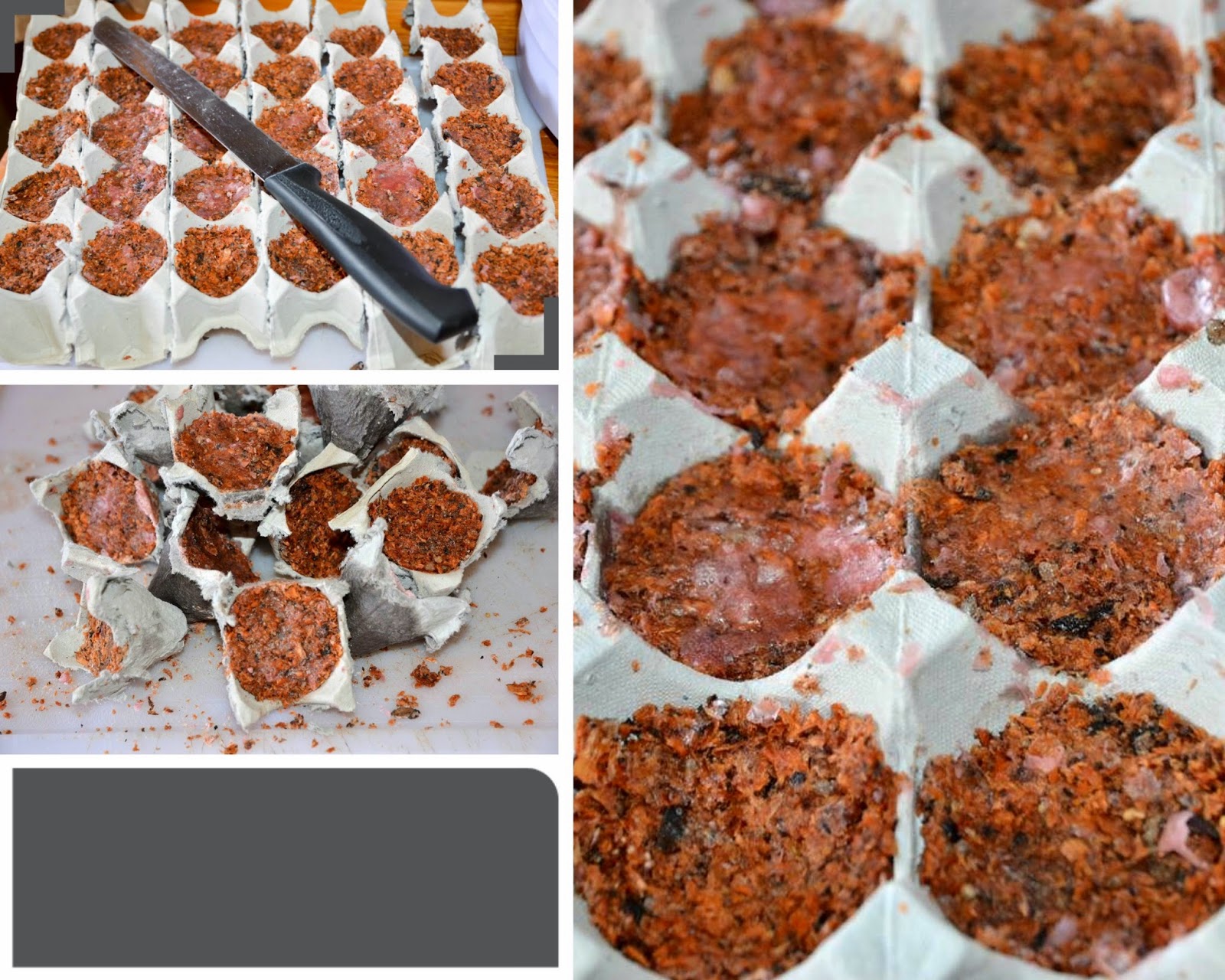 It was a day for experimentation.  I'd read about making fire lighters from wax, dryer lint and egg cartons. We no longer use a dryer though, so further reading confirmed the same method could be used with sawdust - which we have plenty of!

I had old candles in the cupboard, so choose two and melted them as per these instructions.  Vaughan helped to mix the sawdust into the wax.

I'd seen other methods that involved tipping the melted wax over the egg cartons but this approach seemed easier/safer.

Our mix yielded 35 egg carton fire lighters.  Not bad for stuff that was all on hand.  No additional outlay required!  We don't get much junk mail, so have a limited supply of newspaper.  I tried wrapping a few of the single firelighters in A4 paper destined for the recycling bin.  It wasn't greatly successful but the firelighters themselves seem to work well - though are yet to be tested in the great outdoors!
Posted by Happy Hamby Campers at 19:06 1 comment:

Email ThisBlogThis!Share to TwitterShare to FacebookShare to Pinterest
Labels: firelighters 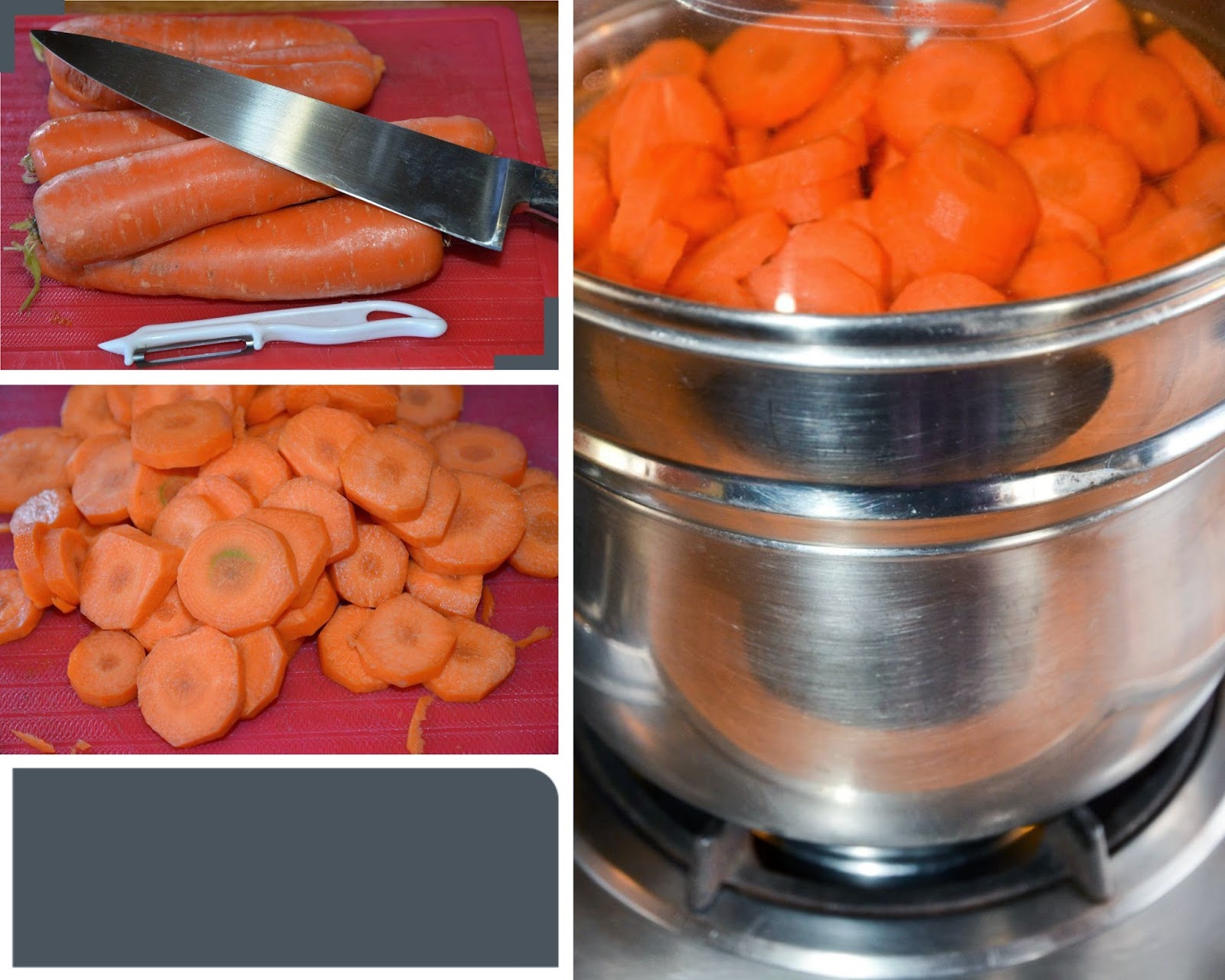 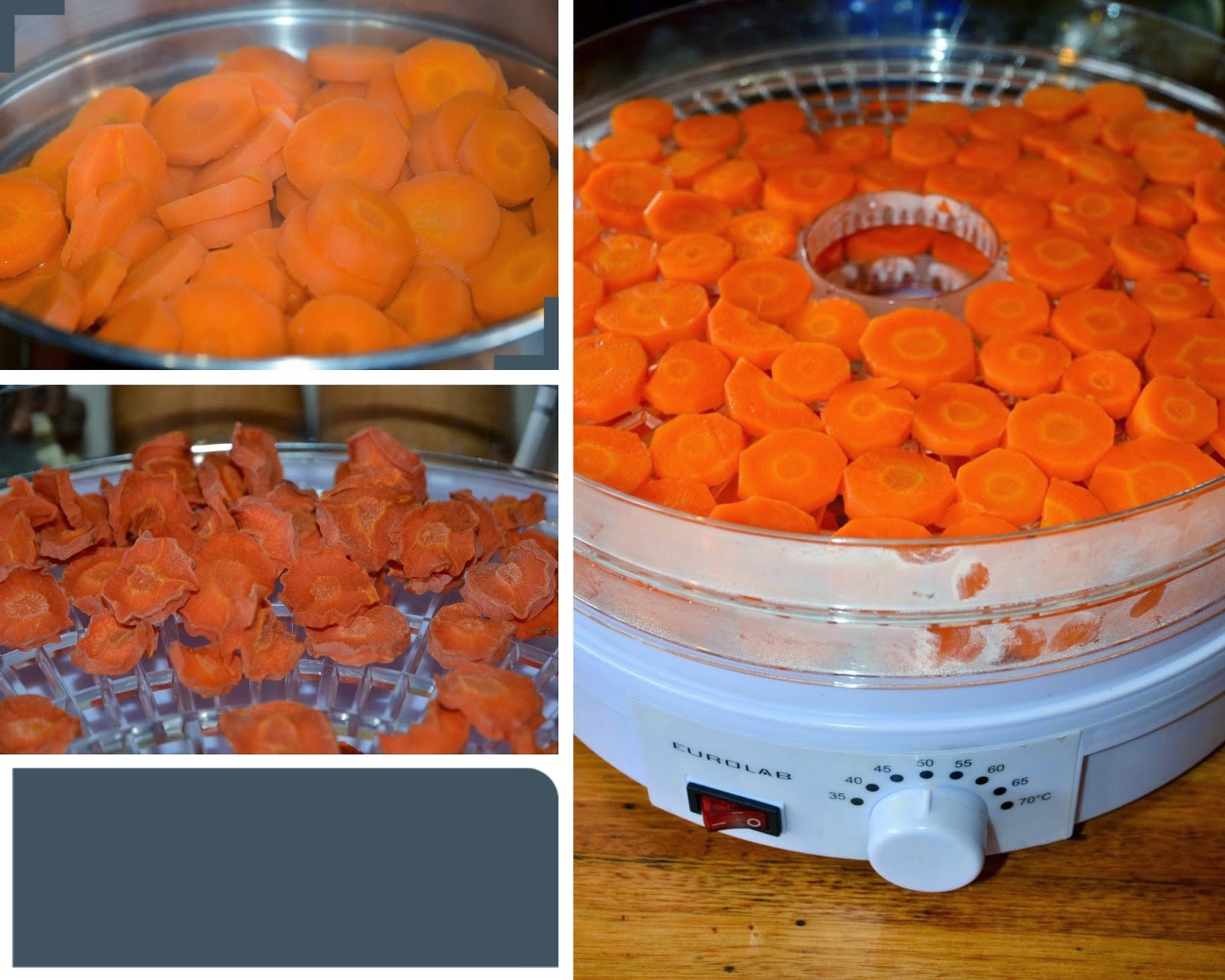 I conducted another dried vegetable experiment today. This time with carrots. I started with a kilo of larger carrots (as per the backpacking chef's advice), then steamed the slices for around eight minutes before arranging them in the dehydrator.

Unlike yesterday's mushrooms, I only needed two of the five available trays.

Drying time seems to be a variable concept. All up the carrot slices had around six hours.

It's quite interesting to see how much they reduce in size.

I started with eight large carrots, which was 1kg according to the packaging.  I didn't think to double-check the original weight.  Those same carrots (less skin and trimmings) now weigh just under 100 grams - and fit easily into a 470ml plastic container!  Pretty nifty, eh?!
Posted by Happy Hamby Campers at 18:46 2 comments: 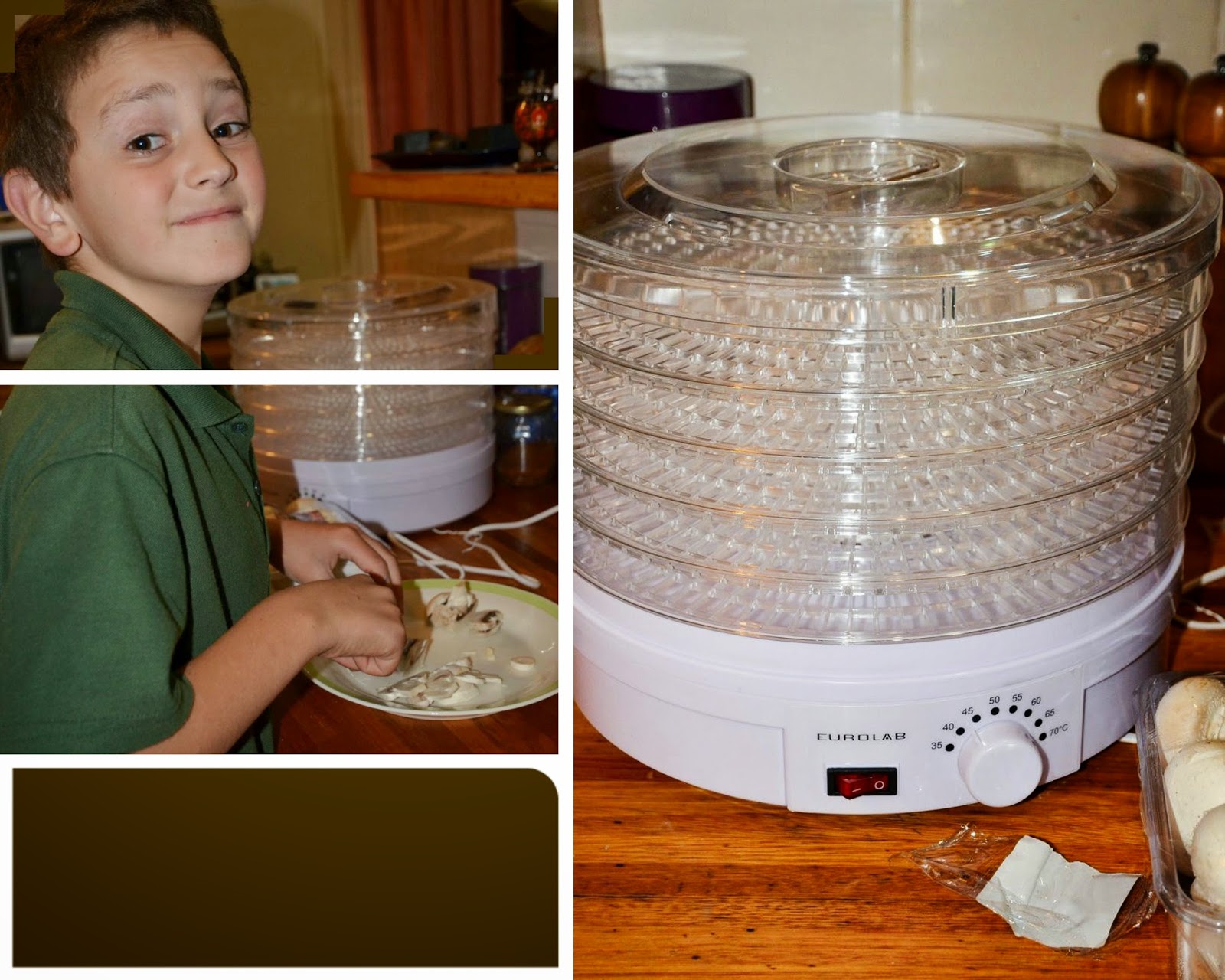 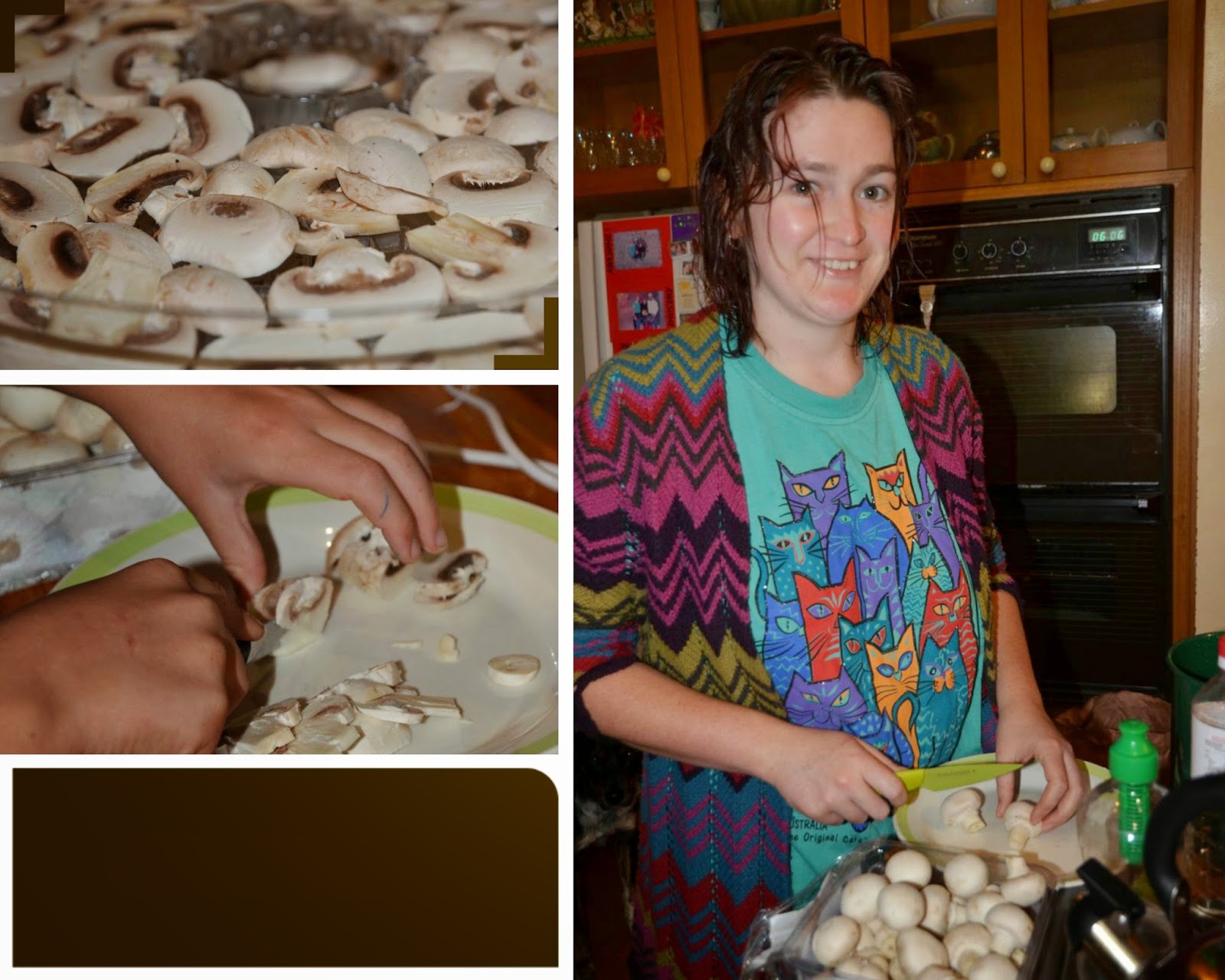 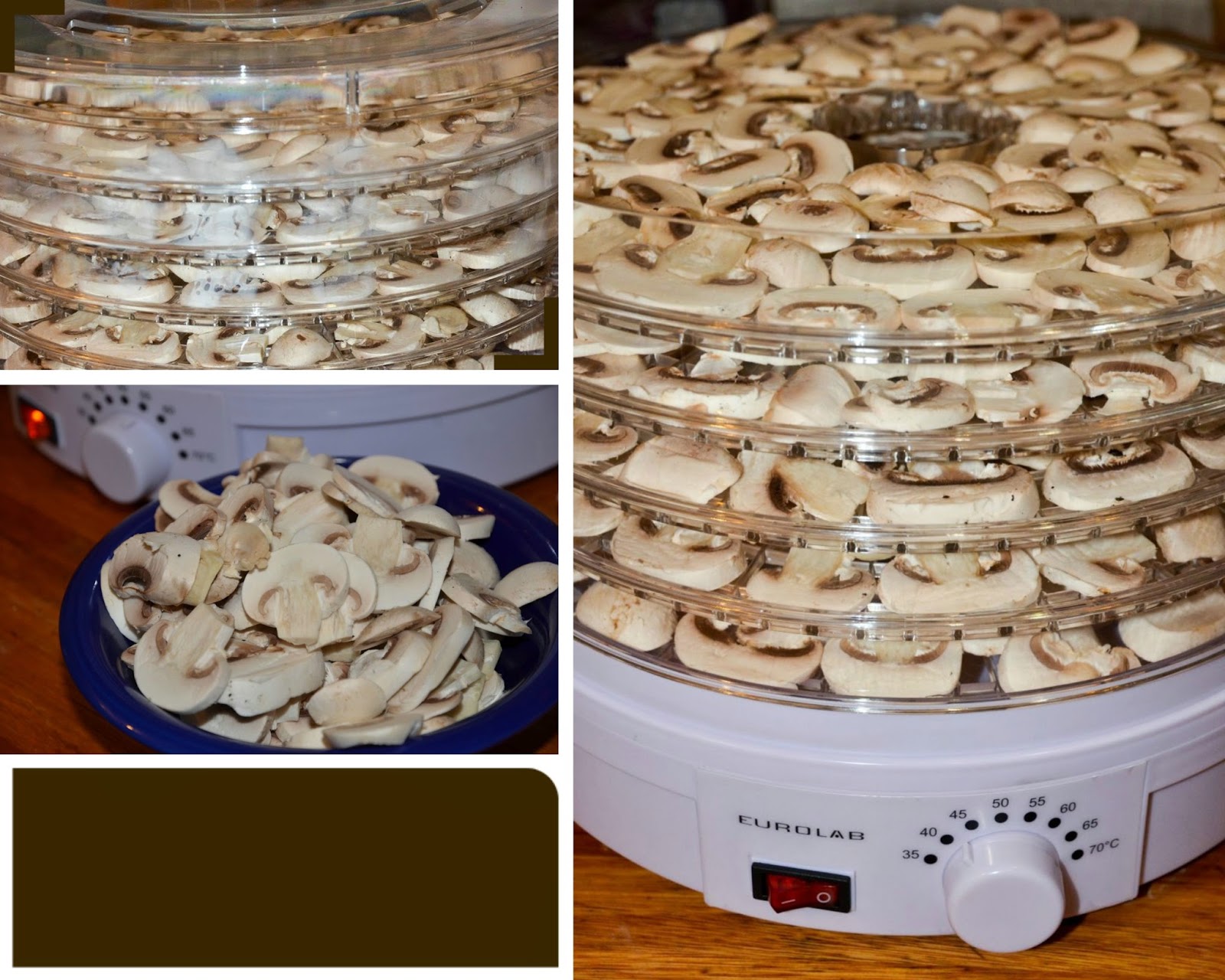 I mentioned my bargain dehydrator last night. I've since checked the records and it cost just $19.97 - brand new with free postage!

Of course, I hadn't set out to buy a dehydrator but I thought it might be handy.  I'm sure it will be - now that I've retrieved it from the top shelf of the pantry and actually plugged it in!

I re-discovered a great website yesterday.  Chef Glenn is a back-packer who shares lots of information about dehydrating various foods.  He has recipes and packing tips also.

When we still lived on the Central Coast of NSW we used to regularly shop at a wholesale food supply store.  At times I bought dried mushrooms.  They were great to take camping and I sometimes used them at home.

I was at Aldi today and they had 500g packs of button mushrooms for $0.99.  It was a sign, for sure!  I bought two packs and started my first drying experiment tonight.  Fortunately Erin and Vaughan were keen to slice mushrooms.  The two packs were processed and I filled all five trays of the dehydrator.  (There is a bowl of sliced mushrooms left over but I'll use them for tomorrow night's dinner).

Chef Glen suggests a drying time of 6-8 hours.  My dehydrator instruction book states 4-10 hours.  At this stage, our mushrooms been drying for two hours and those on the bottom trays really seem to be shrinking.  They are changes to the slices on the upper trays also, so praps four hours will be long enough - for some if not all. I'll make notes for future reference.

The experiment is proving quite entertaining.  We are all checking progress and I expect there might be a shrinking vegetable theme for the weekend! 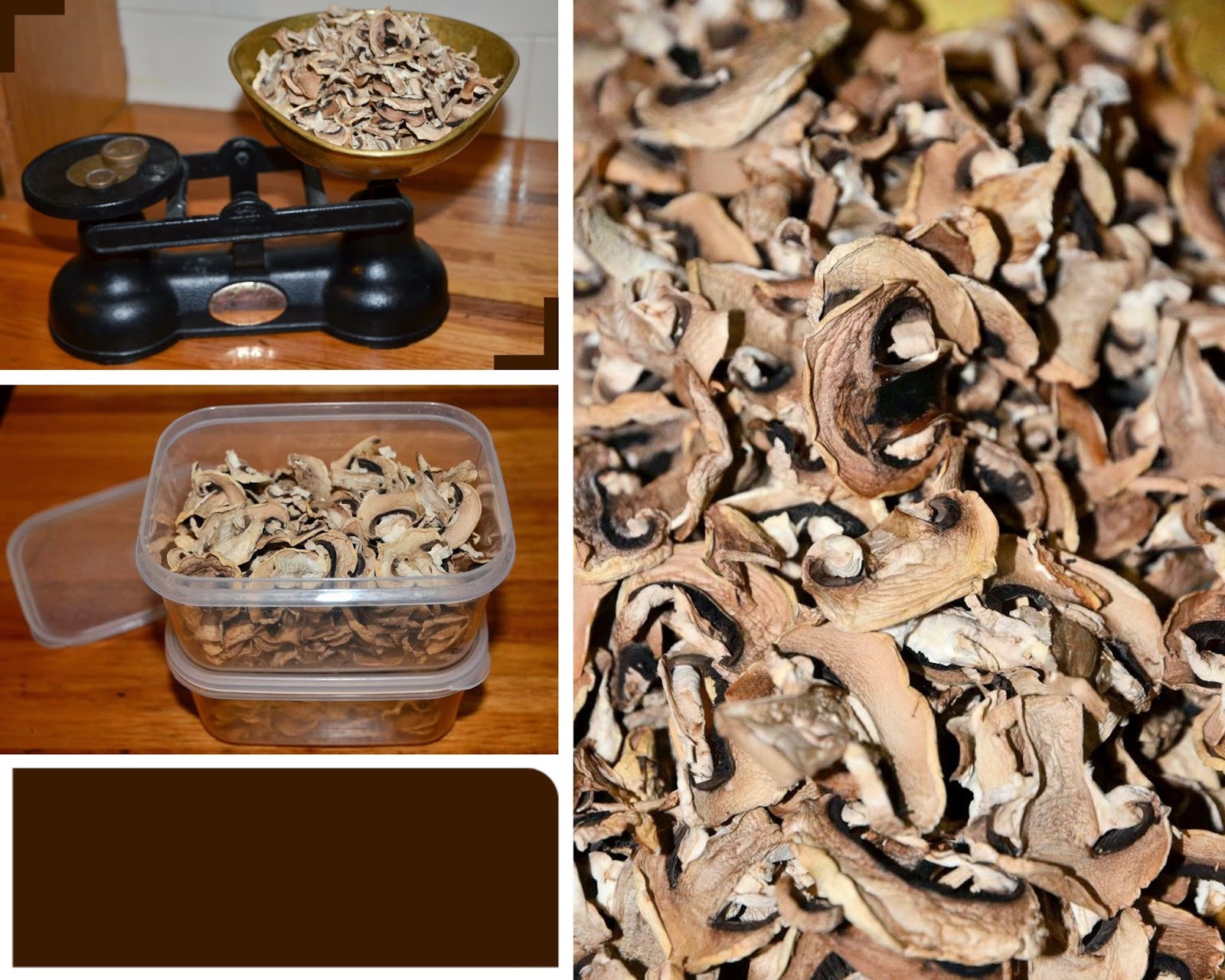 Edited to add:-
By the end of the drying time, I had around 60 grams of mushrooms.  They packed into two 500ml containers.

I'm not sure of starting weight.  I bought 1kg but used some in our beef stroganoff dinner - and forgot to weigh the remainder!
Posted by Happy Hamby Campers at 20:35 2 comments: