A box of trix! 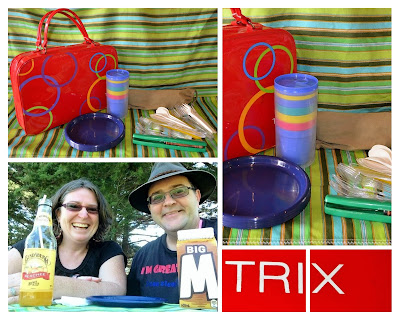 It's no secret that we like picnics. We have a healthy collection of picnic gear to cover most al fresco dining events.

Even so we are sometimes caught out - and pick up provisions for an impromptu picnic while on the road. Occasionally, we buy disposable items - which is a pain.

Quite a while back I started to keep a small selection of plastic cutlery, straws and cups in each glove-box.  (As an aside, prior to relocation someone stole one set of plastic cutlery from our unlocked car)!

I decided recently to include plates in addition to the cups and cutlery, so created an "emergency picnic kit" for each vehicle.  The red "Trix" case was bought from an op-shop for $3.00.  It just holds the items in the photo - four small plates, some plastic cups and an assortment of plastic cutlery.  There is also a sharp knife housed in a former toothbrush container.  Most importantly, there is a tablecloth.  As much as I like dining outdoors, I struggle with putting my picnic upon grubby, graffiti-ed tables.  A tablecloth fixes that!
Posted by Happy Hamby Campers at 15:35 1 comment: 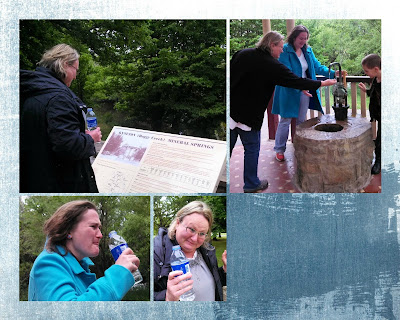 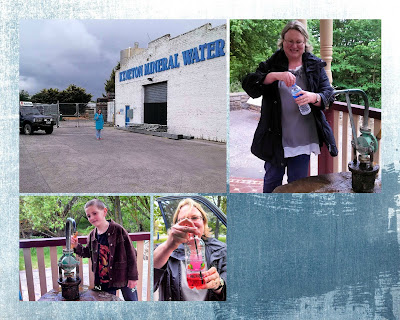 When Erin was in primary school, it was a special treat to order lunch from the canteen. Her drink of choice was an Apple & Raspberry Kyneton Springs Mineral Water.

Given that history, we called into the Kyneton Mineral Spring when out and about sight-seeing with Kerry.

Of course, we should have paid more attention to the bracketed Boggy Creek naming!

It's fair to say the water from the actual spring tastes absolutely nothing like the bottled variety - and we do wonder what magic processing occurs in the factory!
Posted by Happy Hamby Campers at 20:00 No comments: 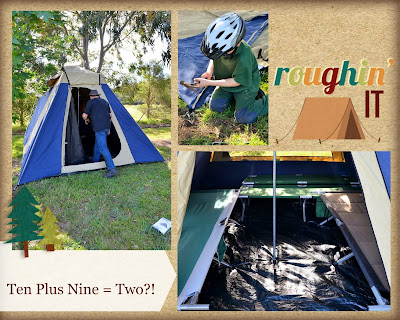 Yep, that's right - nothing wrong with our addition!

You might recall a few weeks ago we purchased an Oztrail Tourer 9?  It was an eBay find and we were very chuffed with our bargain-hunting.

Nick's been on the hunt since for an Oztrail Ten Plus - at the best possible price.  He spotted one last week (again on eBay) and we were the excited auction winners on Wednesday night.   Although the seller very kindly offered to meet us in Melbourne for the changeover, we were keen to explore a bit further from home so drove down to Gippsland today to finalise the sale.  It was a lovely day out, driving through some beautiful countryside - and chatting about camping/4WDing at the handover.

Once home again, Nick and Vaughan set up the brand new tent.  Lucky for us, it had never been taken out of its box because the seller preferred to sleep in his swag!  The roof frame was a bit of a fiddle but will remain in place as we have decided to use the square-fold method of storing the tent.

Erin has always slept on a stretcher but our tent upgrades have prompted us to rethink our sleeping arrangements also.  Nick and I bought a new/never-used stretcher for Vaughan a week or so ago.  It was a bargain $25 (whereas the retail price is closer to $80).  We've since tried out a double stretcher but decided two singles placed side by side would work just as well.  I was shopping at Aldi on Wednesday and they had some on sale for just under $40 each, so I brought two home.  Hopefully they prove just as reliable as our other Aldi purchases.

As you can see in the pic above, the four stretchers fit into the Ten Plus fairly easily - and there will be plenty of room for our gear on longer stays, when Erin sleeps in her smaller tent.  (One of our local camping shops currently has a sale on self-inflating camping mats, so we are planning to layby some before the promotion ends - to increase our sleeping comfort).

Today's tent was purchased for a bargain $356 (around $100 less than the best new price we could find online).  Effectively we purchased it and the Tourer 9 for less than the cost of buying the Ten Plus from a retail outlet.  We're very happy campers indeed!
Posted by Happy Hamby Campers at 21:49 No comments: