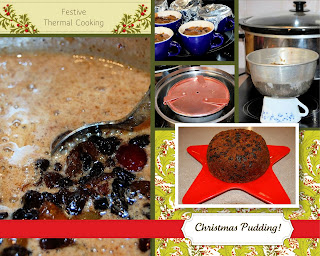 I have never made Christmas pudding but decided this was the year to try!

I used a recipe from Simple Savings intended for a slow cooker - and I did use the slow cooker for some of the mixture, to make six mini-teacup puddings.

The remainder of the mixture was used in a normal-sized pudding bowl cooked in the thermal cooker, following the method described here.  We went out looking at Christmas lights last night, so I checked on the pudding after we got home and had settled Vaughan with a story etc.

In all our pudding was in the thermal cooker for around 10 hours - and looked perfect when turned out.  Of course, it smells pretty good too and we are all looking forward to the official tasting!
Posted by Happy Hamby Campers at 11:54 No comments:


There was considerable disappointment last year that Elmer wasn't decked out as a reindeer for our Yowah Christmas/New Year adventure. The notion came to us quite late in the preparations, after shops had sold all their antler stock (and we did ring quite a few, just to check)!

The night prior to departure, Nick wrapped Elmer's bullbar with tinsel.  Even that simple gesture drew a fair amount of attention on the roads, though Elmer generally does get looked at!

We were determined not to miss out this year.  Nick and I spotted the set of car antlers back in November - and they have been safely stashed since. The ongoing rain interfered considerably with Elmer's costuming but clear skies this afternoon saw us dressing him for the festive season!
Posted by Happy Hamby Campers at 19:15 No comments:

As much as we would like to be on the road/camping more often we have work, school, Uni/TAFE (and other) commitments. When we aren't traveling, we spend time researching destinations and sometimes just enjoying stories of other people's adventures.

We have made good use of the library throughout the year and borrowed a number of 4WD trekking DVDs. In amongst those was 'Too Long In The Bush - Len Beadell Looks Back', which we highly recommend.  'Len Beadell is regarded as the "last true Australian Explorer" for opening up over 2.5 million square kilometres of rugged Australian Outback.'

Since watching that DVD we borrowed one of his audio books, which we also thoroughly enjoyed.  The library stocks many of his (printed) books and praps we might get to read them over the Christmas break.
Posted by Happy Hamby Campers at 23:16 No comments: 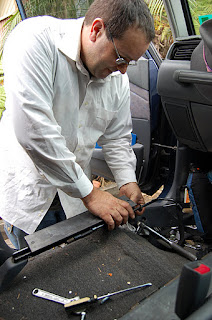 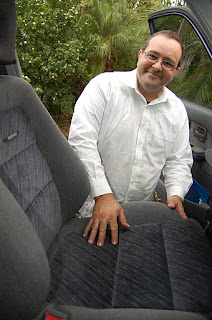 Prior to heading up to Yowah last December, we bought Elmer two lumbar support cushions from SuperCheap Auto - one for each front seat. The total outlay was $30.00, in keeping with our budget at the time! While the support cushions were an improvement on using the seats without enhancement, our backs were still crying out for a far greater degree of comfort.

In early December Nick spotted some older model Recaro seats on eBay, which we subsequently won at auction. Nick's first welding project was to modify Elmer's existing rails to suit our "new" seats. We now sit slightly higher than previously and although we are yet to drive a long haul, the seat swap-out seems a very worthwhile exercise. (The old seats have sold on eBay to offset the cost of the changeover).
Posted by Happy Hamby Campers at 22:17 No comments: