The afternoon scone success inspired me to try another experiment, something else I had been thinking of trying for a while - a self-saucing pudding.  I found this video and decided the method could be adapted for one of my usual recipes.

These days chocolate and/or coffee give me an instant headache, so are best avoided - sadly!  (Of course, my faithful taste-testers have no aversion to chocolate but where's the fun in cheffing if the chef misses out on the sampling)?!

I spread the batter evenly into the top (greased) pot and arranged pear slices over the surface.  Our fridge is currently overflowing with pears, so I took the opportunity to reduce the stockpile - if only by one!

The sauce was then poured over the batter, via the back of a spoon for more gentle distribution.  The large pot was about three-quarters full of water and had been simmering on a hotplate while I prepared the pudding.  I placed the top pot into the bottom pot, put the lid on and left the pudding to stand over the simmering water for about 20 minutes.  I then transferred both pots to the thermal cooker for a further 60 minutes, before "plating up" with custard.

Mmmmm - another success!
Posted by Happy Hamby Campers at 22:20 No comments:

I've been meaning to try scones in the thermal cooker for quite some time - probably since a fellow camper raved about them in July last year!

I used the Thermal Cookware recipe for Golden Syrup Scones - with a few modifications to the method, as though I own the Thermal Cookware insulated bag, I don't have the Thermos Shuttle Chef cooker it (and the recipe) was intended for.  The recipe lists an egg in the ingredients but doesn't include any further instructions, so I mixed the egg and milk before adding them together.

My thermal cooker (purchased from Aldi) has two inner pots, one large/deep and the second much shallower.  I greased the top, smaller pot for the scones and used the larger pot for hot water - about three-quarters full.  The scones simmered on the stove top for about 25 minutes (covered) before both pots were moved into the insulated thermal cooker.  I expect the scones would have been ready after another 30 minutes but we left them in the cooker for around 90 minutes, with no ill effect.

The mixture was more the texture of dumplings than scones, so I was keen to sample the end result.  They are different to what I usually make but quite nice.  Erin declared them "tasty" and Nick also commented favourably - therefore the experiment was a success!
Posted by Happy Hamby Campers at 18:32 No comments: 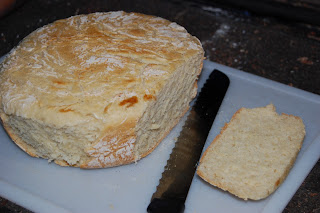 Given our successful K.I.S.S damper back in July, we wanted to try for a repeat performance - and were even more chuffed with this effort!  There were no burnt edges and the crumb (technical bread-talk!) was quite fine.  Hooray!
Posted by Happy Hamby Campers at 20:00 No comments:

Our last camp oven roast cooking experiment had been with a piece of beef, so we tried a lamb shoulder this time - studded with rosemary and garlic.

I had watched quite a few YouTube camp oven cooking videos in the lead-up to our "forest finale" and the common theme for roasting pumpkin was to leave the skin on, to prevent the flesh from falling to pieces as it cooked.  (The pumpkin pieces fell through the trivet last time and then burned on the bottom of the oven, imparting a not entirely unpleasant smokiness to the meat)! We tested the skin-on theory this trip and it worked very well - though Nick and Erin are not at all keen to eat the pumpkin skin!

In addition to the pumpkin we roasted potatoes, sweet potatoes and carrots.  Green beans and gravy were cooked over the fire in billies.   Yes, it was a feast!

Of course, it is a sign of how good everything looked/smelled that there are no shots of the finished product or the "plating up"!
Posted by Happy Hamby Campers at 19:30 No comments: 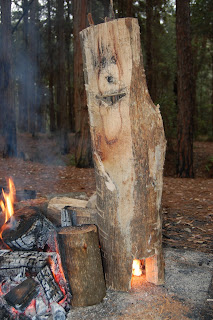 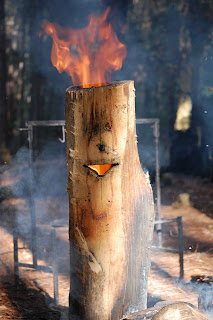 Nick found a mostly hollow log when out cutting wood for our camp oven experiments - and so we commandeered that piece for an impromptu fire sculpture.

Nick cut mini legs and a mouth with the chainsaw, then Vaughan drew a face with charcoal. We had forgotten to bring the block-splitter, so bottle-cap eyes weren't an option (much to Vaughan's disappointment). Even so it was a pretty good effort, though not as long-lasting as some of our other creations.
Posted by Happy Hamby Campers at 17:00 No comments:

We returned from "the Ridge" with just a few days left of school before the term break.

Unfortunately, we were a bunch of sickies over the holiday fortnight so our vague plan of several nights forest camping was revised to a day trip, which we enjoyed on the last day. It was a fairly laid-back adventure, which definitely suited our energy levels!

Vaughan and I decorated cup-cakes that I had made the night before. Nick collected fire wood and we all poked the fire into coal-production for our camp oven roast dinner.

In between times we checked on the Bower Bird's bower, netted for tadpoles (on a catch and release basis), fed the currawongs and spotted for lizards!
Posted by Happy Hamby Campers at 02:00 No comments: