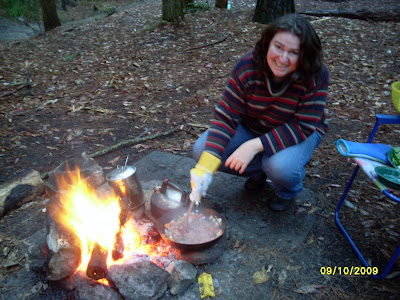 Although we had purchased a dual fuel stove in January 2009 (in case of an open fire ban, given our departure the next day), we are a family of fire bugs and generally prefer to cook over a wood fire.  In the early days, our cooking method was quite basic and presented a few challenges.

As you can see, the difficulty with the above set-up is that one side of the wok was incredibly hot and the other - not!!

After considerable research, we discovered the Maxi BBQ.  We gifted ourselves one for Christmas (2009).  It has been used often since - and admired by many fellow campers!
Posted by Happy Hamby Campers at 22:52 No comments: 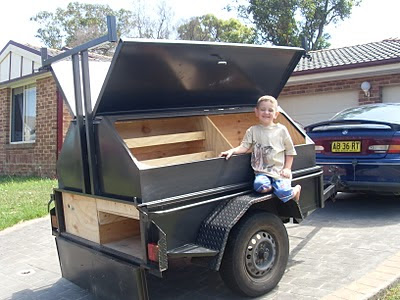 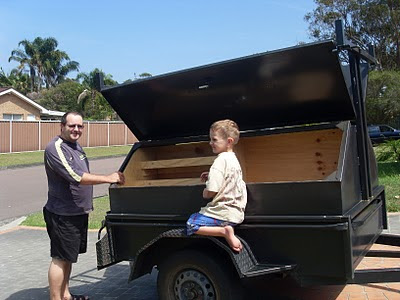 Finally - we won a trailer!  Nick and Vaughan left super-early (5.30am) and headed down to Sydney to collect our wonderful new eBay acquisition! When they arrived home again mid-morning, Vaughan dragged me out the front door, super-keen to show me all the trailer's features!

The previous owner was a carpenter and had purpose-built the trailer only 8 months previously.  However he worked in Sydney - and it didn't work to try and find trailer parking around the city.  His loss was very much our gain.

Although the trailer is shown here with all the various divisions, Nick soon took them out and recycled the wood for a layout better suited to camping.  He also fashioned a large trestle-style table to rest upon the trailer racks while traveling (creating a platform for additional luggage) - and a box to sit just on the towing frame (safely storing a gas bottle and water carriers).
Posted by Happy Hamby Campers at 22:28 No comments: