We were only home from Lithgow a few days when Aldi very obligingly had a sale on their wool doonas - so much cheaper than buying them from the farmer at Ironfest.  As much as we would have liked to support his home industry, our budget liked Aldi's prices a lot more!

The 3 degree tent temperature was still very fresh in our memory and we purchased two king-sized doonas as they had the (now proven) reputation of being much warmer than our feather versions.  We have used one at home and even in the winter, it verges on being too hot at times.  For camping though, we felt they would be perfect!
Posted by Happy Hamby Campers at 19:34 No comments: 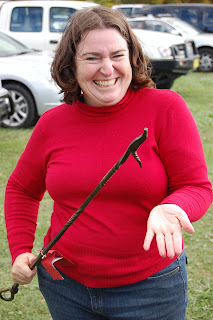 As you would expect, there were several blacksmiths at Ironfest.  Given my family of fire-bugs, our camping fires can be quite enthusiastic at times so I have wanted a substantial (and long!) poker for ages. Fortunately we were able to acquire one that was suitably impressive on a number of counts.  We have tested it thoroughly and it is now compulsory camp equipment (with fellow-campers looking on in admiration)!
Posted by Happy Hamby Campers at 02:00 No comments:

"Lithgow has a bracing climate."

Hah!  There's a euphemism for "pack your thermal underwear"!  No pics of our long-johns on this slide-show but quite a few of Ironfest as well as our accommodation, a local lookout and our drive through the gorgeous Wolgan Valley to Newnes.

There is a bit of information about Newnes at the website below.  It was a very interesting place and we may well return to stay in one of their cabins at some later stage.  (The wild wombat was a definite highlight)!


http://www.lisp.com.au/~newnes/about.html
Posted by Happy Hamby Campers at 01:30 No comments:

We loved Ironfest!  There was so much to look at - the jousting in centre ring, very neat street performers, many costumed people, hand-to-hand combat displays, battle of Lithgow enactment, wood-chopping and lots more.  In the various halls and tents were belly-dancing and some very clever iron (and other) craft.

Although we bought a three-day pass and didn't manage a third visit on Monday, we still felt we had well and truly gained our money's worth.  Of course, if we had made the Monday visit I am sure we would have still found new things to see.

We arrived on Friday around 3pm and set up fairly quickly.  Our tea had been cooking en route in the thermal cooker, which was very civilised!  Nothing flash, just spaghetti bolognaise but very much appreciated after setting up.  We did a bit of shopping that night and bought bits for Saturday.  Saturday's tea was chucked in the thermal cooker again before heading out that morning.  It was so nice to come "home" and do minimal cooking after playing all day. 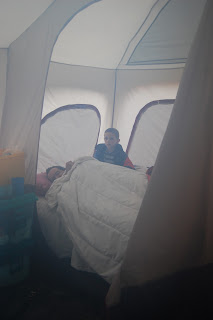 It was a lovely trip.  The weather was better (for the most part) than previous visits and we were generally much better prepared, so I found much to like about Lithgow and the surrounding areas.  There were lots of autumn leaves as we drove out there - and a few different varieties in the place we stayed.

I was very pleased we had bought the thermal underwear though!  On our last night the temperature was 14 degrees inside the tent at bedtime, 5 degrees at 5am and a very frigid 3 degrees by 7:30am!
Posted by Happy Hamby Campers at 01:00 No comments:


Nick had worked a lot of overtime during Easter, which resulted in a very welcome bonus just before the Anzac long weekend. Happily, Erin's school had co-operated with Nick's roster so we had 4 days available for a short break.

Choosing a destination was trickier but we were alerted to the Lithgow Ironfest (with international jousting tournaments) and decided that was the place to be/go! I had visited Lithgow a couple of times and remembered it only as very, very cold.

We bought thermal underwear in preparation - a lot of thermal underwear. Fortunately one of the camping stores had a sale on long-johns etc, so we got twice as much insulation for our bucks/butts!
Posted by Happy Hamby Campers at 00:30 No comments:

Email ThisBlogThis!Share to TwitterShare to FacebookShare to Pinterest
Labels: April

I was very impressed when Aldi had a camping sale last year, which included camping saucepans and a thermal cooker.  I had read a lot about thermal cookers but the Dreampot was several hundred dollars - definitely outside our budget, particularly given I wasn't sure how useful an item it would be.  Aldi's price was a lot more budget-friendly, around a third the cost of a Dreampot but virtually the same from my research.  (Aldi have just run the special again this year for $20 less, though I couldn't convince Nick we needed two)!

What's a thermal cooker?!  It is like a huge thermos, you cook something in the inner pot for 15-20 mins then put inside the thermal "cooker" to finish off.  Hours later it is still hot and similar to a crockpot dinner.

I had tried it a few times at home but was still a bit daunted by the concept, so it wasn't until April 2010 that I really started to experiment - with rather satisfying results!

The link is for a short video, showing how a very simple chilli con carne is cheffed in the Shuttle Chef (another brand of thermal cooker).  The principle is the same regardless of the brand and there is a wealth of information available on the internet, once you start Googling!


http://www.youtube.com/watch?v=EU_k1rrg4r4
Posted by Happy Hamby Campers at 00:05 No comments: