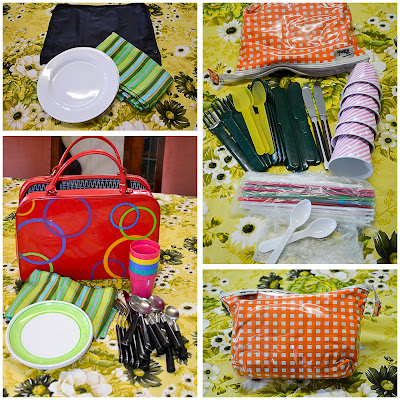 Yesterday's picnic case upgrade has prompted a reshuffle of my "emergency picnic kits".

Emergency picnic kit?! Yep, every car should have one!

I've explained the concept in the link above. As much as we plan picnics, there are times when we don't.  It's handy to have items on hand to save buying disposable cups, cutlery etc.

My kookaburra picnic case came with four large white and four smaller striped melamine plates, as well as a large black zipped pouch. The smaller plates are now in the box of trix kit (which lives in our smaller car), along with the cutlery from the red picnic suitcase.

The black zipped pouch is divided into two pockets. The larger one holds the plates and the other is just the right size for a small tablecloth - as long as I do some careful folding. I'll tuck the pouch into Elmer's passenger door pocket. Elmer's glove-box houses the orange-check shower bag (which once belonged to Nissa). It has a selection of plastic cutlery, straws and pink-striped melamine cups.

The cups were another op-shop bargain, at 50-cents each and are quite nice to drink from, even though they are pink!  We've used them as impromptu yoghurt pots quite successfully when we've bought a larger tub to share.
Posted by Happy Hamby Campers at 11:55 No comments: 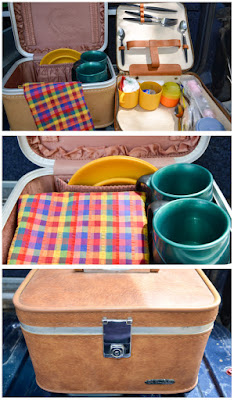 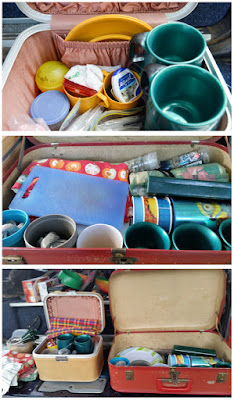 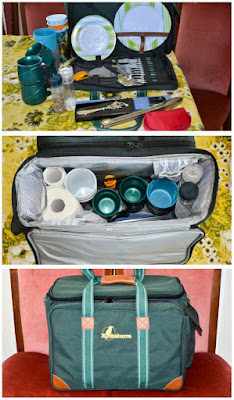 When I bought my red suitcase I had plans of crafting it into a you-beaut picnic case. There was talk of ply divisions to hold the contents more firmly but we didn't get around to that. The case has done good service over the past four-plus years but is now planned for retirement.

In November 2015, I upgraded my beverage case.  I was a little reluctant to make the switch but the "new" case is a bit bigger and the deeper, upright format is great. I pack everything in and when the case is next opened, all items are in the same place. Neat!

The contents of the red case don't fare so well in transit. I pack plates, cups etc as shown in the pics at right. Everything jumbles together immediately after the lid closes and the case is stood up ready for departure.

Nick and I spotted a green soft-sided esky/picnic bag at an op-shop last year. It was in excellent condition and seemed a bargain at $15.00. (Some plates, cups and cutlery were also included but I may yet re-purpose them).  It has a top opening lid and lots of pockets.  The kookaburra emblem on the outside is another bonus!

I've mostly transferred to the kookaburra case now and we'll take the upgrade for a test-run today.  My picnic plates are not quite the right size for the holders but that's OK.  The tablecloth is in that front section along with the included cutlery.  There is a side pocket on the outside of the bag which is the right size for a pack of serviettes.  The small red zip pouch holds tablecloth clips and it's in the same pocket.

The middle (insulated) section of the bag holds paper towel, BBQ scraper and tongs, longer sharp knife and bread knife in a home-made denim sheath, chopping board, various cups and my "happiness spreader".

Mesh pockets in that section are sewn-in. I haven't used all of them. One is housing plastic bags (handy for rubbish and dirty dishes). Another has our salt and pepper grinders. There's space left for provisions, though we usually carry them separately.

I'm liking the new organisation.  I expect there'll be fine-tuning as some standard inclusions are MIA from our relocation shuffle.  I'll probably add a few extra cutlery pieces and try to find the small sharp knife (which lives in a green toothbrush box).
Posted by Happy Hamby Campers at 11:57 No comments: 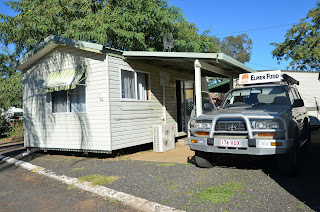 In case you've missed it, I have a Camp Cooking tab on this blog - it's a good index to various camp cooking and picnic provisioning posts.  I refer to it from time to time and try to update the links regularly.  Although I've mentioned menu planning in broad terms, I haven't given more detailed examples - so will try to do that.

I save my camping menu plans in Excel and revamp them for new trips. They are sometimes printed but I generally take my laptop with me (for photo processing), so can refer to the plan on-screen if necessary.  Having a plan means I know exactly what to prepare, cook and pack, which is a great help.

It's always my aim to eat well with minimal effort on-site.  I don't mind putting in a bit of extra time at home if it means I can cruise through the holiday.  However, there isn't anything greatly tricky about these preparations and basically I pottered along getting ready, highlighting the packed parts of the menu plan as I completed them.

In the week prior to our departure I made a boiled fruit cake. It was divided up into containers and frozen.  The equivalent of a large loaf cake came away with us and the rest stayed in the home freezer to use for picnics etc. Pikelets were made, cut into heart shapes and flash frozen.  I poached four large chicken breasts, using Mimi's method, here.  These also were packed into containers and frozen. (This was plenty for two full lunches for the four of us with some left-over for a couple of simple sandwiches on Monday night).

Basically anything that could be frozen, was!  We have two Engel fridges.  One of those is currently in use at home as a freezer.  It sits on top of it's twin, so is a good working height.  We took it away with us, in freezer mode.  Once at the cabin, it sat beside the standard fridge and we defrosted items as necessary.  It was filled with:-


We had an esky with milk, fruit juice, butter, olive oil spread, cream and sour cream, cheese, eggs, marinated fetta and a few other things.  The esky isn't huge so the juice poppers went into an insulated lunch box, which was more easily accesible en route.

I'd packed non-perishable food into three plastic boxes.  There was a small amount of alcohol, some mineral water and soft drinks.  We usually travel with a teapot and limited (!) selection of tea, plus coffee and hot chocolate. I took a few plastic containers of cereal. Corn chips, biscuits and snacks were other items.

We were staying over a long weekend and I was keen not to spend much time buying extra groceries after arrival! I'm often guilty of over-catering though, so really tried to take just what was needed.  The fish fingers didn't get eaten cos Vaughan wasn't hungry on Friday night (he isn't a fan of nachos).  I could have left the soup at home, too.  Overall, I reckon I did OK!

On Saturday at Dalby I bought watermelon, a rainbow salad pre-pack, peri-peri mayonnaise and bottled water (cos the cabin water wasn't wonderful for drinking straight from the tap).

How did it all fit together?  This was pretty much my plan:-

Afternoon tea - party pies and sausage rolls pre-heated at home and transported by thermal cooker.  These were served by the road as Nick and Vaughan changed a flat tyre!  Tomato and BBQ sauce were available.  I'd packed some individual-serve fruit juices in an insulated lunch-box with an ice-brick, so we drank those.

Dinner -   The frozen nachos mix had been used as an ice brick in transit.  Nick reheated it in the microwave on Friday night, for serving with corn chips, guacamole and grated cheese.  Erin made the guacamole on site.  I'd packed grated cheese into a small container, so this was a very easy meal.

Breakfast - heart pikelets from the freezer, zapped in the microwave and served with lemon/sugar, raspberry jam, or golden/maple syrup.  We had a pot of tea (complete with tea cosy)!

Lunch - poached chicken and salad wraps, along with a large plate of watermelon.

Dinner - BBQ steak, sausages and onions served with packet pasta and herbed zucchini (cooked in foil on the BBQ).  Dessert was UHT custard and tinned fruit.

Breakfast - Nick cooked bacon, chipolatas, hash browns and one large tomato on the BBQ.  I used the cabin hotplate to cook scrambled eggs, which were served with some smashed fetta and scattered sun-dried tomatoes.  Erin made toast and our combined efforts were very well received!

Dinner - chicken sticks cooked on the BBQ, served with flavoured rice.  I'd pre-measured rice with a couple of teaspoons of stock powder into a container - ready to be cooked in the microwave.  I had intended to buy salad or steam vegie packs as a side dish but couldn't be bothered going shopping after our long drive!

I'd hadn't fully planned lunch as I thought we might stop on the way home.  As it happened we ate chips, apples and fruit-cake in the car as we drove along.  It wasn't ideal but we'd lingered a bit longer than intended at Dalby and really needed to get home for Nick's sleep before night-shift.

I may pre-make and freeze a box of sandwiches for next trip. Something easy that could defrost during the departure morning and wouldn't take much time to eat at a quick stop or that we could have in the car while travelling.  Home-cooked corn-beef with home-made relish would work.  (I cut the sandwiches differently to indicate those with relish and those without - eg, rectangles vs triangles).
Posted by Happy Hamby Campers at 15:58 No comments: 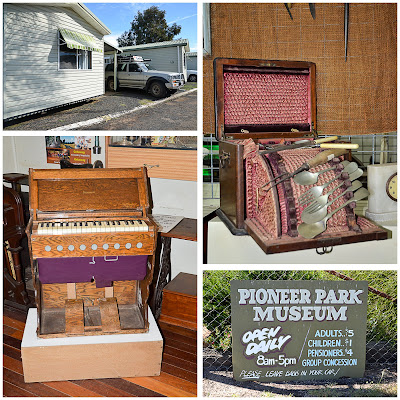 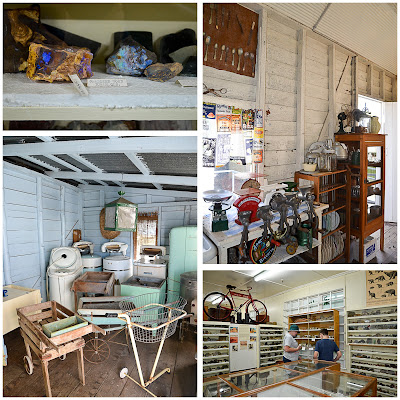 We stayed at the Pioneer Caravan Park, just across the road from the Pioneer Park Museum. Among their collection is a dinosaur egg and we were keen to it!

After packing up, we spent some time at the museum. Bandit was welcomed as a well-behaved dog and we all enjoyed poking around the extensive displays. We would have happily amused ourselves for longer but we needed to make it home by early afternoon, due to Nick's night-shift.

We spotted the dinosaur egg and lots of interesting rock specimens, including an opal from Yowah! My favourite displayed pieces were a fold-up piano that packed down to a size suitable for transporting in a car boot - and a rather neat cutlery canteen.
Posted by Happy Hamby Campers at 11:45 No comments: