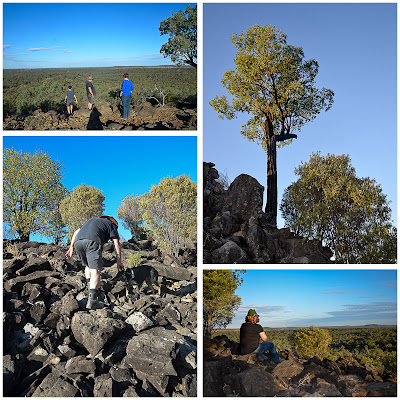 I had read a short paragraph about the Policeman's Knob lookout in a visitor guide. The location was roughly marked on a free "treasure map".  There were GPS co-ordinates but our GPS was MIA and our phones didn't have sufficient coverage to use.

Given the lookout was marked on the local tourist map, we thought it's location might be actually sign-posted or at least commonly known to the local residents!  Hah!  We mucked up our first attempt, so circled back for another go.  That wasn't successful either and we asked again for directions in Rubyvale, firstly from a non-local who directed us to to the local cafe where we received clearer pointers.

We thought we were set, till we drove up a dusty track into an out-of-the-way camp, guarded by a couple of chained dogs.  We weren't sure we'd be welcomed but a lady came out of her van and walked over to us.  She confirmed the lookout would be worth our efforts and said we were quite close to getting there. (Seemingly she'd put a sign up indicating the right direction but it had been stolen)!

Fourth time lucky!  It was a beautiful spot.  We left Elmer in a clearing and clambered up the rest of the way.  There were many little wallabies scarpering quickly over the rocks.  Bandit was similarly sure-footed, albeit a bit slower.  The rest of us were far less graceful!

I'd carried my tripod up, hoping for a group shot but we were out of sorts with each other by that stage.  Instead I spent time sitting quietly, observing the wallabies and the pretty light through the leaves.
Posted by Happy Hamby Campers at 15:30