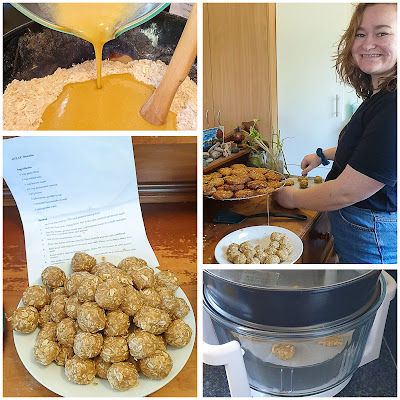 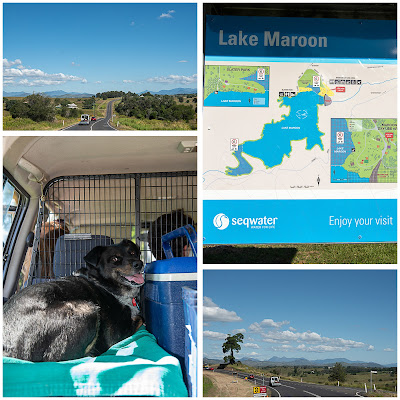 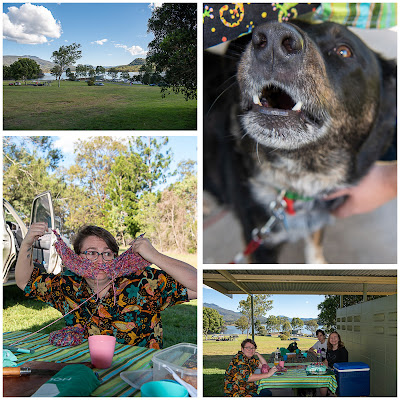 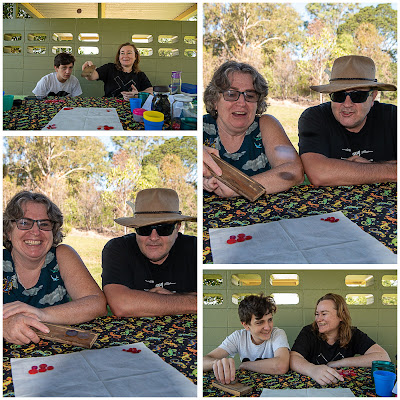 Nissa flew in the day before ANZAC Day and one of our first morning's missions was to make ANZAC biccies together.
Our free-standing oven had some issues, so we baked about 65 biscuits in the benchtop turbo oven - seven in a batch. Each group only needed about 12 minutes cooking time, so swapping out trays was a bit fiddly but otherwise all worked well.
I've just checked and our Yowah fuel stove ANZAC biccies were made using smaller "trays", though we could fit several trays in the oven at once.
Once all the biccies were baked, we packed up some to take with us for a later lunch picnic.
Given the public holiday, I planned to pick up some picnic supplies at a large IGA in Boonah, en route to Lake Maroon.
Not long before departure I thought to ask Nick for some pennies.  He was able to find some as well as a scrap of wood - and I printed off two-up rules from the internet.  I printed off two sets of rules, cos the first set talked of three pennies which seemed like three-up, not two-up!
I'd never played before and neither had anyone else.  We modified the rules a bit, so as to play at our picnic table.
No money changed hands, only buttons!
Erin wasn't keen to play, so watched our antics while doing her knitting.
Bandit didn't play either but tried hard  to join in - and his noisy barking added to the hilarity!
Posted by Happy Hamby Campers at 14:19 No comments:

Life's a picnic (or a cafe lunch)! 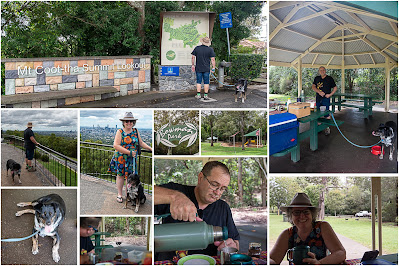 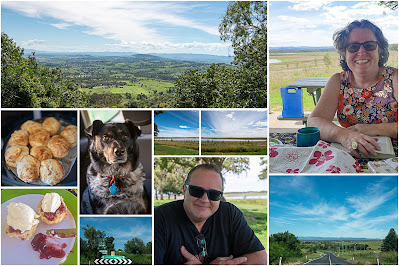 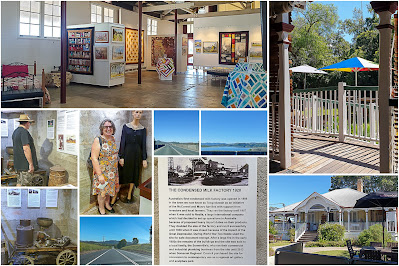 After our splendid January adventures, February was busy getting back into our normal work and school routines.  As always, there were outings but those were not really in keeping with the scope of this blog.
Nick and I also enjoyed a lovely weekend away - though the focus of that break was his performance at the Songwriters Showcase.
There was lots of rain in March and we took advantage of a dry day for a school hours picnic, fairly close to home.  We dined well on wraps made with leftover roast dinner meat and vegies - and Bandit was happy we'd packed a treat for him also!
A few days later I made scones and packed another lunch for some exploring further afield.  I had thought we might try to see somewhere new but after huge hilarity at the GPS "assistance" we ended up back at Atkinson Dam where we've visited on a few other occasions.  There was a bit more water after all the rain and it was very pleasant to sit watching the little birds flit about.
In contrast to those organised picnic outings we had a wonderful, impromptu adventure this week.  We headed to our local Bunnings (less than 10km up the road), made a small purchase - and then decided it was too nice a day to spend at home, so continued in a westerly direction!
We didn't have a plan but enjoyed blue sky, sunshine and lots of pretty scenery as we drove along. We chanced on a wonderful lunch spot, the Nash Gallery & Cafe at Esk, with many birds chattering away (and stealing leftovers when they could).
There were a couple of local art exhibitions at the two information centres we stopped at.  We'd called in at Esk at other times but hadn't previously visited The Condensary at Toogoolawah, which caused some discussion as we parked.  It really was a former condensed milk factory - Australia's first!  As well as the exhibition there was a small history display in a former bomb shelter inside the shed - and we looked at that also.
We headed back slowly, poking about in a few opshops and finding a few bargains.  By the time we arrived home in the later afternoon we'd made a 180 km round trip, substantially bigger than our original/planned 18 km quick loop to Bunnings!
Posted by Happy Hamby Campers at 12:15 No comments: 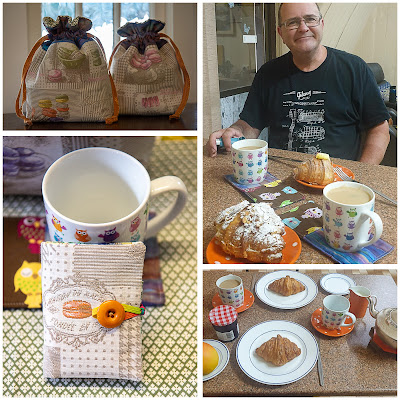 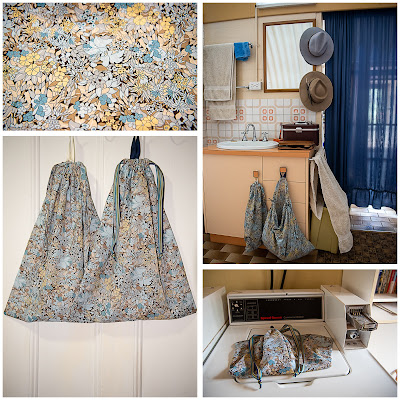 There's sometimes a cross-over between here and my other blog, Hamby Home(in)stead.
I made two padded drawstring bags the week before we came away, as well as a set of simple laundry bags. Our bunker trip was their first outing - and all four worked very well!
We'd stopped at a great bakery in Toowoomba on the way out to Miles, so enjoyed specialty croissants on arrival, using our owl mugs and mug rugs.  (The spotted saucers and orange milk jug were at the bunker).
The owl mugs were used again for the next morning's late brekkie, with more excellent croissants - and often during our stay, sans croissants!
We'd used dry bags for our washing on last year's wing-it wanderings tour (and a grocery bag while on our anniversary splurge!) but I wanted something smaller/nicer for our shorter road-trips.  We'd originally packed for a four-night stay and I wasn't sure if the bags would be large enough but they seemed a good size. (They are intended for light and dark, rather than his and hers).
When we extended to an extra night, we took our washing up to the laundry.  The dark bag was full and we did that load, then went out for some more exploring.  There had been a few spots of rain as we drove back but when we reached the clothesline, most of our washing had been retrieved for us.  How good is that?!
Posted by Happy Hamby Campers at 20:01 No comments: 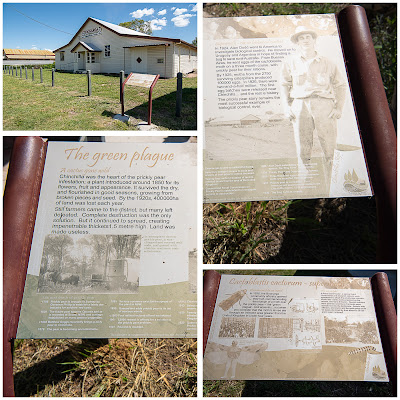 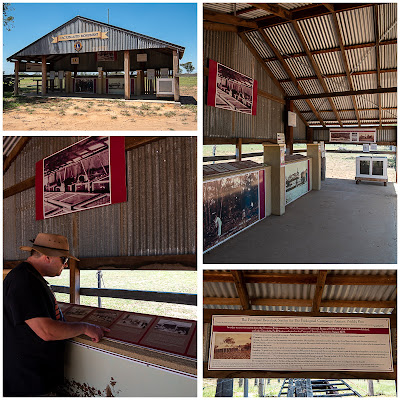 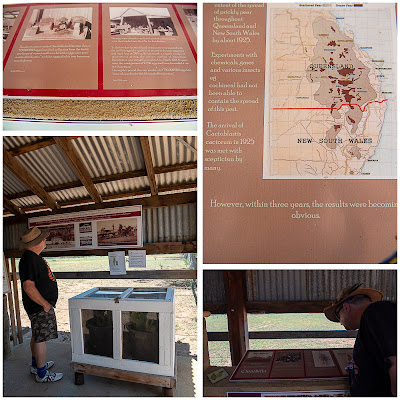 The Boonarga Cactoblastis Memorial Hall was built in 1936 by local farmers, to recognise the success of the moth in eradicating the prickly pear plague throughout rural Australia.
You can read an excellent history of prickly pear, here).
We made a very quick stop at the Cactoblastis Memorial Hall on the way out to Miles.  It had been on my list since reading about it at Dalby in 2017, while visiting the cactoblastis monument.
Usually we spot the hall as we zip past but we were more on-the-ball this time.
We detoured into Chinchilla on the way home, keen to view the "Bug Farm" replica shed, which was detailed in our "Explore Chinchilla" brochure.
The two sites are quite separate from each other, about 17.5km apart.
It was such a great display and we were very happy to have made a visit.
(And there was a geocache nearby also - which was another bonus, bringing our tally to 677 finds)!
"The cactoblastis moth and its larvae eradicated the nuisance plant, the "prickly pear" which covered much of Queensland's farm land in the early 1900s.  A monument and replica shed is located near the entrance to the property "The Shanti" on Clarkee's Road which operated as a Field Station to breed the moth in the early 1930s."
We hadn't previously visited Chinchilla, though we camped at the Weir on the way home from Roma in 2018.  We had a bit of a wander around the town after leaving the bug shed.  It seemed a good time to have lunch, so we did that under some trees near the art gallery - and then viewed the current exhibition when we finished our pastries.  I'm thinking we'll return to Chinchilla for a few days, hopefully soon - and have a better look around the area.
Posted by Happy Hamby Campers at 14:00 No comments: 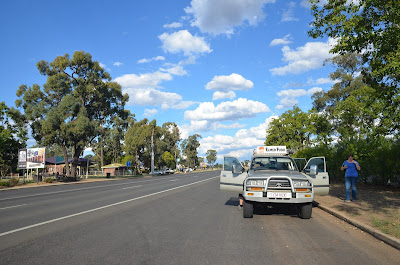 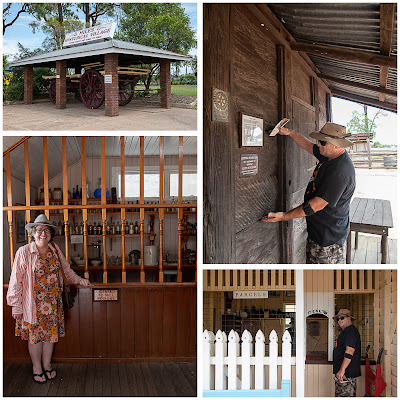 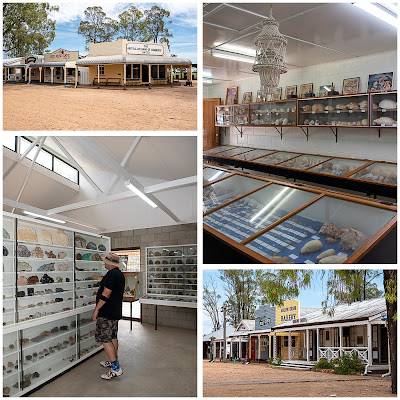 The town's premier attraction is the excellent Miles Historical Village and Museum in Murilla Street  ..."
We've made a few rest stops at Miles on other trips, parking beside or across from the museum (top pic is from our Roma roaming in 2018) - but we hadn't visited due to time constraints.
When speaking with a tourist information volunteer (after visiting Chinaman's Lagoon), she advised the museum opened at 8:30am and an early morning visit was best, before temperatures rose.
We liked that plan and arrived the next day, not long after the doors opened. Lots of interesting stuff to see and we spent a couple of hours looking at various displays before deciding we'd like a break in some air-conditioning!
The Historical Village is " ... an accurate recreation of a Queensland country town's main street at the turn of the century, which contains over thirty buildings including a bootery, post office, a general store, bakery, the Union Hotel, a butcher's shop and a dairy. The complex also features the old Australian Bank of Commerce, the Dalwogan siding with a steam locomotive, the Red Rose cafe (a replica of the first Greek cafe in the town which opened in 1925) and Andersen's Smithy where the famous Condamine Bell was first made."
Posted by Happy Hamby Campers at 12:00 No comments: 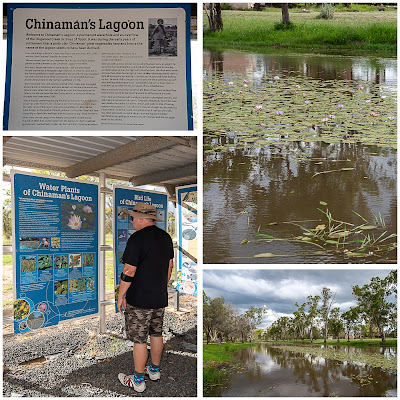 We made a quick stop at Chinaman's Lagoon as part of our Condamine Bell tour (previous post) but other people were reading the signage at that time, so we returned much later in the day.
I read about the water lilies, though it seemed to me there were some blue ring-ins flowering with the rare pink variety!
In the summer and early autumn the lagoon puts on a spectacular display of rare pink water lilies (nymphaea gigantea), a variety of lily that usually only appears as blue or white. These pink lilies are so rare that they have been classified as rare and endangered.
The lagoon was named for Sam Ah Sun and his story is included on one of the large information boards.  Although we were amused by some of the visual humour of the anecdotes shared there, the reference to opium use and charges was new information to us, so prompted further research afterwards - and we've learned some sad facts as a result of those investigations.
Posted by Happy Hamby Campers at 18:00 No comments: 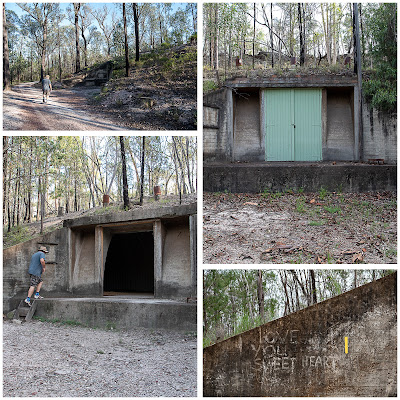 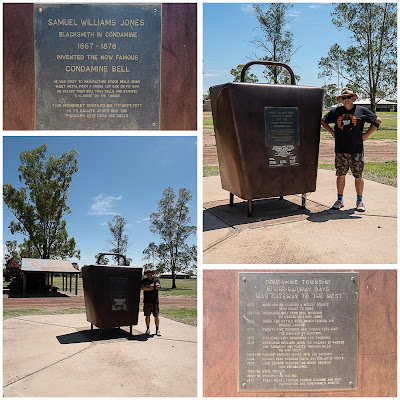 We were awake much earlier on our second morning, so did a 4km loop walk around the property before breakfast. It was good to see the many bunkers - and be able to view an empty one, left in it's original state.
The owners live in a larger 40-foot bunker, ours and two other 20-foot bunkers are available as accommodation, there was a games room and disused dining room also.  (Others were used for storage).
We'd enjoyed the wildflower tour so much, we decided to do the Condamine Bell Tour.  The drive followed standard sealed roads and although there were interesting facts along the way we much preferred the previous day's exploring.  Yep, give us dirt roads and make us happy!
We returned to Miles from Condamine, rather than traveling on to the Caliguel Lagoon and then an extra 80km to view the Myall Park Botanic Gardens.  We'll save those sights for another trip.
Posted by Happy Hamby Campers at 12:00 No comments: