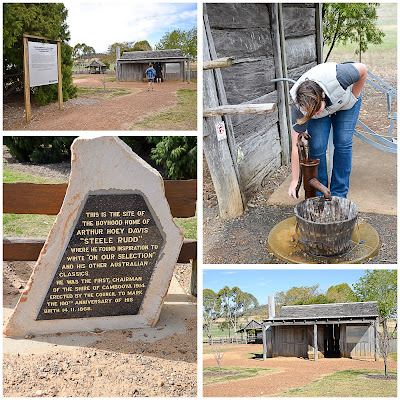 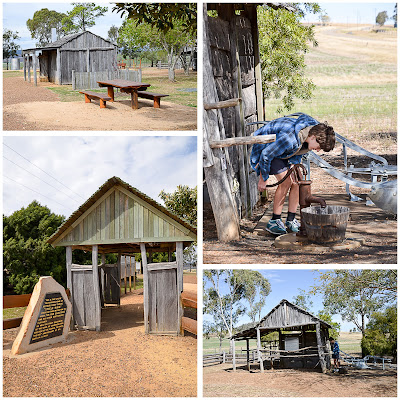 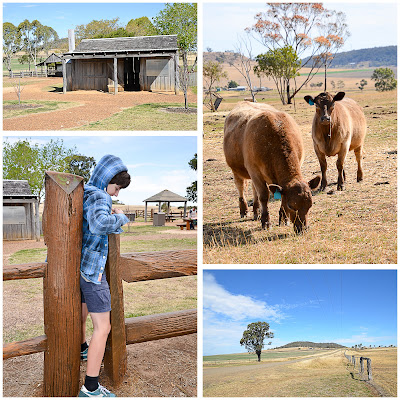 We left Heifer Creek at around 12:30 and were in no hurry to head home.  (Well, the majority were happy to meander but one of us was keen to return to base and start playing MineCraft)!

After about an hour of driving, we saw a sign for Steele Rudd Park so did a u-turn and drove down a side road to visit.

What a lovely spot! The flushing loo was appreciated and we all enjoyed walking around the displays before and after our picnic lunch.

You can read some of Steele Rudd's biography, here.  I remember studying a little of his work when at Uni.

"On Our Selection" is available as an audio book.  I'm looking to obtain a copy for family enjoyment.

My childhood was TV-free for long stretches but my family used to listen to various radio comedy (the Goon Show was a big favourite).

I don't remember the Dad and Dave episodes as strongly but the duo was definitely familiar because my brother and I were always highly amused whenever my father's work partner, Dave, rang to speak with Dad!

It was our first visit to this area.  We drove through some gorgeous country and I'm sure we'll return for further exploration.
Posted by Happy Hamby Campers at 15:30 No comments:

Thiess is the life! 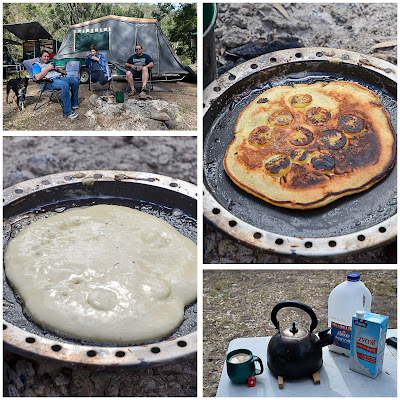 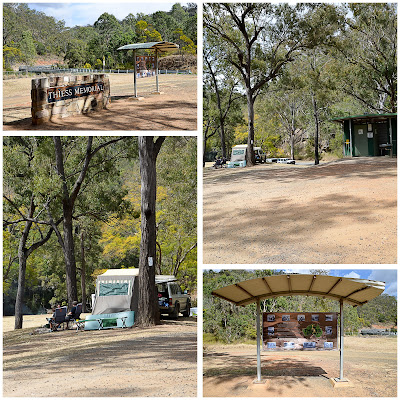 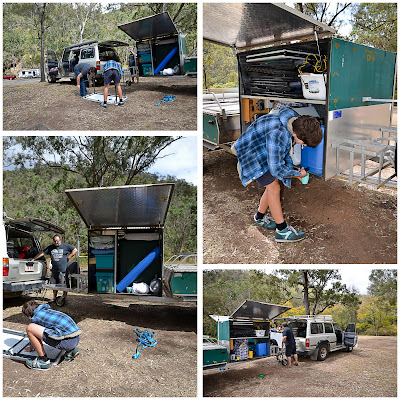 It was an interesting first night. Nick's blood sugar had dropped in the wee small hours and he needed to extricate himself from our bed, around the stretchers and out the door in search of his monitor and a suitable snack.

When Nick came back, I asked him to retrieve Vaughan's blanket from the floor and recover our boy. Bandit thought Vaughan needed protecting and in performing a "rescue", stepped rather heavily on Erin's face!

We woke much later to birdsong and sunshine.  The fire was kicked over to boil the kettle and after cleaning our Cobb Cooker plate, I made banana pikelets - which were cooked over the coals.  Yum!

This time I had measured the dry pikelet ingredients into a rectangular lidded jug. When the water, eggs and golden syrup were added and mixed, I could pour directly from the jug to the hotplate.  I used a balloon whisk for beating but will source a flat version to better reach mixture lodged in the jug's corners.

We stayed at Heifer Creek Rest Area, a free 48-hour-stay camp area.  There is a memorial to the Thiess brothers at the entrance to the site, which was interesting reading.  (The Heifer Creek cut was quite impressive when we drove through the previous afternoon but I failed to get a good shot of it through Elmer's windscreen).

While the rest of us sat about Vaughan explored some of the rocks on the other side of the creek, getting hooked by lantana in the process.  We'd picked a pretty spot for our first camper trailer experience and we took our time appreciating the scenery before packing up.
Posted by Happy Hamby Campers at 13:00 No comments: 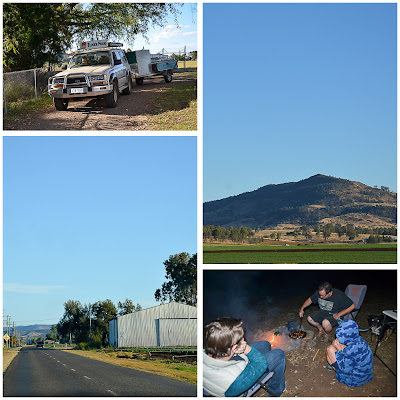 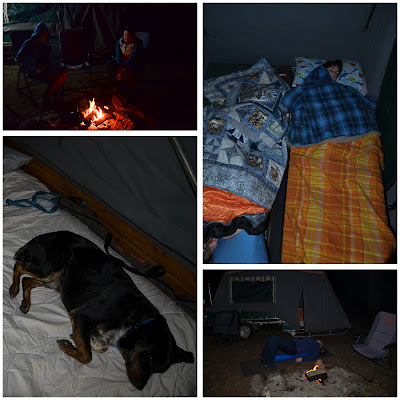 I finalised the camper trailer registration on Friday and Nick secured the number plate on Saturday morning. It had been a big week for us but we were keen to take our newly registered trailer somewhere!

Nick and I consulted our camping guides as well as googling possible places.  We settled on Heifer Creek, a free camp area just over an hour from home.

It was just as well we didn't plan to go too far because it was 4:00pm before we left the driveway!

Although we were based in caravan and tent from September 2015 to February this year, it's been a long time since our last real camping trip - April 2015 with the van and September 2014 with tent/stretchers etc. Some gear had been with us during our transit period but other stuff had been in storage since late 2015.  (We relocated from Victoria to Queensland in February and are still sorting/organising various belongings.  Our camping gear is yet to be rounded up and housed in one spot).

We drove through some beautiful countryside en route to our planned campsite.  It was still light when we arrived, so we set up stretchers and 4WD mats on the floor area of the camper trailer.  (There was not much free space and Vaughan was initially stunned when I mentioned doing my normal stretches cos he thought I was going to try to do them inside the trailer)!

I'd planned a simple meal, which was just as well because the facilities were not quite what we expected.  The information we read referred to wood BBQs, which was incorrect.  Some improvisation was necessary to balance our Cobb Cooker hotplate on a few rocks.  (The cookers and our maxi BBQ had been left at home along with the folding shovel, fire poker, gloves and various other handy items).

We'd bought two packs of firewood from our local servo.  The kindling was nicely sized but the larger wood pieces were far too big to be really useful - especially when dealing with the small area beneath the Cobb Cooker plate.  Anyway, our sausages were well-cooked and not as smoked as we expected!

I made a packet pasta dish in a larger billy and fried onions in the smaller one.  We lit a second small fire adjacent the BBQ plate, to accommodate the two billies. The pasta took longer than everything else, so was served as a second course after we'd eaten sausages and salad.

We dined listening to many frogs singing and the repeated call of a distant Southern Boobook owl.  Vaughan was keen to toast marshmallows for dessert.  Fortunately I had remembered those and a couple of toasting forks.

I did my stretches beside the fire, gazing up at the stars.  It was quite pleasant, though I was not sorry to retire to the greater warmth of my bed in the camper trailer.  Bandit was less impressed at having to scoot over for me!

It's not our plan to have everyone bunked in together for long stays.  We'll set up our small touring tent if camping longer than one night at a site.  Erin has been thinking of buying a swag and it may be she opts to use that instead.  Her current stretcher is quite large (pic in the link) but we have others available for her to use that would better fit the small floorspace for overnight stops.
Posted by Happy Hamby Campers at 22:32 No comments: 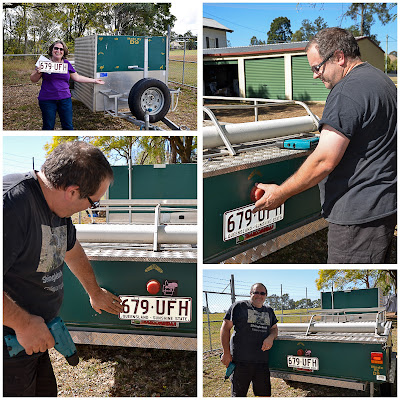 We bought our camper trailer unregistered.

Although it had previously been registered, the former owner had made modifications that substantially increased the tare (unladen) weight.

That heavier weight meant we could only add around 70kg in total of water, gear, clothes etc - while still remaining within the legal range for a single-axle 750kg (fully loaded) trailer.  In effect, if we put in the mattress and only partially filled the water tank we would be over-loaded.  The previous owner had started the process of having the trailer approved for registration in a higher weight category but hadn't continued due to a death in the family.

We thought everything seemed fairly straight-forward - but we were wrong!  What a saga!  Nick and I both researched.  We received various conflicting advice and I was beginning to think we might never camp anyway other than in our back yard!

At some stage, the former owner called in to drop off some spare keys.  He gave us the name of a mechanic who had previously seen the trailer.  When that lovely guy attended, he looked at all our paperwork and asked what we were doing?!  He explained the flaws in our interpretation of the process - and advised how we should properly proceed.  He was definitely a man with a plan!

On his advice I arranged for another wonderful man to inspect the trailer and provide modification certification, which included attaching the necessary "mod plate" to our trailer.  When that was done, my first adviser returned to complete a roadworthy/safety inspection and then I was ready to present all my certificates to the motor registry.

When I was standing at the service counter waiting for all the relevant data to be processed, the registry computer stalled.  I half-expected the operator to say "computer says no"!  Fortunately there wasn't an issue and I was soon handing over the registration fee.

Given all the angst I was a bit stunned when I actually exited the motor registry with my brand-new number plate, which proves the camper trailer now has a legal ATM of 1200kg! Hooray!
Posted by Happy Hamby Campers at 21:25 No comments: 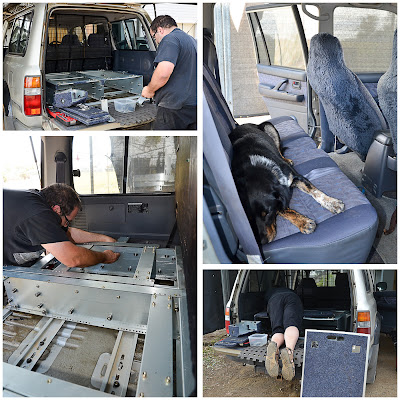 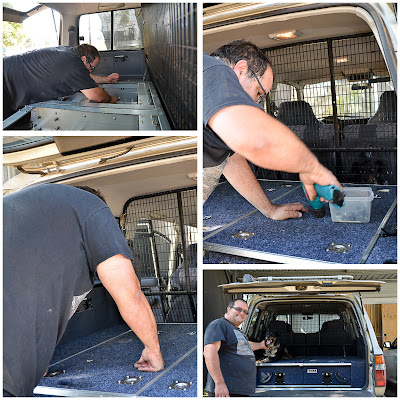 Nick removed the original Elmer's rear drawers in readiness for his insurance assessment/repair.

Sadly, that work didn't proceed and we hesitated to fit the drawers into Elmer the Gold, till we had acquired various furniture pieces (as part of setting up our new QLD home).

The drawers had originally been fitted close to Fathers Day in 2015 - and have now been re-fitted, almost two years later. It's Nick's third install of the drawers.  This one went super smoothly, partly due to practice but also because the cargo barrier was out.

Bandit saw the activity as a sign of a possible outing. When that didn't happen, he settled for dozing on the back seat, semi-supervising Nick.
Posted by Happy Hamby Campers at 14:27 No comments: