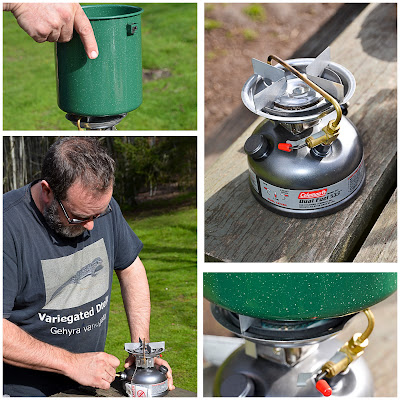 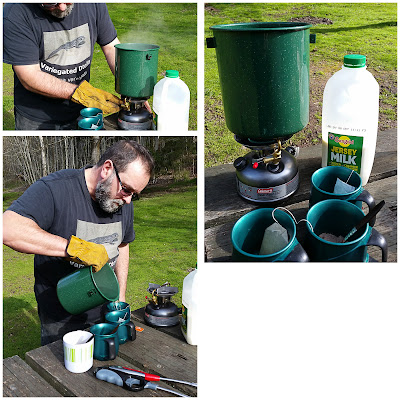 At some stage since our move to caravan living, we decided it was easier to take our dual fuel stove with us to boil a kettle/billy, rather than filling our thermoses before departure.

In more recent times our original dual fuel stove hasn't been working as well as it used to.  (It was purchased in very early 2009, so has done good work over the years).

I wasn't prepared to retire the original but thought we could use a small version for our day-trips, while we decided how to re-tune the larger stove.

Although Nick and Erin had tested the new stove while Vaughan and I were in WA, I was keen to see it in action once home again.

We found ourselves at Mount Franklin the day after Vaughan and I returned to Victoria.  We had a picnic lunch followed by a round of hot beverages, before setting off for a walk up the crater.  Tanya rang when we were at the top, to announce that she and Brett had eloped!  We chatted for a while before heading back down to Elmer - and decided another round of drinks was in order.

I'm not quite sure what went wrong but the billy slipped off the stove and spilled boiling water across the table.  Some splashed on Erin but as Vaughan was closest, it wet his leg.  He stripped off his track-pants and Nick applied some cold water but Vaughan then said he was ok and pulled his pants back up.  There was a bit of drama before his pants were removed and more water was applied - due to Vaughan being anti even semi-nakedness anywhere, let alone a public space!

We probably tipped 12-plus litres of very cold water over the knee, with many trips back to the tank to refill our bottles.  The local hospital was 15 mins away so after ringing, we drove there.  They checked Vaughan's leg and said we'd done the right thing.  (They advised water should be tepid not cold but we used what was on-site). A gel infused pad was applied and held in place with a bandage - which did very good work overnight (and the skin healed fully after a few days).
Posted by Happy Hamby Campers at 18:46 No comments:

Email ThisBlogThis!Share to TwitterShare to FacebookShare to Pinterest
Labels: September 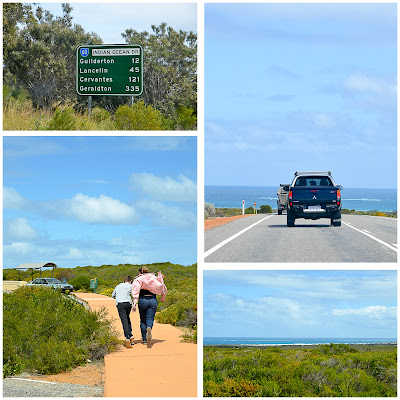 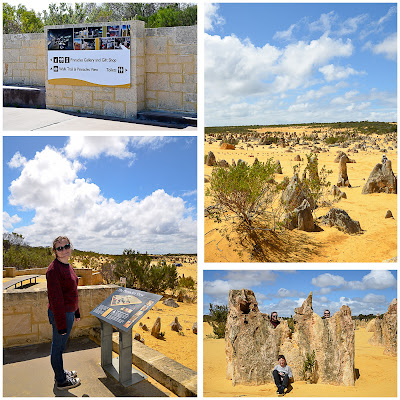 Vaughan and I had some wonderful adventures with Nissa - and visiting The Pinnacles was a definite highlight!

We stayed in Freemantle, so the drive up to The Pinnacles was just under 250 km.

Nissa drove a lot of the way, which meant I could take pics and watch for wildflowers.  I was really impressed by the huge areas of grass trees - and of course, driving along the Indian Ocean.  Stunning!

The Pinnacles were awesome! I'm so glad we saw them - just magic!

Nissa and I spent some time in the Discovery Centre before re-joining Vaughan (who had wandered off to a viewing platform).

It is possible to go bush walking in the area but we chose to drive the one-way track, stopping off at various bays to walk short distances and view the formations more closely (some of which are close to five metres high)!  We would have stayed longer but had packed a sausage sizzle lunch, so needed to head further afield to find a BBQ as we were all very much in need of sustenance!
Posted by Happy Hamby Campers at 20:50 No comments:

Email ThisBlogThis!Share to TwitterShare to FacebookShare to Pinterest
Labels: September, The Pinnacles 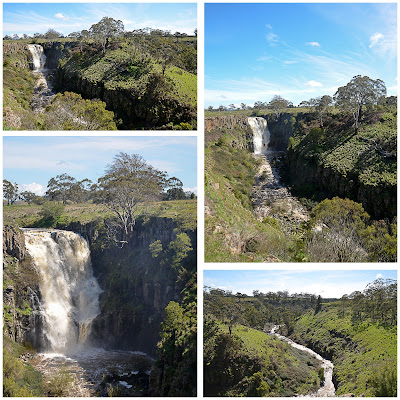 We visited Lal Lal Falls in March but there was no water.

Given all the recent rain and flooding, I wanted to see the falls in action, so we headed over for a quick visit en route to the airport (where Vaughan and I were taking a WA flight to visit Nissa)!

Wow!  So much water - and so many people there to see it!  The carpark was over-flowing and more cars arrived as we strolled around.  There were lots of visitors enjoying the wonderful sight - and I'm very glad we made a detour to join them!  You can view some drone footage (not ours!) of the falls here, taken about a month prior to our visit.
Posted by Happy Hamby Campers at 20:00 No comments: