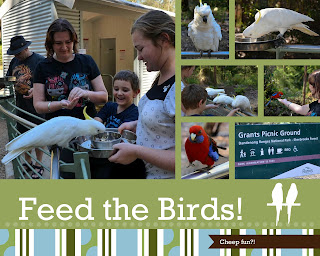 After strolling through the William Ricketts Sanctuary, we spent some time chatting to the Ranger at the entry-point information centre.

She gave us a map and recommended various other attractions in the area.  There were many that appealed but "wild bird feeding" at Grants Picnic Ground was the activity that was unamiously selected for the afternoon.  The map was basic and our GPS was keen for us to take the most direct route, so we found ourselves heading down a steep dirt-road at one stage - but arrived safely, for an afternoon tea picnic beneath beautiful, tall gum trees.

We dallied a little, so by the stage we purchased our seed tickets ($4 per tray) from the nearby cafe, there was only 10 minutes left of feeding time.  Fortunately there were still some feathered friends keen for tasty morsels - although both Nissa and Vaughan were bitten by over-eager cockatoos!  Nissa's "attacker" drew blood but the cafe attendant donated a band-aid to the cause and all was well.

It seems the birds are more active earlier in the day, with the best experience to be had between 9:00 and 11:00am, so there are plans for a morning visit next time we go - and there is bound to be many next times!
Posted by Happy Hamby Campers at 14:30 No comments: 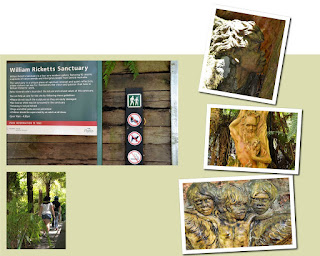 On our last visit to Mount Dandenong National Park on 30 December, we got as far as the William Ricketts Sanctuary carpark before hunger overtook us and we opted for sustenance rather than sculptures!

This time we were much better prepared, having ensured we enjoyed a lovely BBQ lunch before making our way to the "Forest of Love".  We were surprised to find there was no entry fee, so happily paid $10 to hire two MP3 players to play an audio tour.  (It is possible to download these podcasts here).

It was very pleasant wandering along the paths through the ferns.  We sat for a while in the artist's former residence to watch two short documentaries about the works, which were interesting viewing.  Our visit has prompted much discussion as to both the artistic and idealogical merit of the sculptures - easily $10 worth of entertainment!
Posted by Happy Hamby Campers at 14:30 No comments: 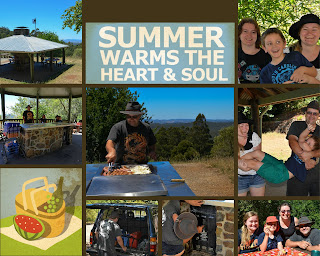 Although we often head out for picnics, we generally select our lunch venues based on what facilities are nearby when we are hungry.

However on this occasion we set out for the Dandenong National Park with a specific lunch destination in mind.  On our last visit we had discovered a "private"  BBQ pavillon with just two picnic tables nearby.  We liked it so much on that we had "a little something" (a la Pooh Bear) just because we wanted to sit at the one of the tables!

Being a weekday, it was not surprising that there was no-one else about and we were pleased to again have a choice of two tables and the whole pavillion to ourselves.  After setting everything up though, we discovered that the shiny clean BBQs didn't actually work - drat!

There was some joking about raw sauages for lunch but given that didn't appeal, Nick drove down to the larger, lower picnic area and pre-tested the (equally clean) BBQs there before we shifted camp and started again.  As much as we liked the area further up the hill, our new location offered even better views and we now had a choice of four tables and several BBQs - though the setup was the reverse of the smaller location in that the tables were under cover and the cooking occurred in the open.

After lunch I read a nearby information board and learned that the large BBQ shelter was built upon the site of what had once been a house on the Kalorama property.  Seemingly some of the original fruit trees are still growing on the reserve, though we didn't see them.
Posted by Happy Hamby Campers at 01:00 No comments: 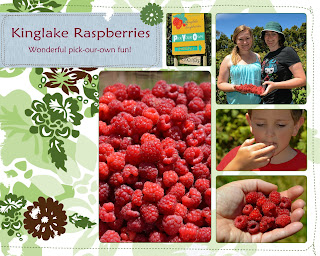 When I was researching activities in and around Melbourne, I found an article about Kinglake Raspberries - where visitors can pick their own fruit.

(I've spent a lot of time in New Zealand, staying with a very dear friend and her grandparents most December/January holidays during high school - and have returned a number of times since. Raspberry picking/eating has always been high on my wishlist during those visits, hence I was eagerly anticipating a trip to a raspberry farm)! 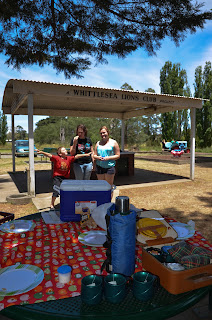 Nick was working but the rest of my troupe were also keen for the adventure, so we packed up a picnic and headed North-ish.  There was some lovely countryside along the way.  We called in at the Whittlesea Visitor Information Centre and picked up some brochures of the surrounding attractions.

The volunteer was a bit vague about the area's highlights but it may have been that her attention was elsewhere, as our arrival had interrupted her reading of "Fifty Shades of Grey"!

We thoroughly enjoyed our picnic lunch in the nearby Lions Club Park - eating pies, sausage rolls, danishes and meringues from one of the town bakeries.  After lunch we drove on another 20km to Kinglake Raspberries and spent some lovely time wandering along the bushes and plucking the beautiful fruit.  We collected just over 1kg and paid $17.90 - an absolute bargain considering the same amount would have cost at least $48 at supermarket prices (and a trip to the local Woolies/Coles would not have been anywhere near as much fun)!

I have to brag a little as I've been rather wimpish since our Melbourne arrival, choosing to travel by tram rather than drive on the roads with them - and I drove all the way out to Kinglake and back (120km round trip) without GPS or incident!   To be fair, Erin navigated on the way out using a printout from Google Maps but I drove home without any assistance, so am very proud of my efforts!
Posted by Happy Hamby Campers at 17:00 No comments:

We didn't do much for New Year's Day in 2012.  Nissa made wonderful cinnamon scrolls and Vaughan practised his reading.  It was a perfectly pleasant, quiet day.  I distinctly remember 1 January, 2011 though.  We drove along the Blackgate Road where we spotted emu bathing in mud puddles on the track and surprised many wild goats and other wildlife.  That drive was in sharp contrast to the one we took yesterday - "graded" dirt track vs six-lane Melbourne freeway (although we drove along some lovely country roads later in the day)!

Back on New Year's Day 2011, there was no way we would've predicted that in two year's time we would be living in Melbourne - so there is definitely a sense of expectation, wondering what else 2013 might hold!
Posted by Happy Hamby Campers at 09:25 No comments: 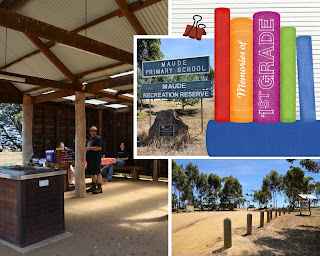 Our temporary accommodation is organised till early March but we are starting to consider where we might live permanently.

A rental property at Anakie has been advertised for several months, so we chose to drive in that direction on New Year's Day. We were still discussing Anakie's merits when we drove into the nearby Maude Recreation Reserve.  At first we thought the Maude Primary School still existed but after lunch I explored a little and found it had been decommissioned in 1989.  The local community had been active in transforming the former school grounds into a recreation reserve with great picnic/BBQ facilities - and we were very pleased of their efforts!

There was an information board detailing some of the Maude's early history, including that of the School - as well as an outline of the Reserve's creation and future plans for it's expansion.  As I walked about taking photos, a bossy Willy Wagtail followed me closely and scolded all the while!

As much as the bush location of the Anakie house appealed, we deemed it a bit far for Nick to commute - so our search continues for a suitable permanent locale ...
Posted by Happy Hamby Campers at 01:00 No comments: