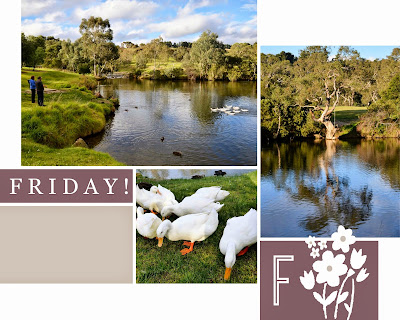 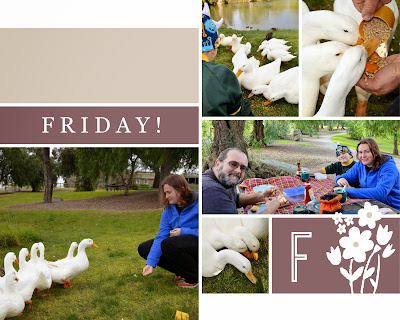 We drove to a local(ish) park after school for some end-of-week celebratory duck feeding. It was the first time we've taken these guys chook pellets and as you can see, they were super-keen scoffers! There was much giggling as we watched them all jostling for food.

I'd packed a quick afternoon tea picnic for the rest of us.

We sat for a while, looking over the river - sipping our cups of tea/coffee and munching sausage rolls (reheated at home and kept hot in the thermal cooker, during transit).


While we were chatting, Erin told us that the action of ducks filtering water through their beaks is called sluzzeling.  Betcha didn't know that?!
Posted by Happy Hamby Campers at 18:05 No comments: 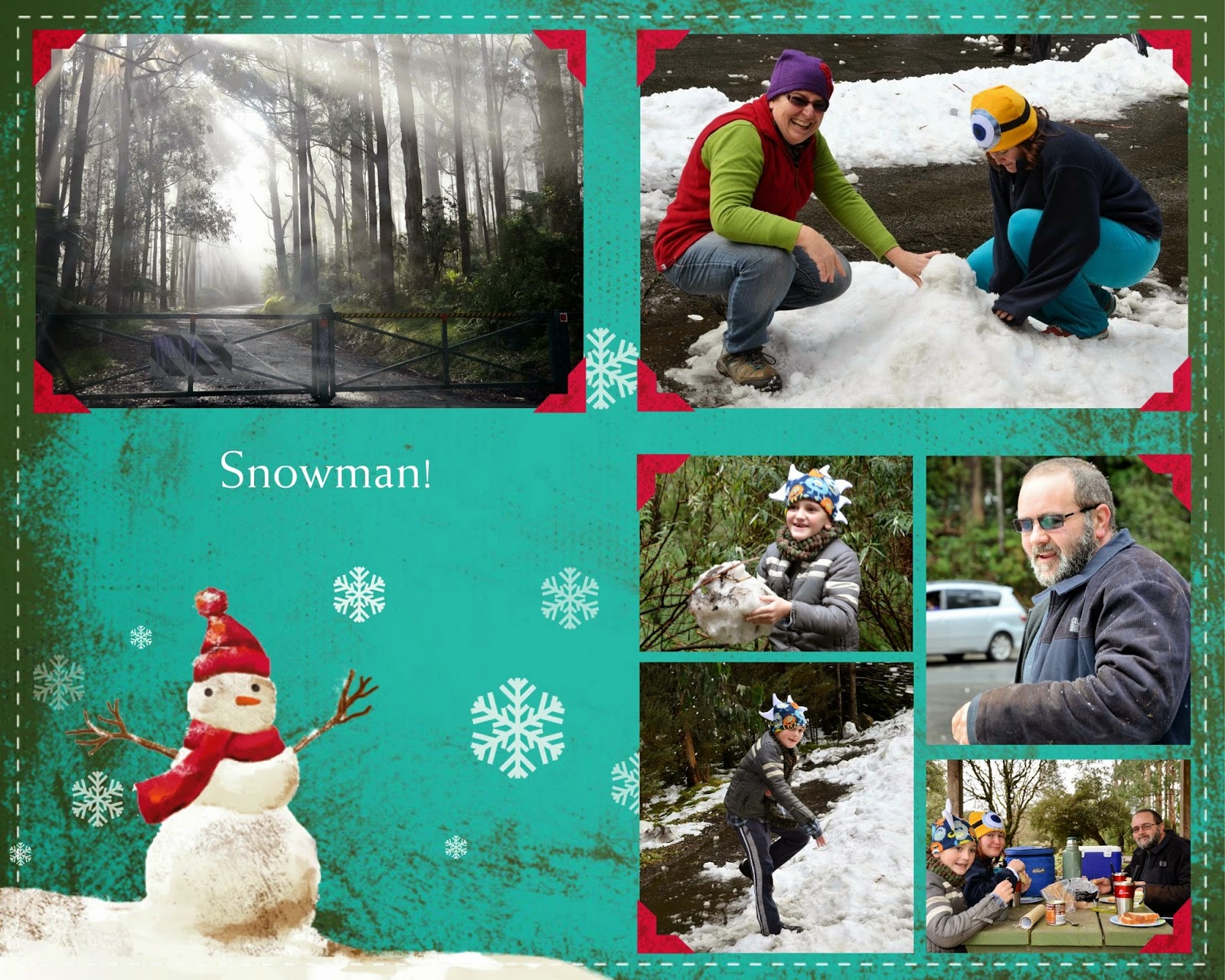 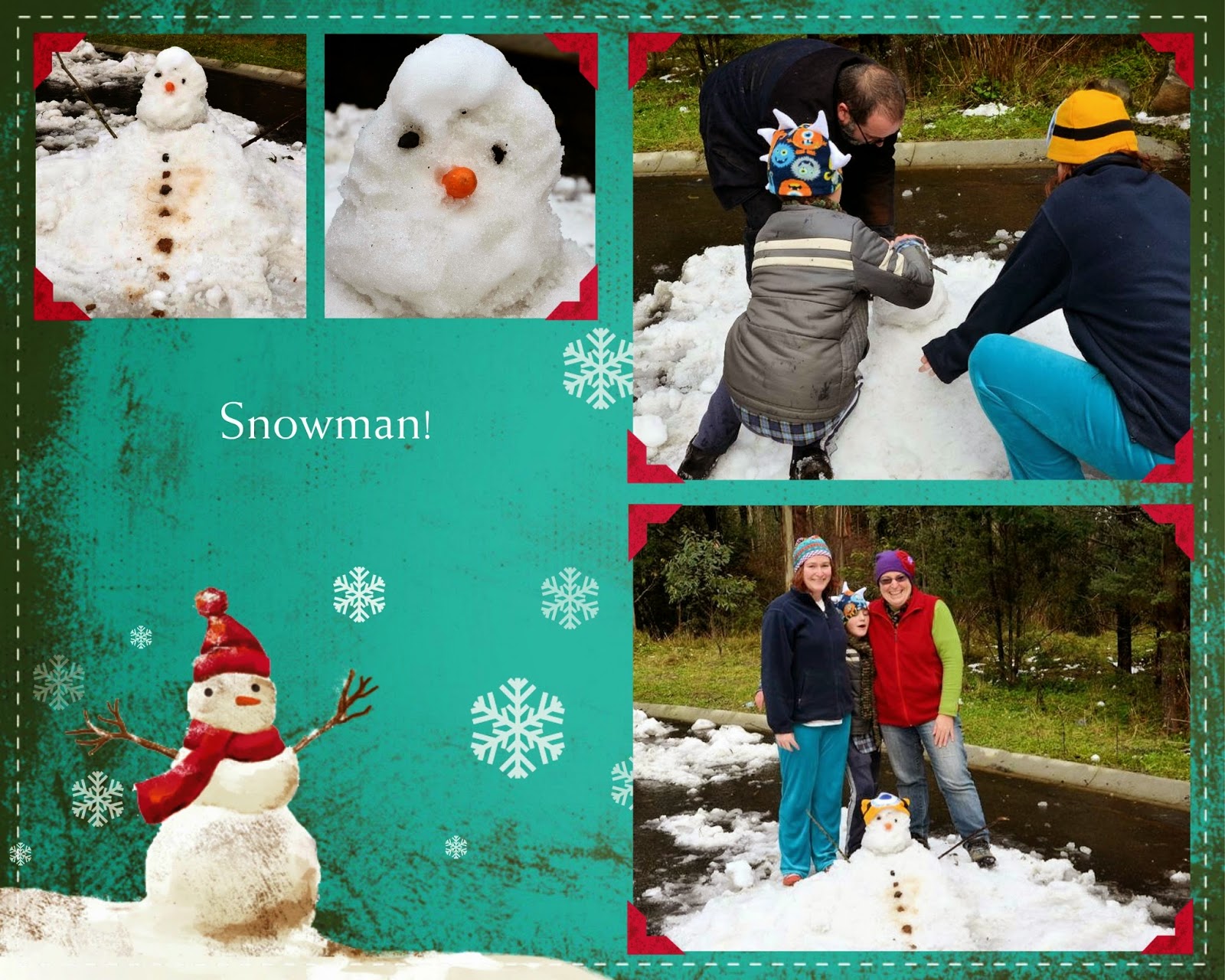 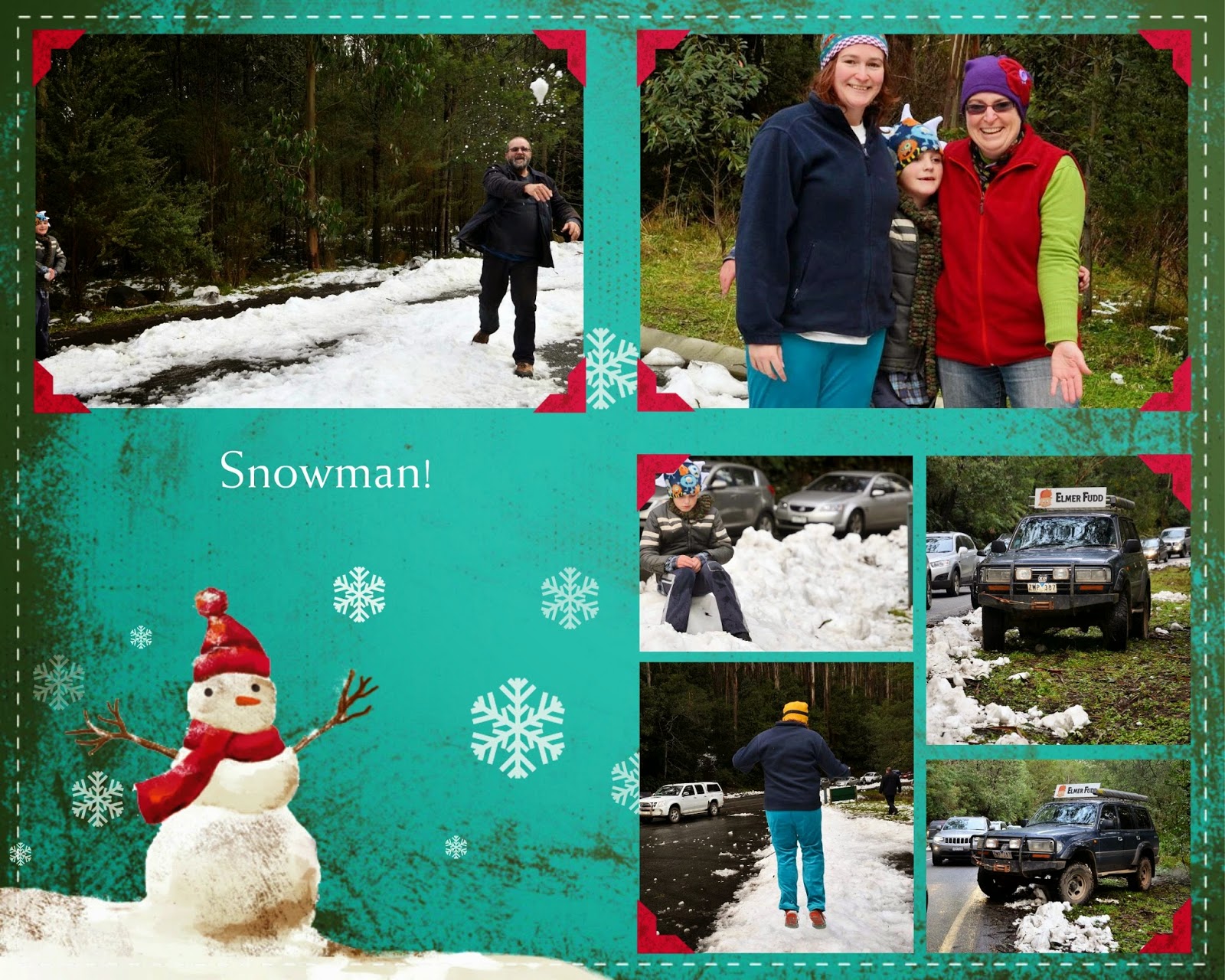 We hadn't set out particularly to picnic at Powelltown, it was just where we ended up at lunch time. Although Nick was non-committal when responding to Vaughan's repeated questions about our destination, we were heading for Mt Donna Buang (or Boing as it was often mis-pronounced)!

The GPS gave two options when we left home. After driving for around an hour, our choice led through beautiful forest - to a road closed for the snow season! For some reason, we assumed that road was the only access point so continued down into a valley and then improvised a new route from there.

After lunch, we turned back toward home but detoured through Warburton, where we spotted signs advising toboggans were available on Mt Donna Buang!

We set off again, winding our way upward and exclaiming over small chunks of snow by the roadside - as well as some cars heading downhill with small snowmen on their bonnets!  It wasn't far past the rainforest gallery carpark that a line of cars developed, all crawling up the hill.  Vaughan and I got out so he could touch the snow and throw balls of it into the bush!  Nick drove a little further, before parking Elmer beside the road and we all walked along, past the mostly standstill line of cars.

There was another carpark a bit further up the road - with a lot more snow.  Officials were talking to drivers and there were signs advising the summit was a further 3km from that point, with a two-hour delay before getting there.

We opted to play in the snow available at the carpark (as did quite a few other families).  Erin was keen to make a snowman and while he wasn't the most traditional of shapes, we found a discarded carrot for his nose to lend some authenticity!  Although we'd wanted to mount a small snowman on Elmer's bonnet, no-one was keen to attempt carrying our creation (or his head) back down-hill!

Understandably, Vaughan wanted to stay longer and praps we'll do that on another occasion, now that we know how to the get there!
Posted by Happy Hamby Campers at 23:00 No comments: 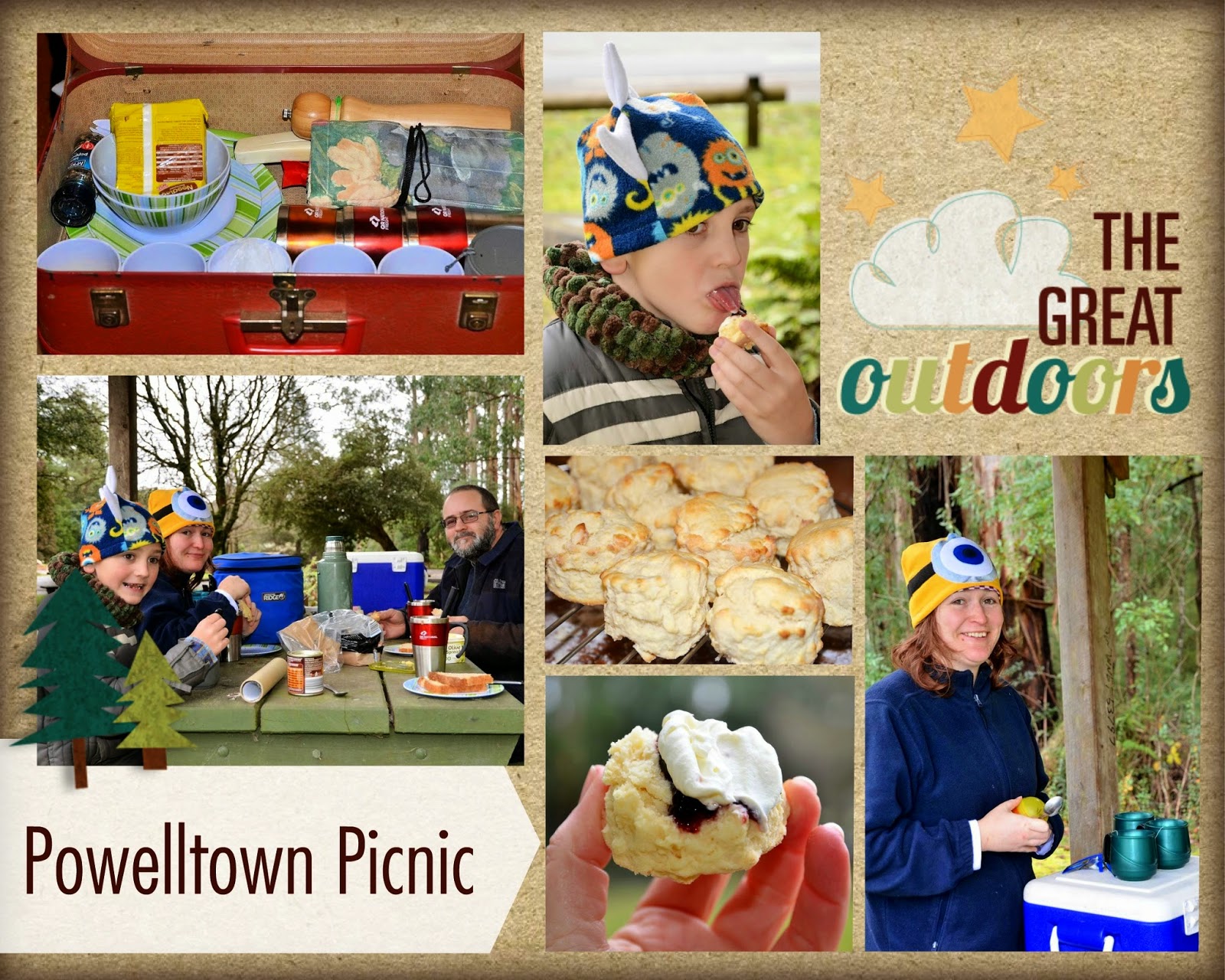 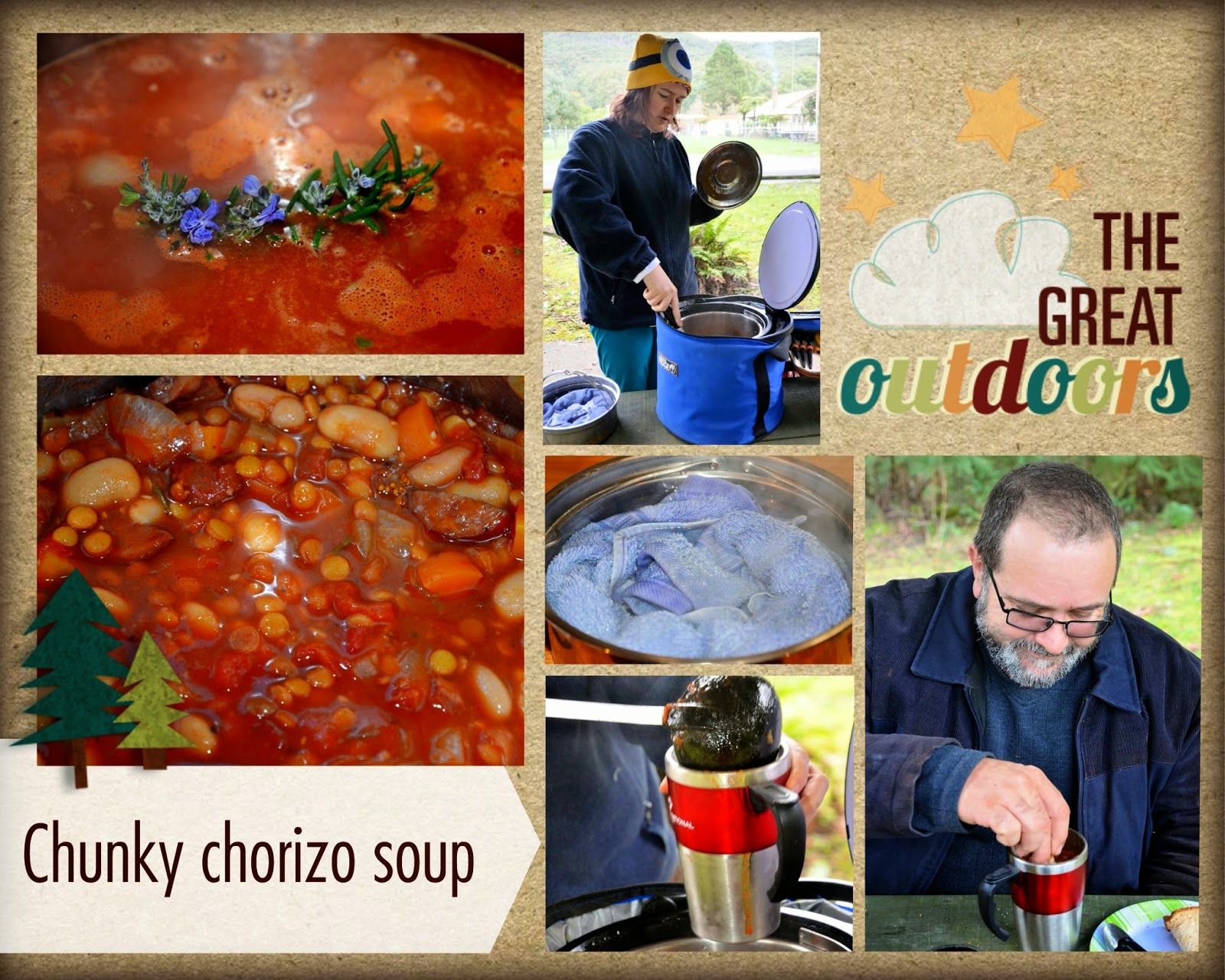 We'd decided on a day's outing as an early celebration of Nick's birthday, so I packed a picnic early this morning.

(As you can see, the red suitcase is yet to be made over - and I managed to leave the apple tablecloth at home, sadly)!

As much as I would have liked to use my new lizard bag and wide-mouthed thermoses, I hadn't pre-made any soup.

Plan B was to thermal-cook soup en route, which worked out very well - using the slosh-proof method I had developed last year (this time using a rolled hand towel sitting in the top pot of boiling water).

I made this recipe with a few adaptions - an extra carrot in lieu of celery, a tin each of butter and cannellini beans as well as a small amount of mixed herbs.  I'd used the same recipe previously (without additions or substitutions) but had simmered it on the stove-top and it condensed nicely.  There is no steam release during thermal cooking, so the extra beans thickened the soup wonderfully.

Vaughan is not a fan of soup.  He had noodles instead but all enjoyed fresh home-baked scones with jam and cream - along with minion-made beverages!

We stopped for lunch at a small park in Powelltown, where there is a time capsule due to be opened in 2034-35!
Posted by Happy Hamby Campers at 22:07 No comments: 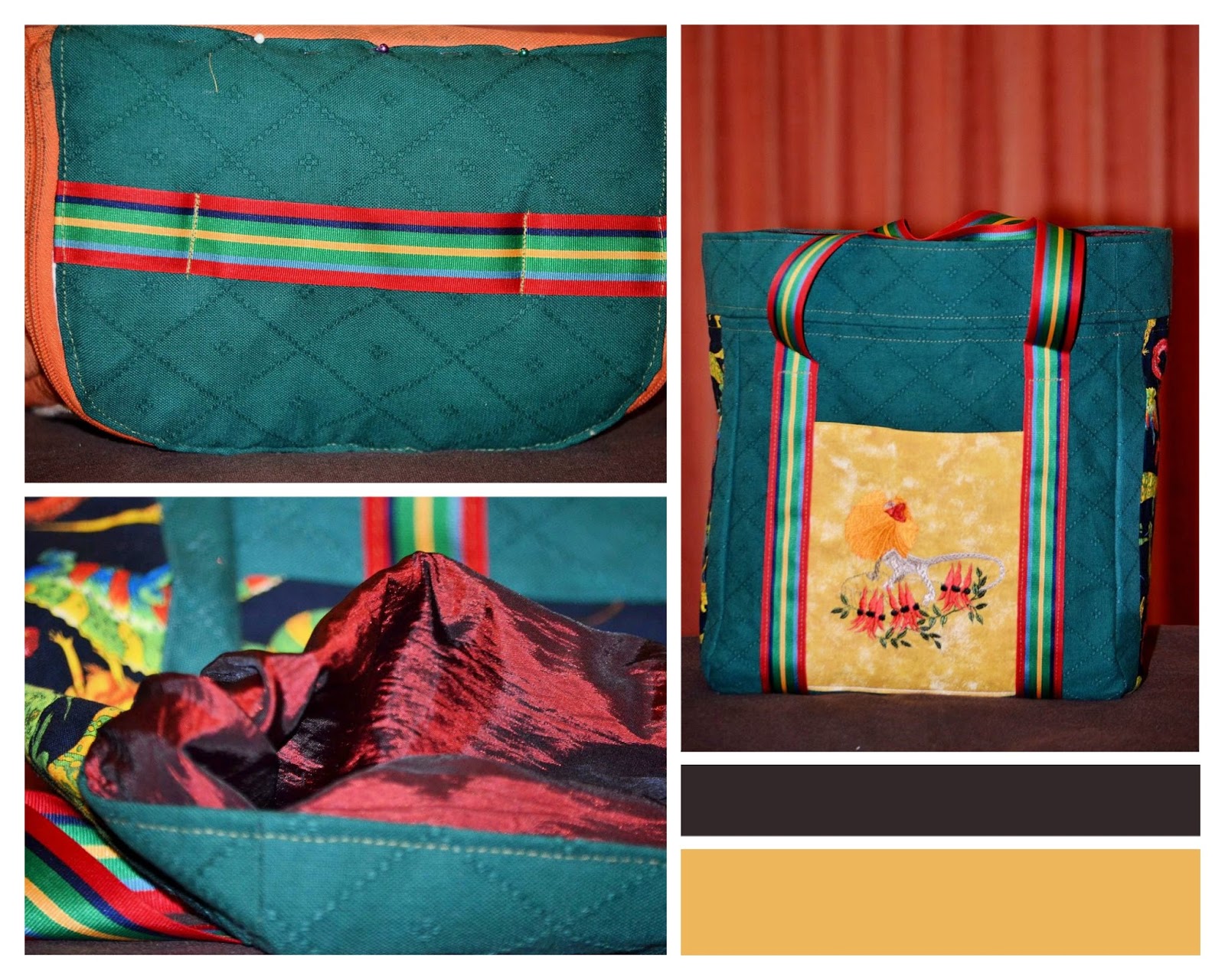 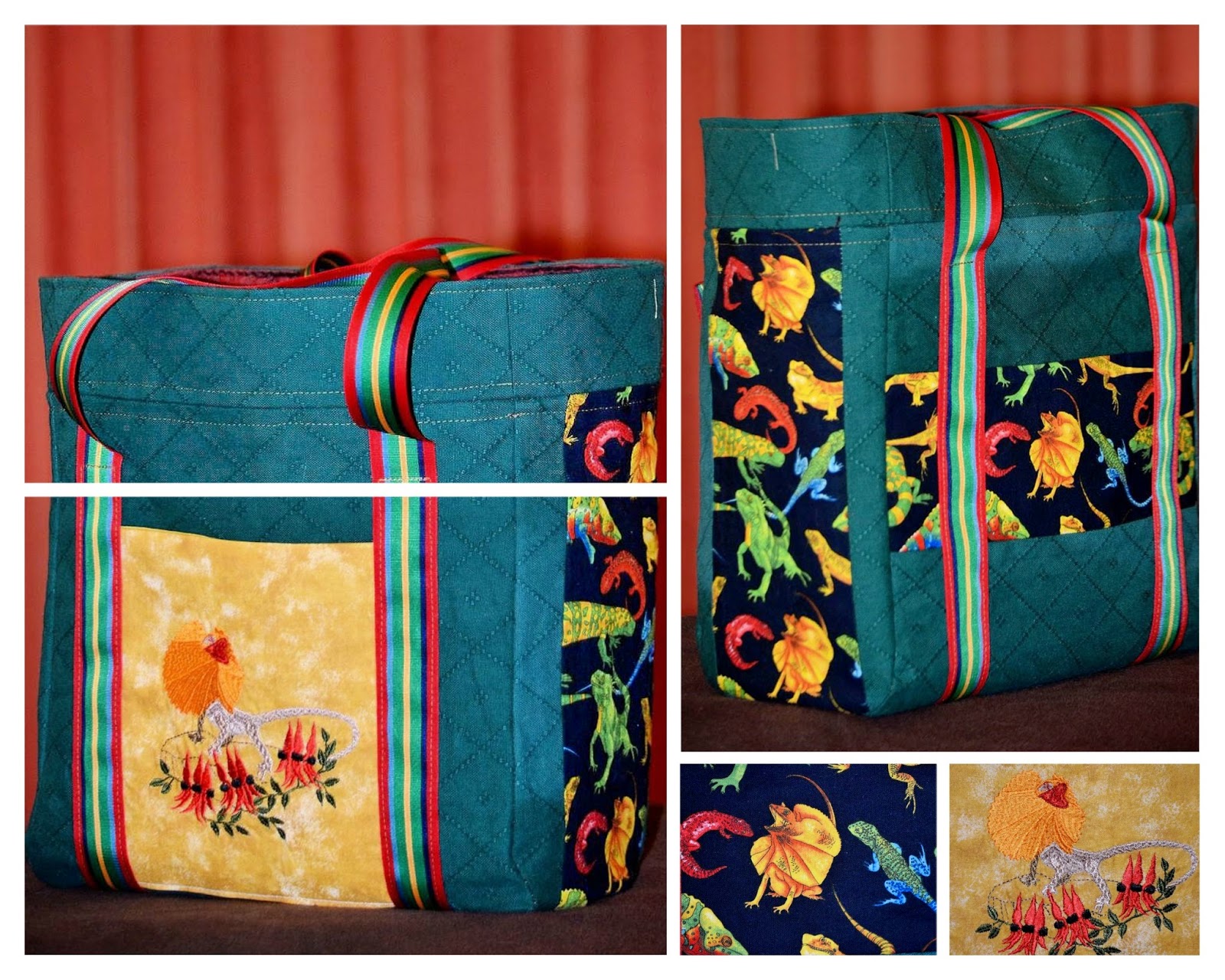 Last weekend I said I planned to make-over one of our small soft-sided esky bags. You can see the bag as it was, here. The pic is flattering, so you can't really tell how daggy the bag looked. Aesthetics aside, it's a great size for our two wide-mouth thermoses - and as my laundry soaker efforts failed, I decided to make an outer cover instead.

The stash yielded some machine embroidery test pieces my mother had donated to the cause quite some time back. I found three small pieces of lizard print too, also featuring a frilled neck lizard.

All the fabric was already on hand, I just needed to design a suitable bag/cover.  The end product isn't really what I thought I would make.  I hadn't previously made a bag with side panels and this one didn't quite go as planned.  There were various adaptions along the way - as well as unpicking, re-measuring and dark mutterings!  It's just about finished now (but for a few more stitches on the esky lid) and I'm very pleased with how it's turned out!

The top of the esky bag is still visible, so I've (almost) sewn a piece of the main green fabric on the lid and created a new handle which matches those of the bag.
Posted by Happy Hamby Campers at 21:48 No comments: 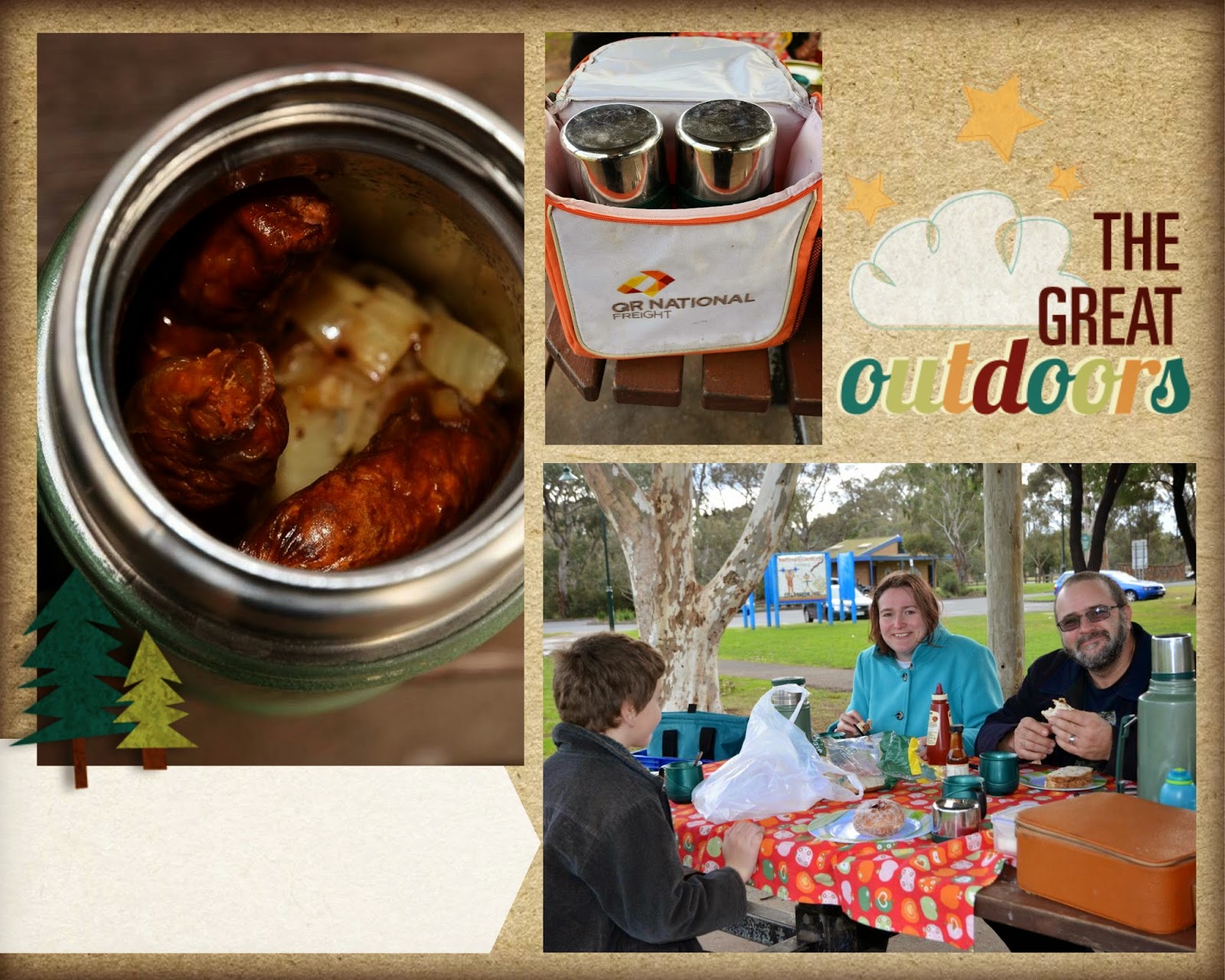 We have four Stanley thermoses - all purchased new during a clearance sale, around ten years ago.

The two larger 1.8 litre versions are used often for hot water and at least one is packed as a matter of course(with our beverage case) for most trips.


Our smaller wide-mouth food flasks don't get out and about as often.  They are more likely to be used during winter for soups and from time to time I've made thermos porridge in them.  We went out today as a school holiday finale.  I was expecting lots of people and possible difficulty finding a BBQ, so cooked our sausages and onions at home - then packed our pre-sizzled snags into thermoses.  It was mid-afternoon when we stopped for lunch.  Typically the BBQs were deserted and we could have had our pick of them!

Nick was given a small insulated bag (with corporate logo) and it is just the right size for our smaller Stanley flasks.  The extra layer of insulation is great although white wasn't a fantastic colour choice and the bag is looking pretty grotty. Yes, I'm considering giving it a make-over - stay tuned!
Posted by Happy Hamby Campers at 23:01 No comments: 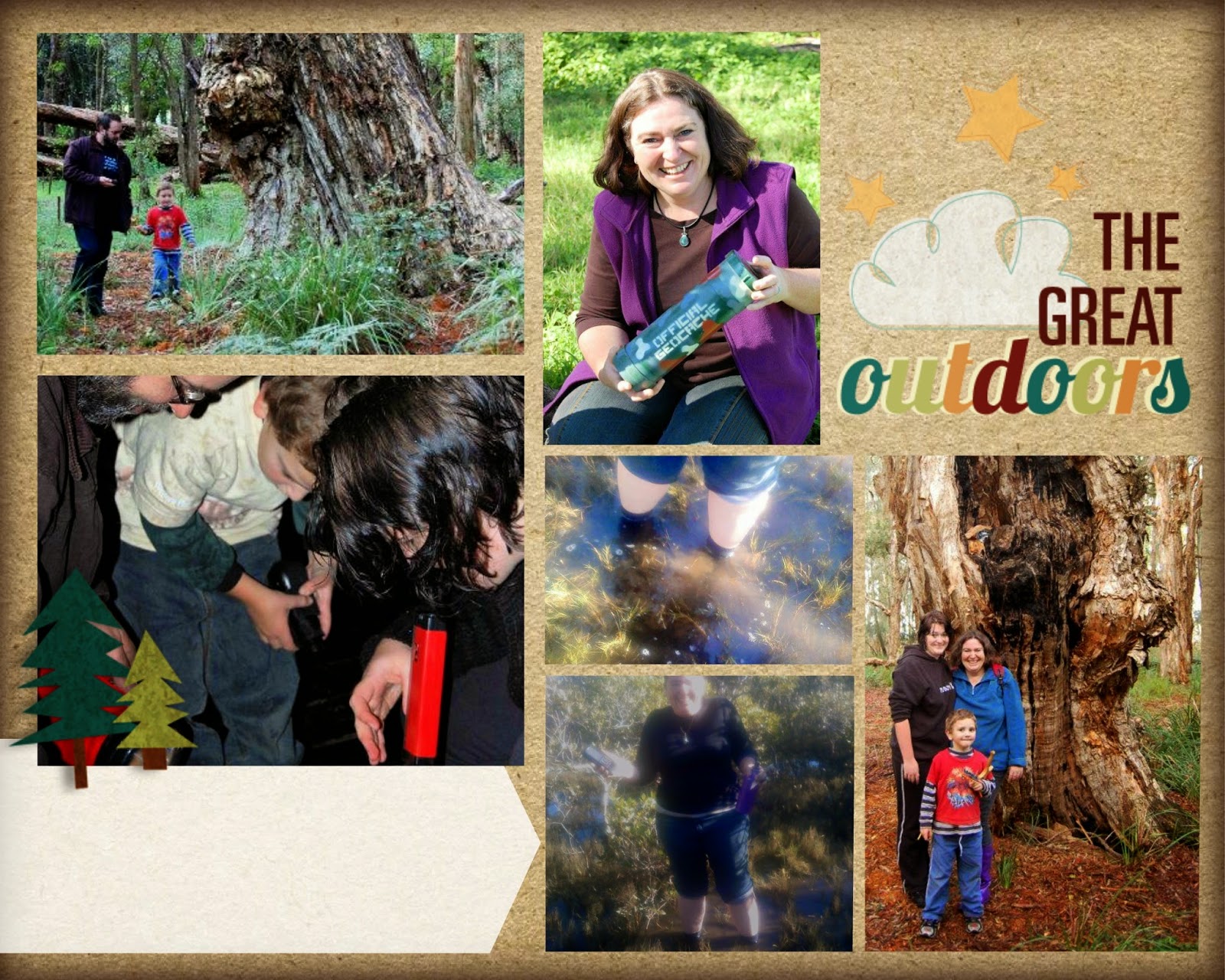 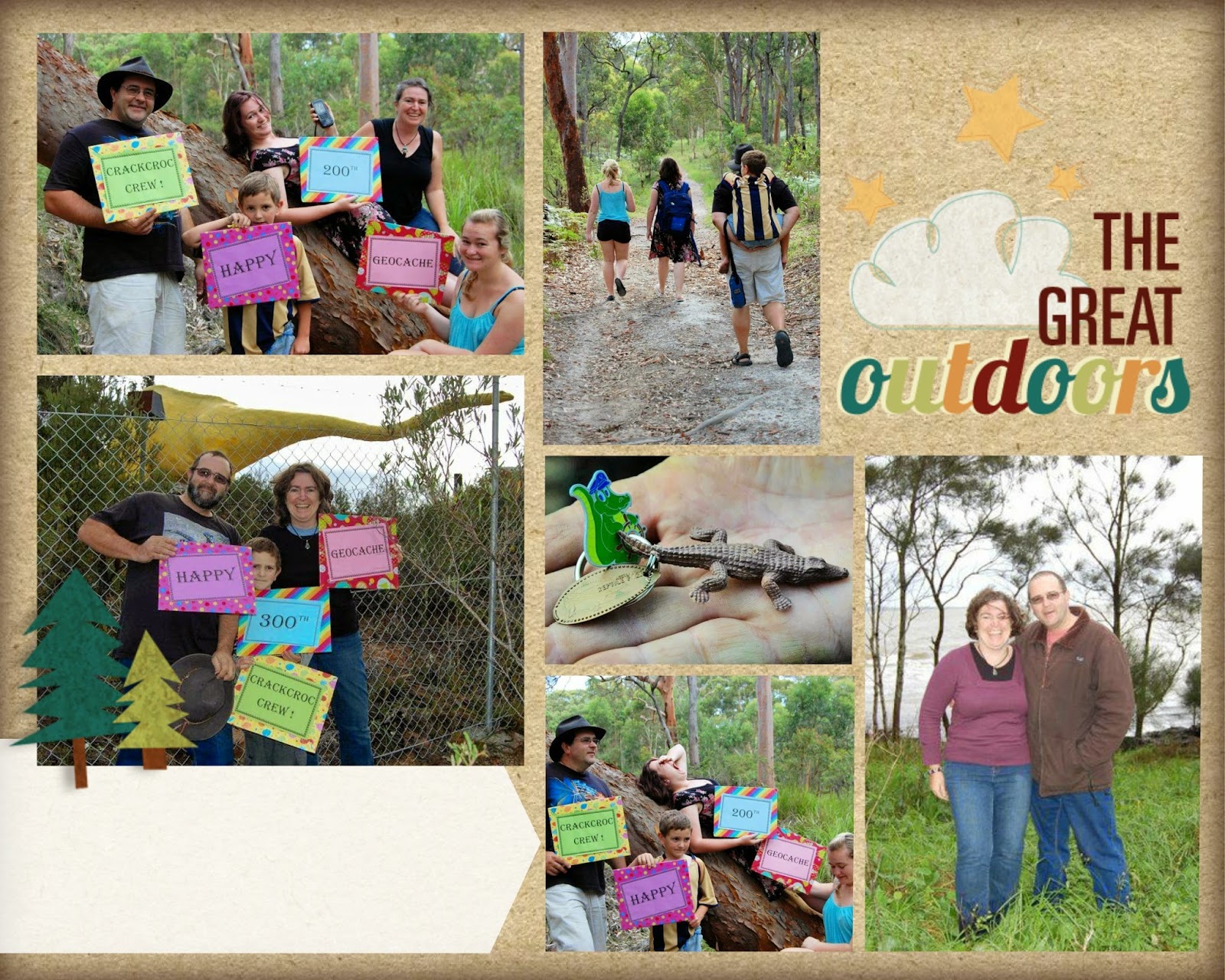 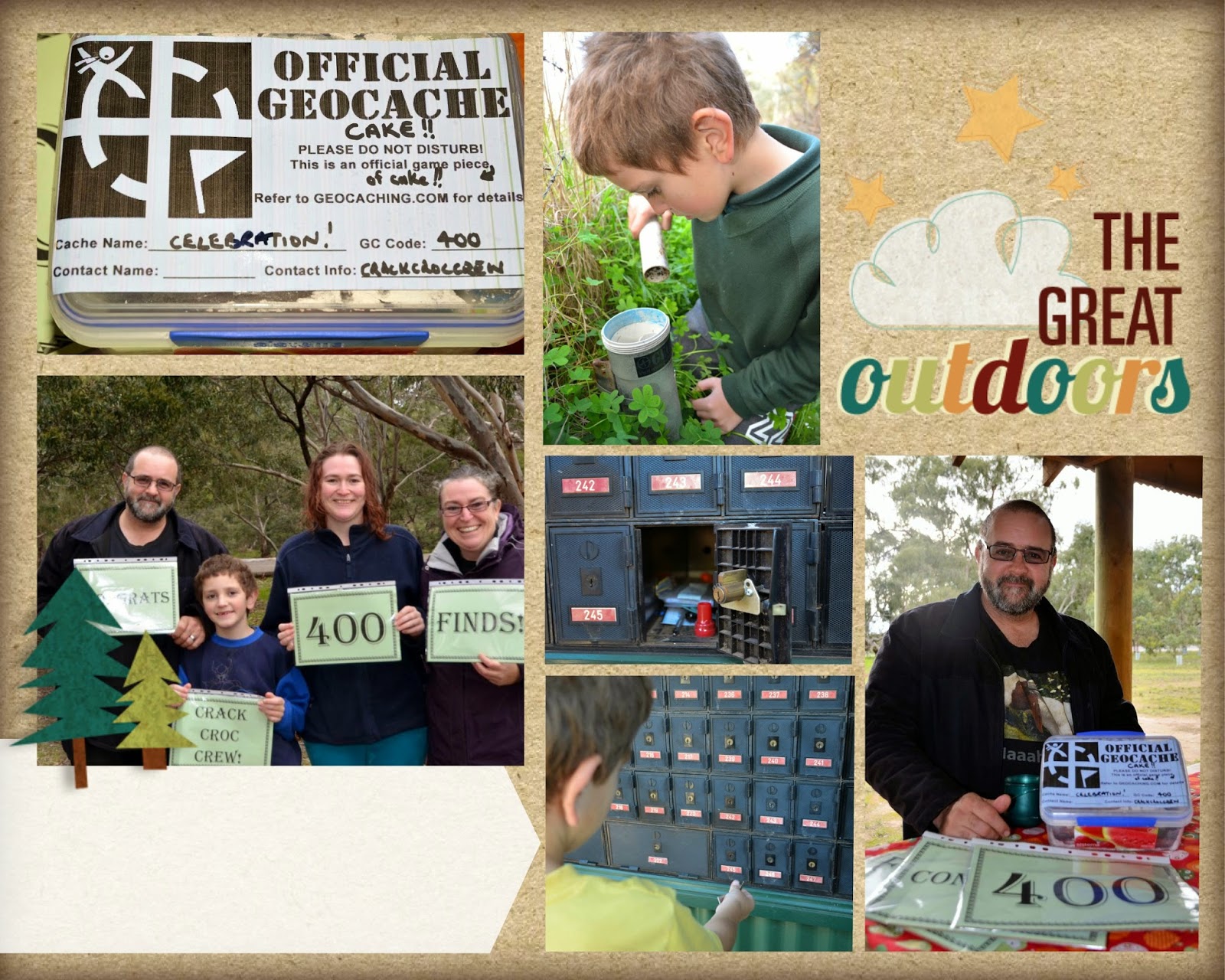 We've just passed our 4th anniversary as geocachers - yep, we started 'caching back in June 2010.

Geocaching had been suggested to me by a colleague, who was a new initiate of the game.

Once home, I urged Nick to research a "gadget" aka GPS unit and we headed out the next day to buy one.  (At that stage Nick was still muttering about the nerdiness of the sport). He and I tried for a cache on the way home.

Our efforts were spectacularly unsuccessful but hugely entertaining as we traipsed about in increasingly soggy marshland. When the water rose above our ankles, we finally admitted defeat - squelching back to the car, then heading home to dry off and re-group!

In spite of that less-than-best intro, our enthusiasm was un-dampened.  We've made many finds since.  You can read about some of our geocaching exploits here. It's been a good way of breaking the journey on long trips, introducing us to little-known spots once in a location - and just generally encouraging everyone out of the house and into the great outdoors, regardless of weather!

Today we logged our 400th find - just over a fortnight after our 4th geocaching anniversary!  Typically it began raining heavily as we signed the log-book, so we retreated to a nearby picnic area for our celebratory picnic and special home-baked rainbow cake. As you can see, there were "official" photos - four takes was all it took for Vaughan to co-operate! 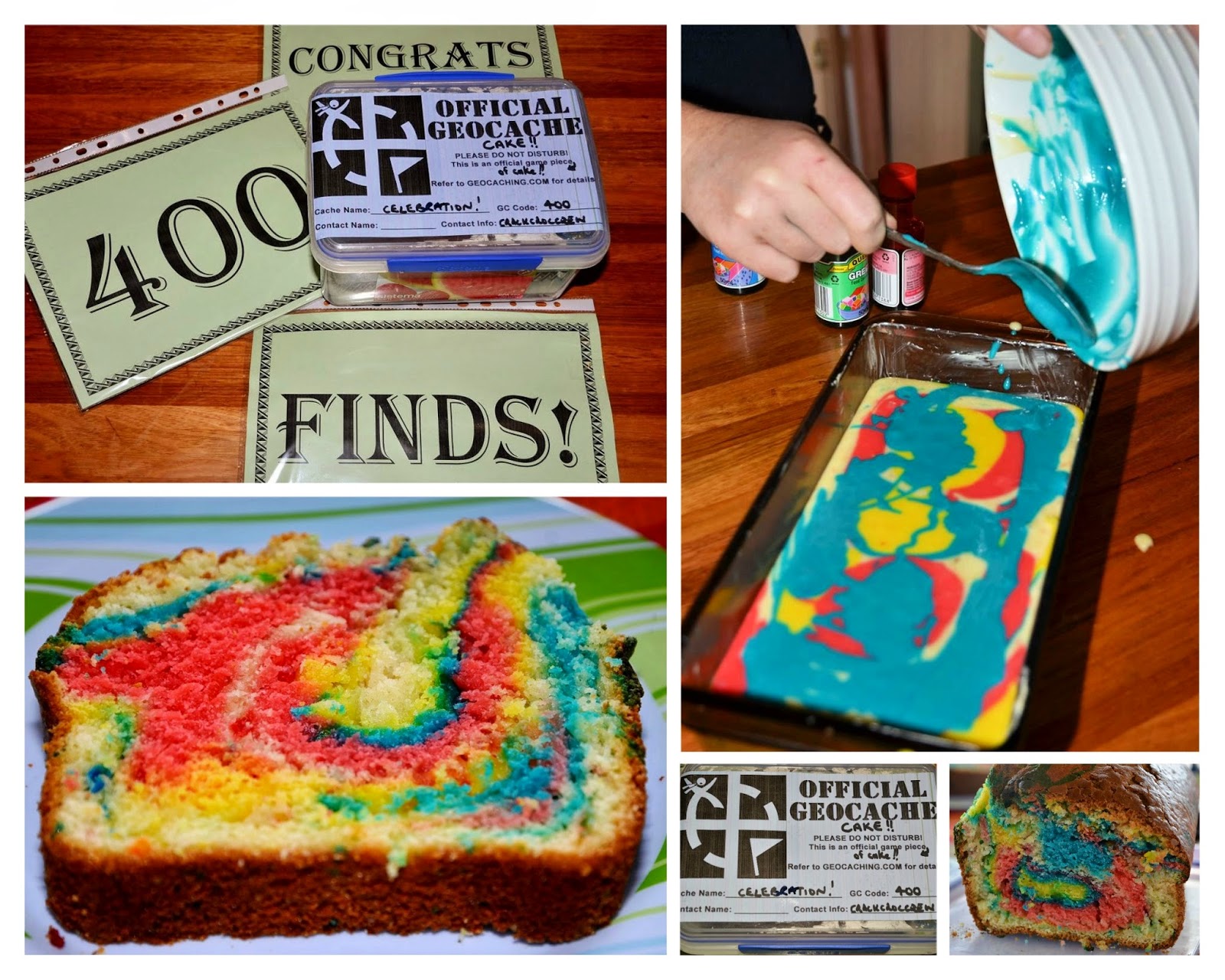 I wasn't going to include photos of our cake but it really deserves a mention, because it was so bright on such a dull day!

Erin helped colour the batter - Cookie monster blue, Elmo red and something close to Big Bird yellow!  It was super-cheerful!
Posted by Happy Hamby Campers at 17:09 No comments: