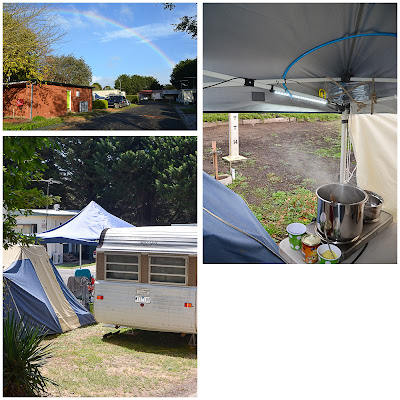 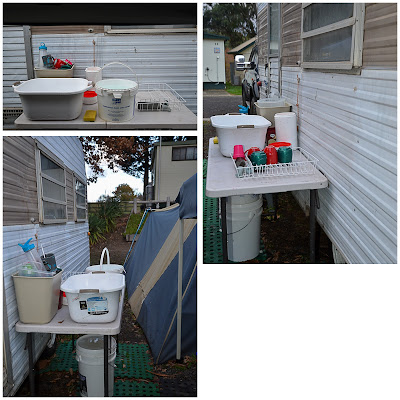 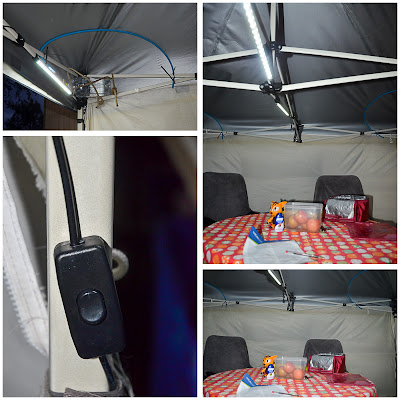 We are a family of sickies at the moment, which makes coping with our current living arrangement a bit trickier.  Although there was a rainbow and blue sky for a brief period this morning, much of the day has been cold and wet - which hasn't increased our motivation!

I spent some time outside late this afternoon, putting an easy meal into one of my thermal cookers and dealing with some washing-up.  You can see my current (hah!) plug-in hotplates in one of the pics at left.

Yep, I paid full-price for a brand-new Kmart set and they are working well.

There has been a lot of wind today, so the gazebo has stayed in it's low setting.  I can stand beneath it but don't always remember to duck under the roof struts when moving about!

I spoke of some of the difficulties of cheffing al fresco here.  These pics might give you a bit more idea of the open-air nature of my "kitchen" and "dining room".

During the past month, we've bought some neat 12-volt lights.  Nick has rigged them so we have three set-up under the gazebo - two over the table and one where I generally cook.  (The kitchen sink table is under the van's outside light).  There is another light strip inside the tent.  We even have light switches - how cool is that?!

When we initially moved into the van a bit over seven months ago, we used a couple of cheap 24-volt plug-in lights (from a car accessories retailer), to light the tent and gazebo.  Those lights have gone by the wayside so for a while we were using a torch in the tent and nothing under the gazebo.  In discussing a much better system, we decided we'd rather invest in something that would be useful for "proper camping".

We were very pleased when 4WD Supa Centre had an extra-good sale on their Camp Light Kit.  The lights run from our wonderful Thumper and everyone really appreciates being able to see properly.  (Once a week we take the Thumper for a run in Elmer to re-charge).
Posted by Happy Hamby Campers at 19:10 2 comments: 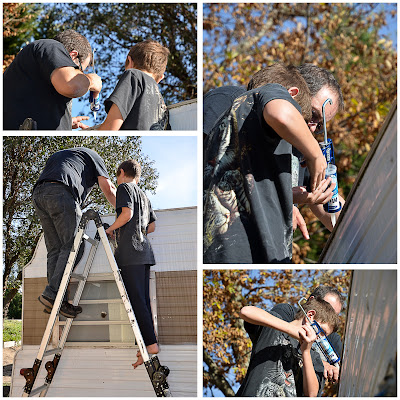 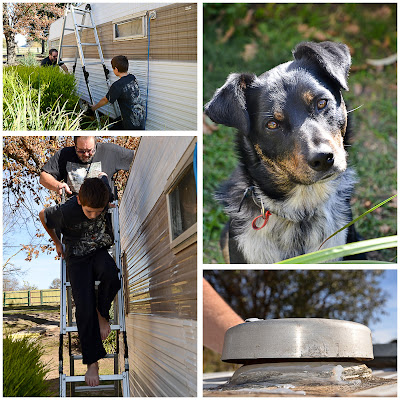 Nick bought a few simple supplies to hopefully lessen the van's various roof leaks.  We still use a tarp as part of our bed linen, so it is easy to pull over the bedding when we hear heavy rain during the night.

The leaks over our bed seem only to occur when rain is particularly heavy and consistent.

Although Nick re-sealed one roof edge at the beginning of last year, the other edge remained untreated - and the leaks occur on that side, as well as from the roof hatch and kitchen vent pipe.

We currently live in our van, on a site in a caravan park.  We aren't really able to undertake a full-scale roof repair.

Nick borrowed a ladder, so he and Vaughan could apply sealant to the roof edge, the kitchen vent and roof hatch. It seems the vent may have had a leaking issue for a long time as there was quite a lot of old sealant around it.  I asked if there was any obvious sign of water entry above our bed but seemingly there wasn't.  We'll just have to wait for heavy rain and hope the latest sealing efforts are successful.  (I'm not giving up my drip-dry doona cover/tarp just yet though)!
Posted by Happy Hamby Campers at 10:38 No comments:

Blinded by my brilliance?! 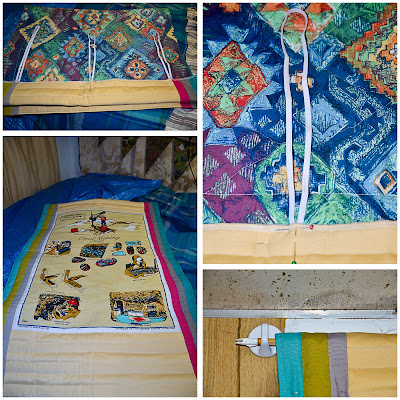 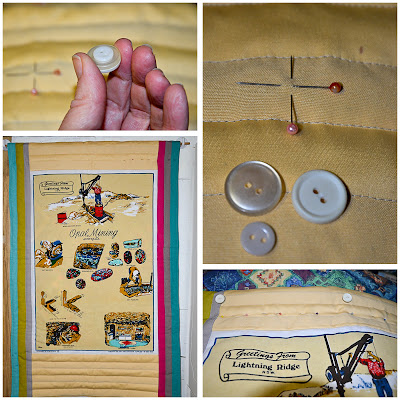 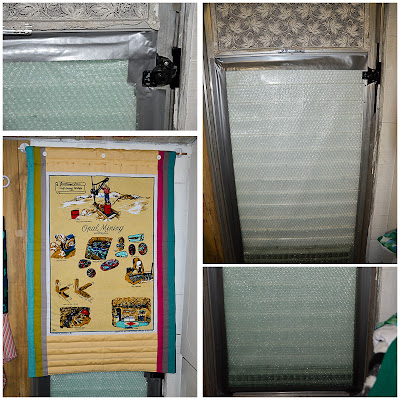 At the time of fitting a lace panel to the door window, I spoke of an almost-finished blind I'd made soon after making the curtains.

Given our current insulation project, we bought some plastic hooks while at Bunnings yesterday.  Nick mounted them above the door last night, to give them the recommended 12 hours before use.

I worked on the blind today.  It had started life as a never-used tea-towel bought at an op-shop for $2.00.  (I'm sure you can see the appeal given our Lightning Ridge and many great Yowah adventures).

The background was very close in colour to the gold curtains, so I used that and some of Erin's curtain fabric to frame around the tea-towel.  It was backed with some pre-quilted fabric (left-over from our drum bags).

I'd first thought to sew some ribbon into the header of the blind, so that it could be rolled up when not in use.  As I rummaged in my box of sewing supplies today, I had another idea.

Rather than have to tie several pairs of ribbon each morning, I decided to use elastic loops instead.  I had a small selection of buttons and thought to sew them in stacks of three - to create a better hold for the elastic (when in use).  It's been cold and wet today, not conducive to sewing under the gazebo.  I've pinned the blind, ready for it's final row of stitching.  Fingers crossed I'll be able to achieve that very soon!

In the meantime, the blind is hanging in place.  While I was doing that, I realised how cold the door was.  I was already aware of how much draught was enabled by the bottom door vent - cos I lay on the floor each night to do my back stretches.

Prior to our Bunnings expedition, I bought two rolls of bubble-wrap as I thought they might be useful for insulating the windows.  The rolls were still intact and I opened one today.  I used two layers of bubble-wrap on the door today, each taped individually.  The metal of the door is far less cold and I've covered the bottom vent also.  (There is still plenty of bubble-wrap left and if necessary I could add another layer, just from the remainder of the first roll).  I'm so impressed with how much difference this simple measure has made!
Posted by Happy Hamby Campers at 20:52 2 comments: 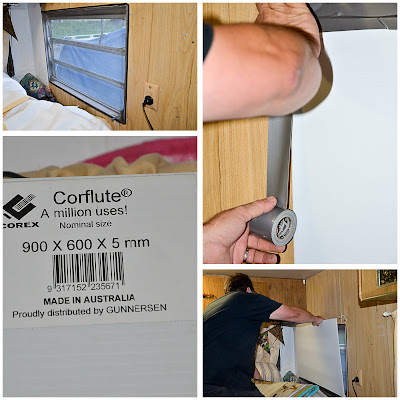 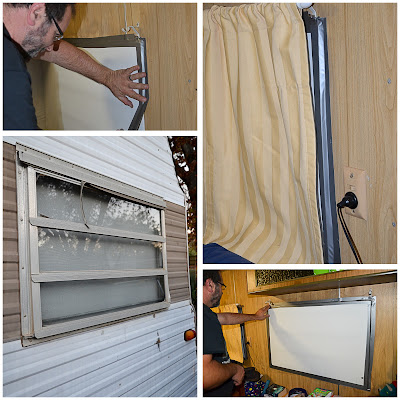 We were hoping not to weather another Victorian winter - particularly when living in a caravan - but good things come to those who wait, so we remain hopeful and are doing our best to wait patiently.

While we're waiting we are keeping busy, better preparing our van for much colder temperatures.  It was 5 degrees the other day when Nick was heading to work early in the morning - and at that stage, it was only April!

Nick and I have discussed several ideas for window insulation.  After talking with another caravanner, I had suggested exterior canvas covers but sourcing cheap canvas proved difficult (and Nick wasn't sure our efforts would yield positive results).

We headed to Bunnings this morning, researching materials.  Corflute seemed the best option, given we wanted something waterproof and able to withstand strong winds.  At that stage, the idea was to screw the panels directly to the outside window frames - however once home again, it was obvious that plan wouldn't work and would need a fair bit of modification (ie. extra effort and expense).  After further pondering we decided to buy the panels and fix them to the inside of the windows.

Double-sided tape was our first choice as an adhesive but it was considerably cheaper to use gaffer tape, so we bought that instead.  The van is old, so we aren't concerned about keeping the walls in pristine condition. Once the curtains are back in place, the panels are not visible and only a little of the tape shows.  (From the outside, the panels look very similar to the white thermal backing of the curtains).

The materials cost a little under $75.00 and will cover all the windows.  Nick has installed five panels so far, four around our princess bed and one on the side window adjacent the door.  (I like to look out my window before getting up in the morning, so have requested a peep-hole slide when the major work is done)!  There already seems to be an improvement and we are looking forward to a cosier caravan when the other windows are finished.
Posted by Happy Hamby Campers at 23:13 2 comments: 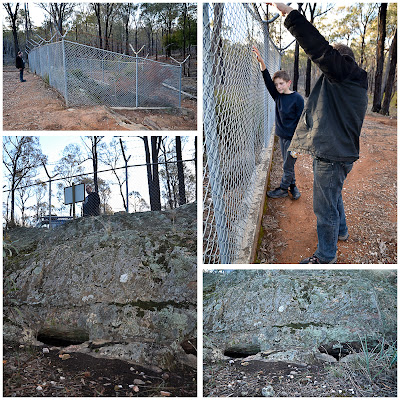 "To the south of Maryborough are four rock wells dug into sandstone by Dja Dja Wurrong people prior to European settlement.  The holding capacity of the wells is 168 litres and [they are] regarded as the best example of such wells in Victoria."

Although we'd seen some rock wells on TV/DVD, no-one had viewed them in real-life - so we obtained directions and set off.  The tourist information officer had lived in the area since his childhood and said that when he was a boy, the wells still had their cover-stones (to prevent pollution and evaporation) but over time the covers had been damaged or stolen.

Given the history of damage, the wells are now enclosed by a high fence.  The unprotected water didn't look greatly inviting but in the past the wells had been an important source of drinking water due to a lack of permanent creeks in the area.

The tourism officer had sketched the well configuration for us, explaining that the two centre wells were dug straight down, while the wells at each end were dug diagonally (which also reduced evaporation).  Seemingly three of the wells are united under the surface, creating a sizeable holding supply.  Although our view was obscured by the fence, I'm glad we visited.
Posted by Happy Hamby Campers at 20:58 No comments:

Email ThisBlogThis!Share to TwitterShare to FacebookShare to Pinterest
Labels: May 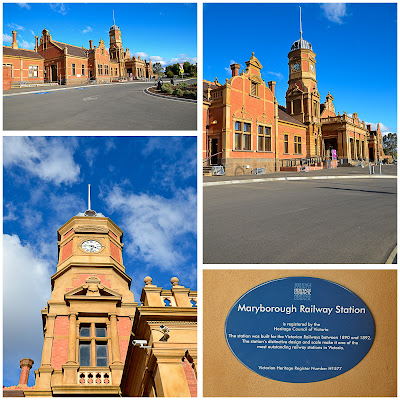 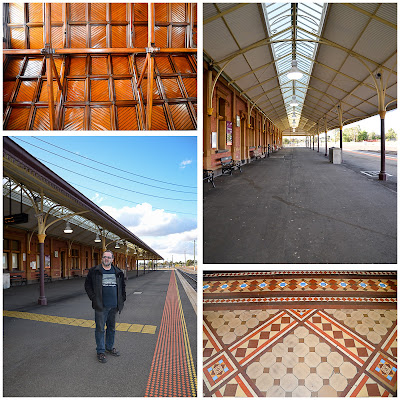 I'd been researching Maryborough Railway Station when I found information on Quartz Mountain.

What prompted my sudden interest in Maryborough Station?  I'd chatted to a traveller staying at the park.  He and his wife had a local friend who collected them for an outing to Maryborough, particularly to see the station.

Later that evening I asked about their day and the fellow spoke very highly of the station's architecture.  He had been a bit bemused in the morning but quite animated after the visit - so obviously the building was impressive.

Vaughan stayed in the car but Nick, Erin and I walked around the station.
It was a gorgeous building and we were glad to have seen it.  While there we collected a few leaflets and brochures from a stand in the main foyer.  I spotted a reference to Aboriginal rock wells, which prompted a detour to the local tourist information centre so we could obtain directions to the nearby site.
Posted by Happy Hamby Campers at 20:55 No comments: 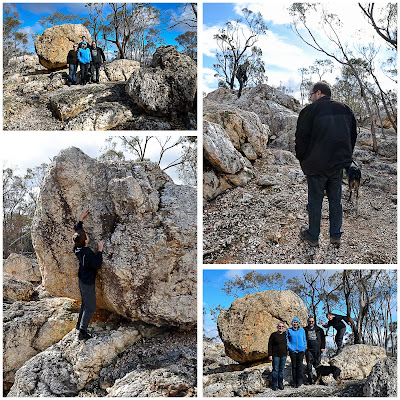 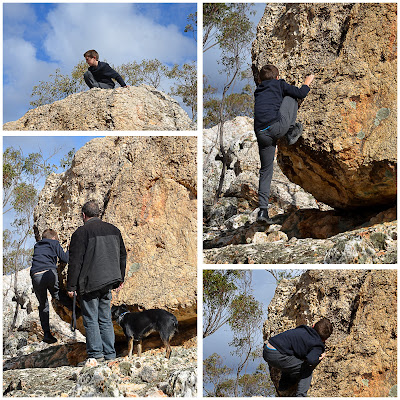 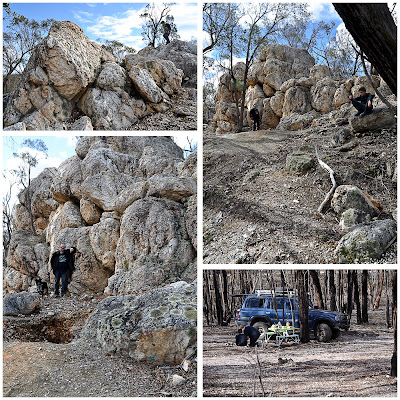 Someone said to me recently that we go interesting places, which is true but we do make a point of exploring the areas we find ourselves in.

I was researching the Maryborough Railway Station when I spotted a reference to the "hidden gem" of Quartz Mountain.

Given our recent Carman's Tunnel mine tour where a quartz reef had been fully excavated, I thought it would be neat to see one still in the earth - and it was!  What a place!

I'd taken a group shot of the four of us on 1 May 2011, so packed my tripod for a comparison pic - and was very chuffed we found such a great spot.

Vaughan was keen to light a (small) fire, which took quite a while as the ground and kindling were damp.  While waiting, we set up our picnic table and had lunch.

When the fire was eventually lit, it seemed a shame to waste Nick and Vaughan's efforts - so we boiled the kettle for tea, coffee and hot chocolate.

Although there were no facilities at the mountain, we spent a few hours enjoying the peace and quiet - before heading off to Maryborough.
Posted by Happy Hamby Campers at 11:28 No comments: