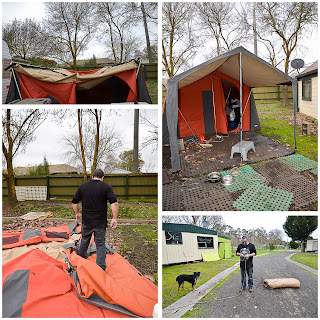 Given the snow and cold, we were pleased to pack up for eight weeks - and spend much of the colder months house-sitting.

Soon after we moved to the house there was more snow and we enjoyed watching it, while comfortably warm inside solid walls (and basking beside the wood-fire)!

Nick and Vaughan were snowed on while walking Bandit one very cold afternoon.  (They were not impressed)!
Posted by Happy Hamby Campers at 23:18 No comments: 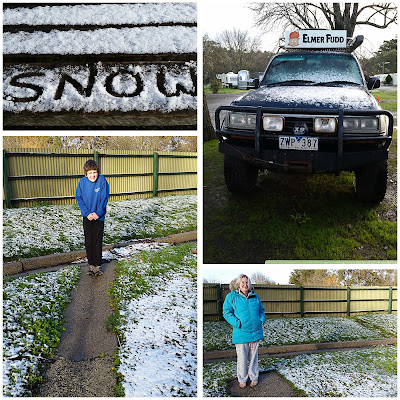 We were very pleased of Nick's repair work and our added insulation efforts when it SNOWED!  Wow!

Typically Vaughan debated the snow forecast with me when I collected him from school.

He was quite adamant we wouldn't get any snow.  I listened to him while watching rain fall on the windscreen of the car.  The rain looked odd - because it was actually ice! (Nick was sleeping in preparation for night-shift, so missed seeing that first round of slushy stuff).

It was around 6:00am when Nick arrived home this morning.  He said it had been snowing on the freeway while he was driving and there was snow on the tent.  The rest of us huddled down in our blankets and asked him to show us a photo!  There was still snow on the ground when Vaughan and I got up later and we were very gleeful on the way to school, seeing cars drive past with snow mounded on bonnets and roofs!

I roused Erin a bit later to come out for some snow appreciation - and it snowed again while I was taking photos.  Of course, as interesting as it was to see snow, we were less impressed to be trekking back and forth to the amenities block in the cold!
Posted by Happy Hamby Campers at 21:42 No comments: 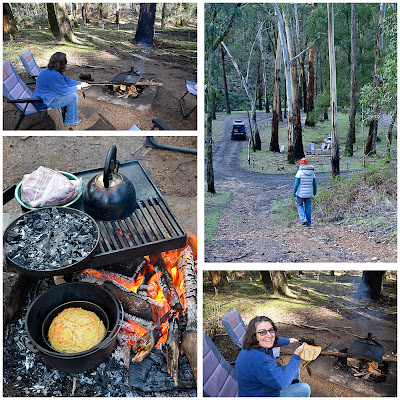 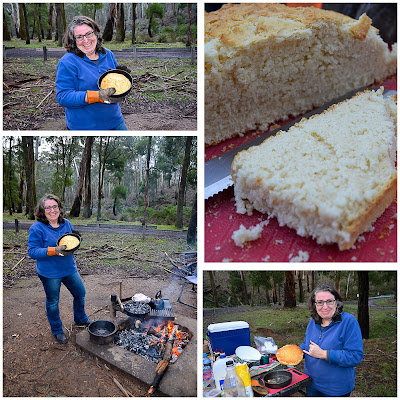 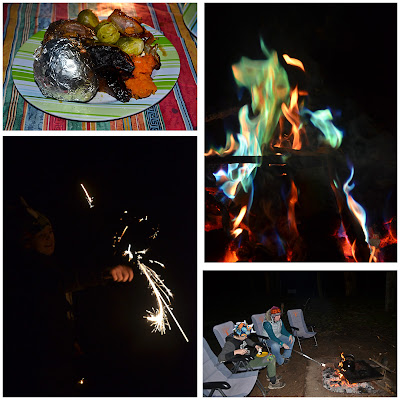 Much rain and local flooding in early July saw us taking advantage of a rare sunny day to head into our local forest.

We took provisions for lunch, afternoon tea and dinner - so were well prepared for a day of fun.

The creek was full, which hampered Vaughan's critter catching but our new toasting fork was thoroughly tested and Bandit shared some special Sausage King fare.

I made my best-ever damper - so need to brag about that.

Well, on searching the archives, it seems there was another rather fine example in 2011. However, there have been slightly charred offerings in between, most recently at Firth Park, so some fanfare is justified!

We stayed late so as to feast on camp oven roast dinner, toast giant Aldi marshmallows and then admire three packets of Mystic Fire (when all the cooking was done).

Back in March we first tried one pack of Mystical Fire.  It was pretty but the effect is definitely more impressive with three packets!

We finished the night with a sparkler finale.  Better than staying home!
Posted by Happy Hamby Campers at 23:09 No comments: