Nick had planned a geocaching/bush-walking adventure, so we were up reasonably early and departed home at 8:30ish to head South to Berowra (on the way to Sydney).

We firmly believed we were heading off for a fairly easy, 6km walk and worked out we should finish well before 4pm.  Hah! We ended up walking 12.3km in total - and walking is definitely a euphemism for some of our efforts! (Nick and I were hobbling around for several days afterward).

I wore one pair of new glasses, so the ground was quite tricky in the beginning but I hadn't thought to bring a case to put the glasses in, so kept wearing them all day.  I took my new camera too and there are good shots among some failures.  I slipped twice and caused much panic when I fell the first time.  I was concerned as I went down too - worried about smashing the new camera and my head (or vice versa)!

The second time I fell the landing was softer and I sat on all the leaf litter to recover.  We were scrambling along the edge of a small creek, lined with beautiful mossy rocks.  It was really lovely and we managed to appreciate it in spite of being completely over walking by that stage.  As I was sitting, recovering, we spotted a lyrebird on the other side of the river, so that was a bonus.

It wasn't long after that we decided we weren't on the track and should cross the river, which was a bit tricky.  Nick was all for me jumping and trusting him - but I said I would do it my way.  It was a tenser moment, for sure!  We successfully negotiated all the mossy, slippery rocks and met the track on the other side, which we followed for all of ten metres or so before crossing back over to the side we had been on!

It was definitely an adventure!  Vaughan was tired by the end but held up really well and kept going even when he had had enough.  There was an Aldi when we got back to suburbia, so we stopped in for some choc and biscuits.  Vaughan was very appreciative of a small Toblerone - and kept muttering "now, that's a reward!"

We caught a train from Mt Ku-ring-gai station back to Berowra, where we had parked our car. As we exited the train, we spotted some walkers that we had passed earlier in the day (they had done the reverse loop to us). Although we were tempted to take the lift up to the road level, we were conscious of the other group watching, so we walked up the many stairs instead!
Posted by Happy Hamby Campers at 22:30 No comments:

Email ThisBlogThis!Share to TwitterShare to FacebookShare to Pinterest
Labels: Geocaches, May 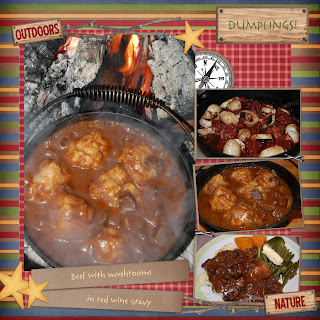 I actually made this twice - or tried to!

My first effort was one of those fantastic flukes, using various left-over bits from the cupboard and fridge - the last of some red wine, a few spoons of french onion soup powder, mushrooms that were languishing ... you get the idea.

The camp oven worked it's magic and the result was superb - in fact it was so good that I forgot to take photographic evidence!  The pics here are from my second effort, where I tried to recreate what I had done previously.  Of course, it wasn't exactly the same but it was still wonderful - and this version had dumplings!
Posted by Happy Hamby Campers at 23:55 No comments: 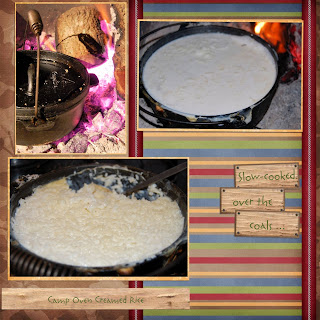 Following the success of the ashed damper, I decided to try another fire cooking experiment.

I sometimes make creamed rice in the slow/thermal cooker, late at night so that it is ready for breakfast the next morning.

I decided to set the camp oven (filled with rice, reconstituted powered milk and some sugar) near the dying fire, just before heading off to bed.  By morning the milk had condensed wonderfully and the rice was cooked perfectly.  It was all still quite warm - and made a rather decadent breakfast!  Mmmmm-yum!
Posted by Happy Hamby Campers at 23:31 No comments: