Highs and lows of tyre purchasing ... 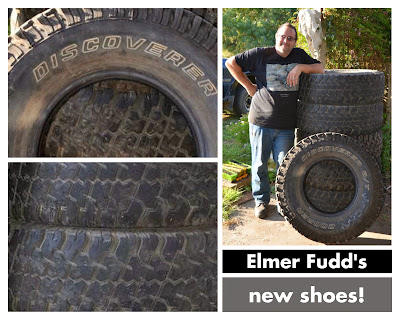 It's a sad fact that I am shrinking as I age. I've lost several centimetres - and now Elmer is set to gain some extra height (on top of his 2 inch lift).   Soon I'll need a step ladder to get in!

We had a lot of trouble with tyres last time we were up at Yowah, so wanted to ensure we are well set-up before our next visit (in early 2014).  Nick has been researching tyres and prices for a number of weeks, comparing brands and deals for new and used tyres - trying to get the best possible value for our dollars.  We wanted six tyres in total, so as to have a matching set and two spares for Elmer.  (The two purchased at Cunnamulla will be put on the trailer, and best one remaining will be the trailer spare).

Depending on size and brand, a new set of six would cost between $1,240.00 and $2,300.00.  Given our aim of maximising holiday funds for our trip next year, buying second-hand was a better option, though the desired size was difficult to source - particularly when trying to find six that matched. 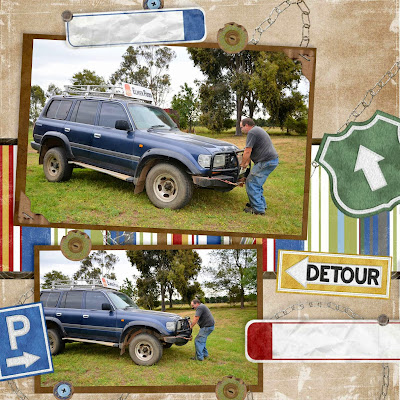 As Christmas approaches, Hamby Home(in)stead has been a hive of activity.  I've been sewing and crafting, shopping from the storage container as much as possible.

Nick has been playing mechanic, preparing Elmer Fudd for our time away next year.

I asked Nick to write about his work.  He did.  In point form. 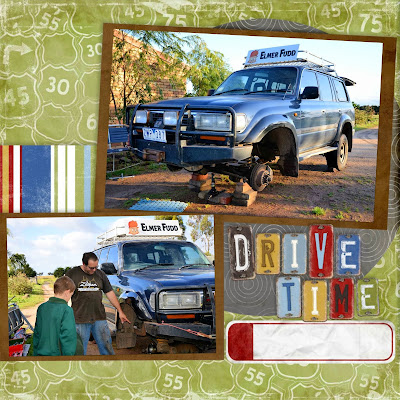 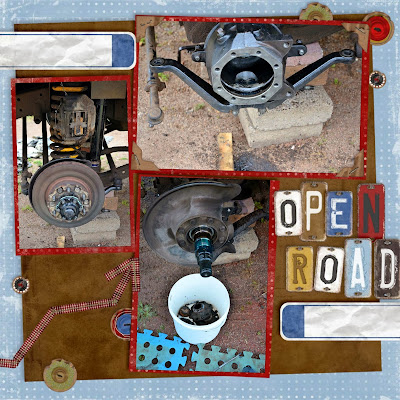 Elmer has had a diff oil leak for some time.

Prior to relocation our then local mechanic quoted the repair at $1,600.00.

Nick did a lot of online research and decided to do the work himself, after buying appropriate tools.

This is what he did.


"I took the front wheels off.  Took the brake callipers off.  Undid the wheel bearings and took the hubs off.  Took the top and bottom knuckle bearings out.  Replaced the drive shaft seals that sit in the diff housing.  Put the whole lot back together with new bearings and seals.  Works great now.  Cost about $600 including new tools to get the job done.  Saved $1000". 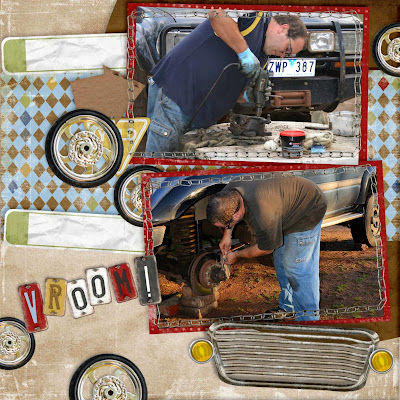 Gotta be happy with those savings, particularly when there is more work to be done - and other improvements on the wishlist!

Posted by Happy Hamby Campers at 23:28 No comments: 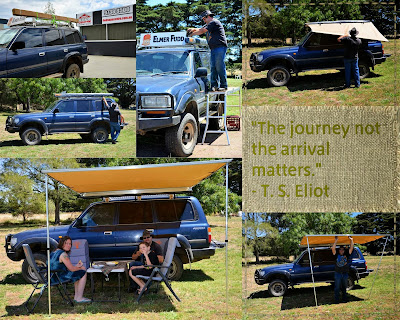 In early October we took advantage of a 4WD Supa Centre sale and purchased an awning for Elmer Fudd. (It was a pleasant drive to Lilydale and we enjoyed a picnic at Maroondah dam afterward).

Our bargain purchase has been stored since, waiting for Nick to ponder the best method of attaching it to Elmer's roof-rack.  Yesterday was the day of doing - and the Fudd Truck now has a fully functioning awning.  Of course, we needed to test it out right away, so had a quick fruit break picnic to celebrate Elmer's new accessory!
Posted by Happy Hamby Campers at 08:22 No comments: