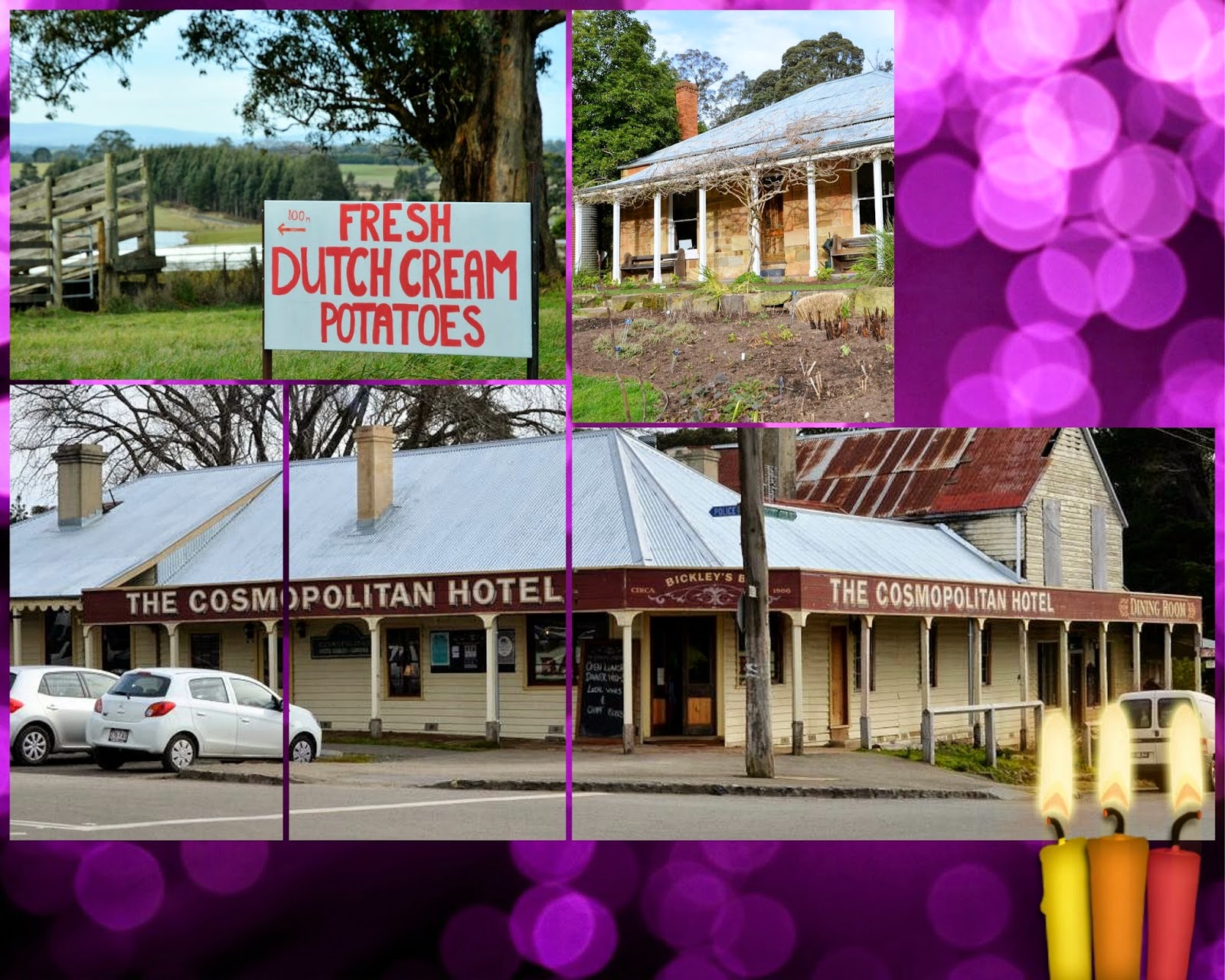 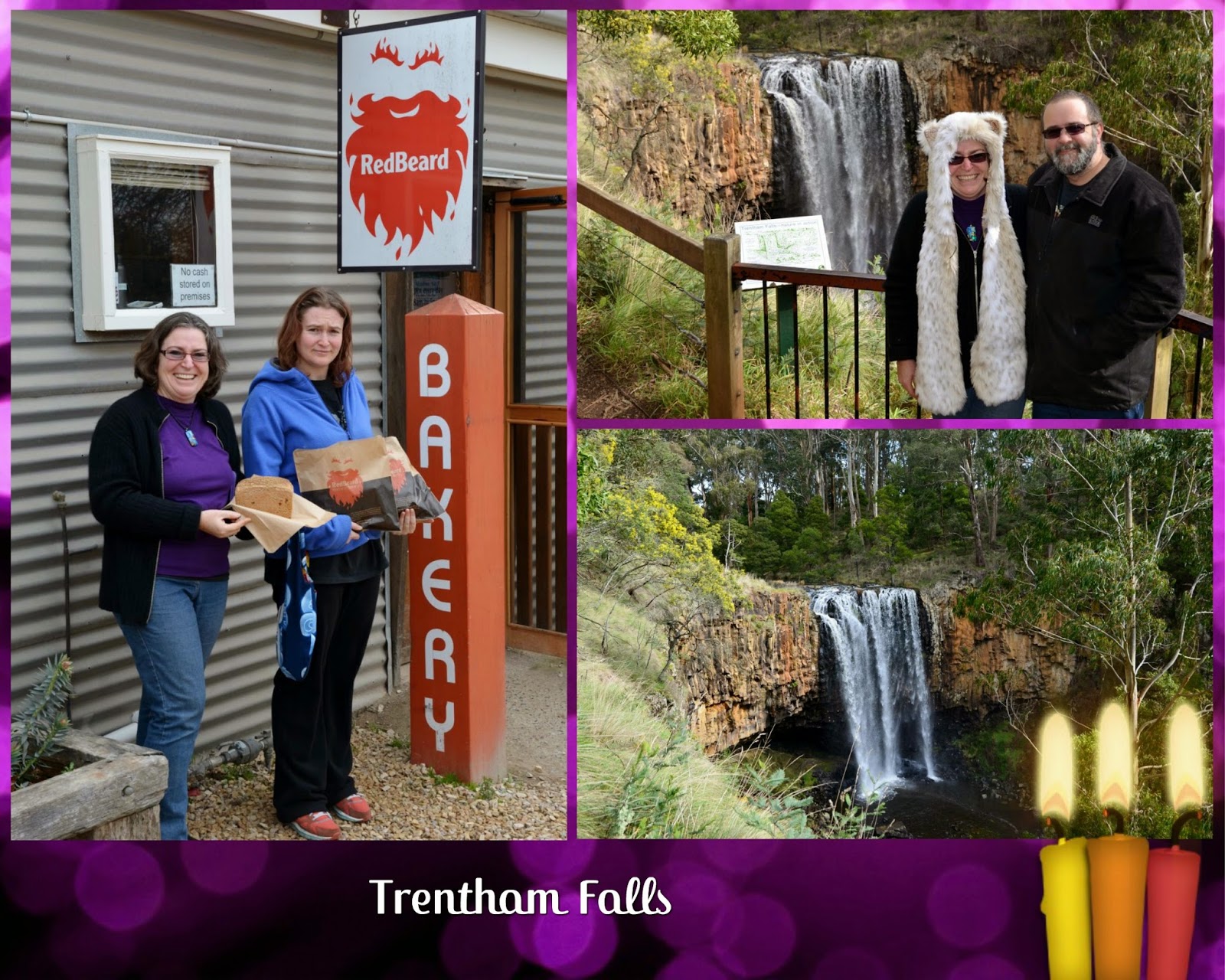 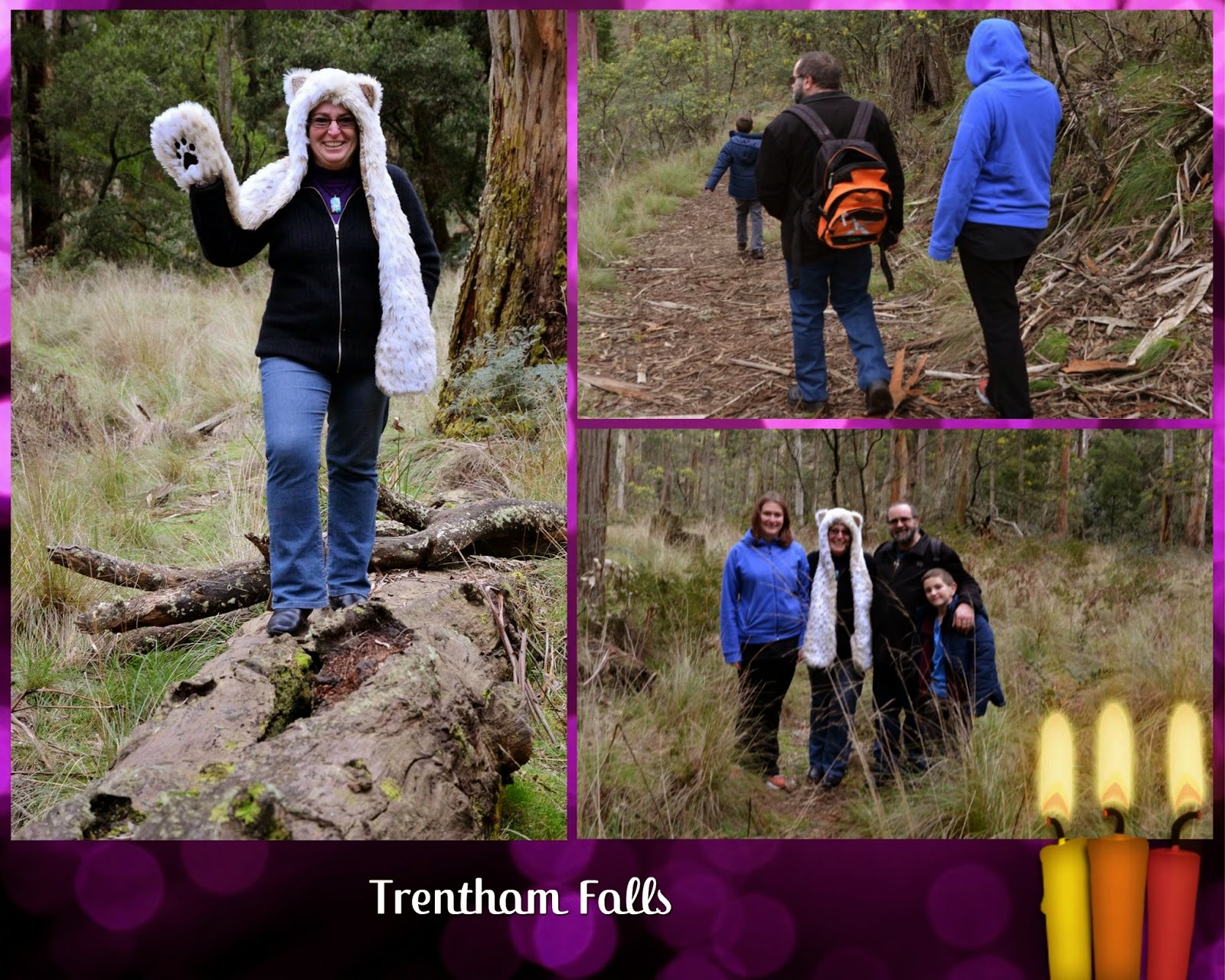 I do like a birthday outing - and I've had some wonderful excursions in the semi-recent past. Several were enjoyed at various lookouts in the Watagan Forest and in 2012 we ventured about 200km from home to Burning Mountain - with a stop-in at Paradise for afternoon tea!

Last year I was heavily lurgi-ed so the day was spent with a big box of tissues and a blanket.  It was memorable, though not in a good way!

I was a bit stumped for destinations this year.  Somewhere new has a lot of scope given we've only been Victorian residents for a little over 18 months.

After a fair bit of pondering, I found this online gadget, which creates a circular area around a point on a map.

I used my age to give the radius from home and then selected a starting point more or less on the perimeter.

Some more research revealed a "Wombat Forest Drive" map document that took in my desired destination and a few others as well.  We didn't follow the route exactly. Our first stop was Trentham, to pick up beautiful sourdough bread from the RedBeard Bakery.  From there we back-tracked out of town to Trentham Falls for our picnic lunch and some geocaching.

It was considerably warmer as we wandered around the valley below the falls.  There were lots of huge gums, mossy logs and little birds flitting about the scrub.  Erin and Vaughan spotted a swamp wallaby too. 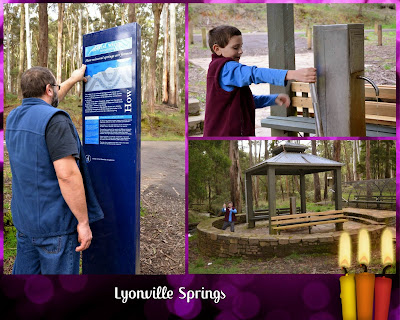 From the falls, we made our way over to Lyonville Mineral Springs to sample some birthday bubbles.  Hah!  Mineral water straight from the ground tastes nothing like the bottled stuff - sadly!

We didn't stay long at the springs, though noted the picnic area for a longer stop on another occasion.  It was quite pretty with a little creek flowing nearby.  The Garden of St Erth was our next destination.  We are not members of The Diggers Club so didn't tour the garden but rather enjoyed looking at all the many plants for sale. 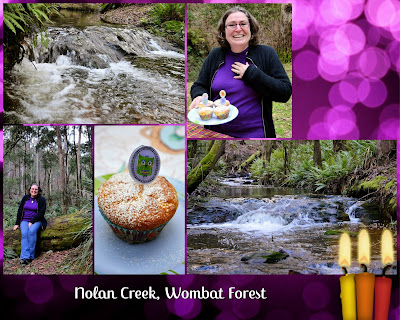 Our last stop was the Nolan Creek picnic area for afternoon tea and birthday cake(s).  Such a beautiful little spot - we'll be back for sure to explore further and praps tackle the bushwalk in the link.

Although the picnic area was in the Wombat Forest, I didn't hold much hope of seeing any wombats and said as much to Nick when we were heading home - just as one jumped onto the road in front of us! I was too startled to take his/her photo but there was much excitement! I leapt out of the car to get a better look, closely followed by Vaughan. Not surprisingly, our running caused the wombat to run faster! 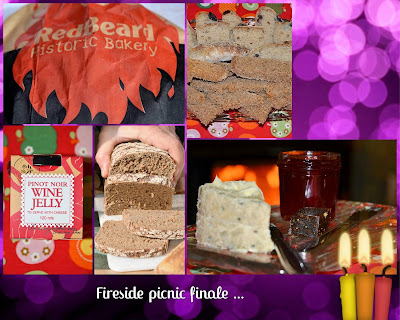 We headed home under an almost full moon, well pleased with all we had seen and done. The day ended with a fireside finale feast - three picnics in one day has to be a record!

Funny story: as we drove along one of the country roads I spotted a sign advertising Dutch Cream Poffertjes - and although it seemed unlikely, I kept a hopeful eye out for special birthday pancakes. On the return trip, Nick took great delight in reading the Dutch Cream Potatoes sign!
Posted by Happy Hamby Campers at 18:42 No comments: 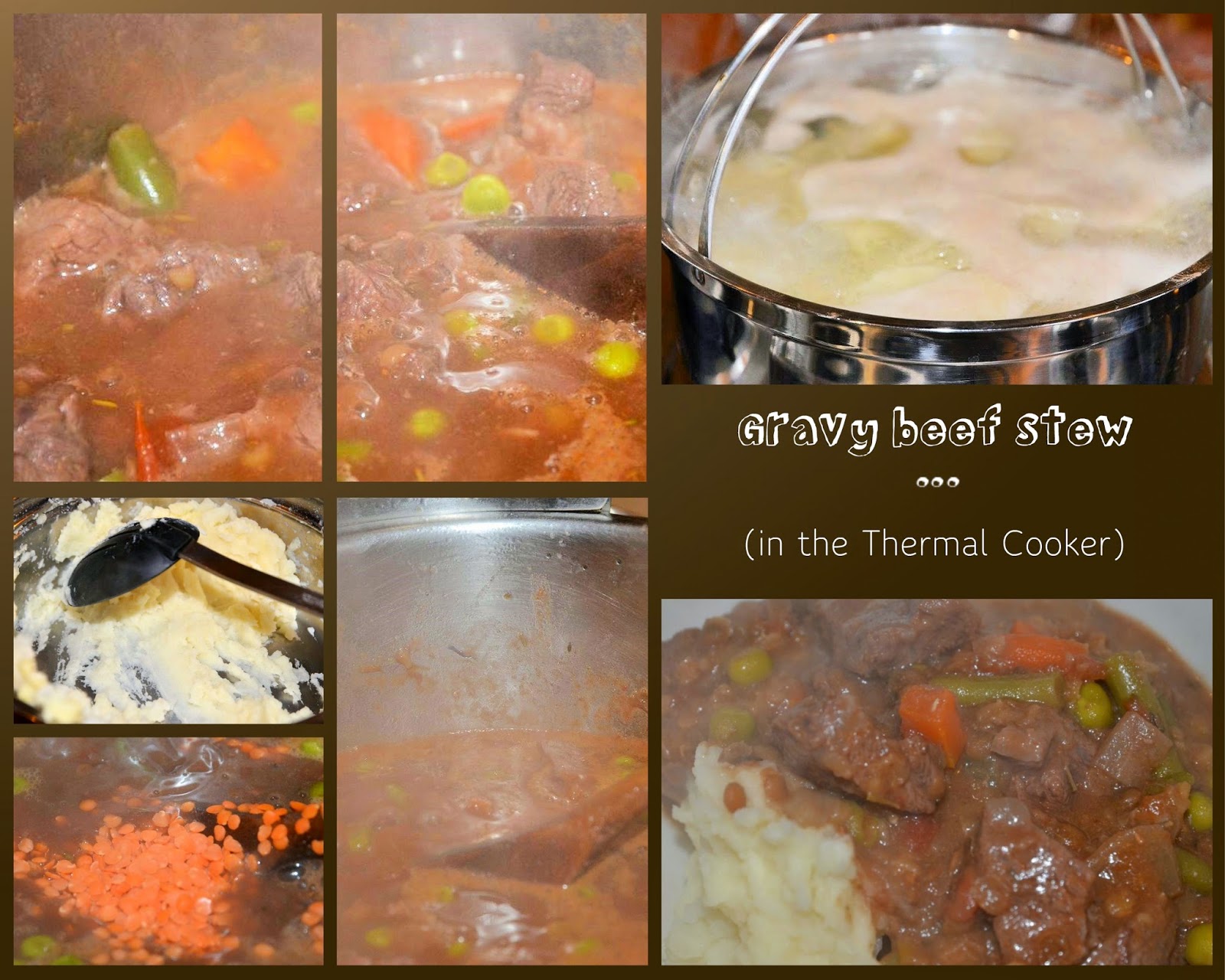 I often use my thermal cookers to make soup - and usually the large volume being cooked means there isn't enough room to use the smaller pot for a separate item.

Today I made a simple beef stew - and remained very mindful of wanting to cook potatoes to serve with it.  Even so there was only just enough space, about 7.5cm, for the top pot - so it was a bit gravied on it's base, when lifted out!  (As thermal cookers work on retained heat, being full to capacity - and thoroughly heated - provides the best energy-bank).

I don't use a recipe for stew, so the ingredients vary according to what is in the fridge and cupboard!  On this occasion I used:-

I browned the onion and meat in a little olive oil, then added the other ingredients - in no particular order!  There is no loss of liquid during thermal cooking so I include brown lentils break down to thicken the gravy.  The mixture still looked a bit wet, so I also used some red lentils for extra thickening.  (Dried mushrooms and vegetables are good for the same reason but generally I only have them if camping).

I left the mixture to come to the boil while I prepared the potatoes.  Again, I filled the (smaller) pot as full as I could - and brought the potatoes to the boil.  All up the larger pot probably simmered for at least 30-40 minutes while I was organising the potatoes (and other missions).  The smaller pot simmered for a much shorter time.

Both pots were put into the outer thermal pot and locked down till dinner-time.  Our stew was thick and steamy hot when we ate it, around 6-8 hours later.  (There was plenty left to freeze as two further family-meal portions for later occasions).
Posted by Happy Hamby Campers at 20:30 No comments: