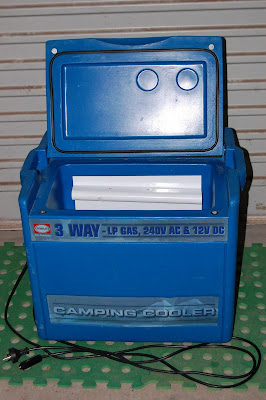 Our first camping trips had been undertaken with a couple of large (freebie) eskies.  One was the remainder of a camping/boating fridge (after compressor removal) and the other a promotional bonus won by collecting many Pepsi Max lids!

(No prizes for guessing who drank all the Pepsi Max)!

We were lucky to get a great deal on a 3-way fridge in the January 2010 sales and used the fridge at left throughout the year (as well as the eskies).

Fortunately, the same bargain price was again available in June, so we took a pair of these blue "fridges" with us to Yowah.

They worked very well for us at that time but obviously were not going to cope with the much higher Summer temperatures of our planned Christmas trip.

Our September move had prompted considerable and vigorous culling/ebaying.  Some of those proceeds were put toward a fridge upgrade of two 40-litre Engels.

Although a larger unit was cheaper, we believe our two offer a greater degree of flexibility.

(They were used as freezers at Yowah because the shack had a fridge).
Posted by Happy Hamby Campers at 17:30 No comments:

Though the old girl had served us well, our July trip to Yowah had further highlighted the Commodore's limitations for our preferred camping locations.

Nick undertook extensive 4WD research/price comparisons once we were home (after we moved house - again!).

On 18 October we drove down to Sydney to collect our "new" monster truck (aka a '96 Landcruiser with 2" lift, bull-bar, winch and roof cage)!
Posted by Happy Hamby Campers at 18:00 No comments: