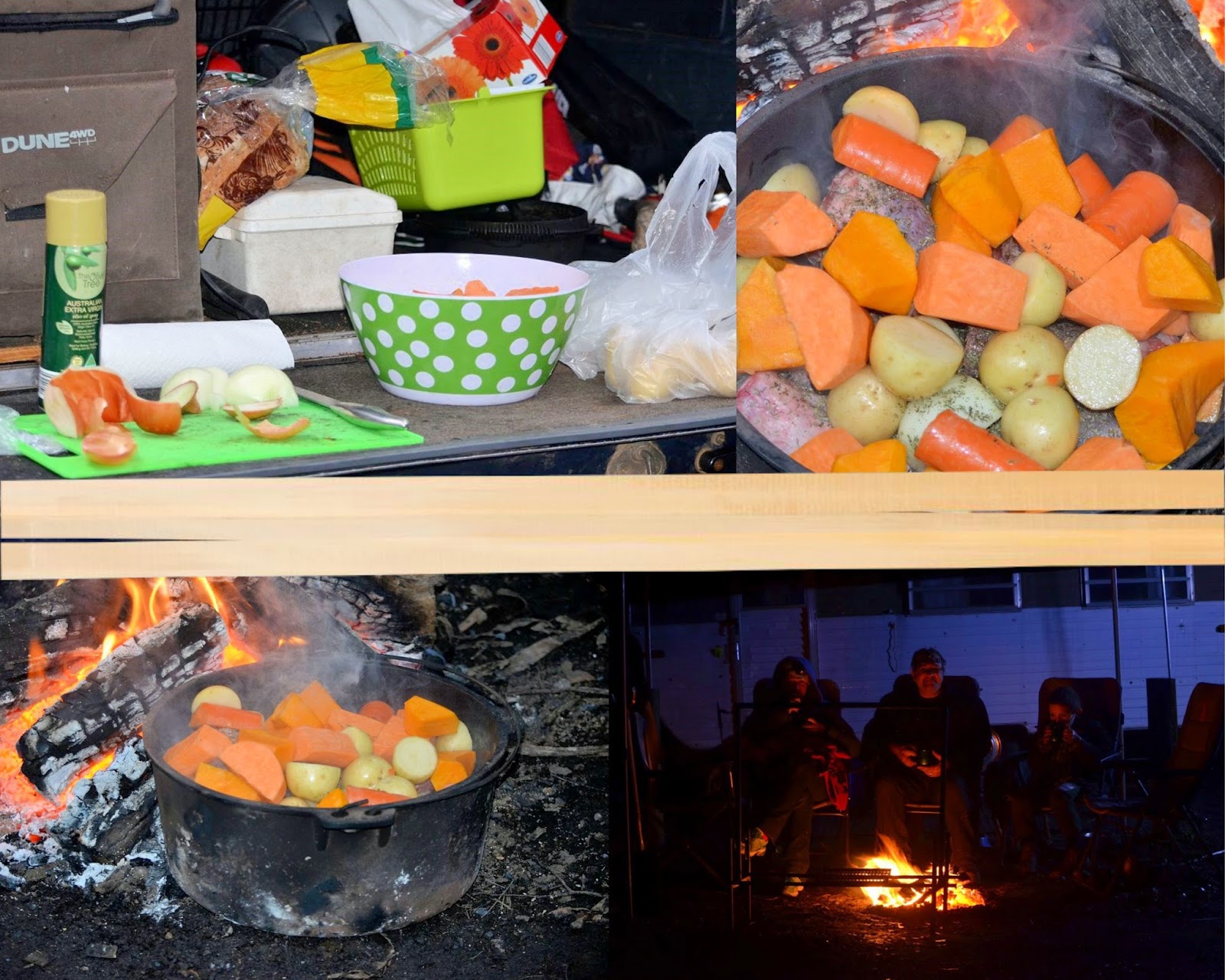 Although we weren't adequately prepared for the rain, I had done some good work for our meals.

As well as packing pre-measured dry ingredients for our pikelets and plain damper, I'd peeled and cut the vegies for a baked dinner.  I was very pleased of my preparations!


I belong to several camping and caravanning groups on FaceBook. In a recent discussion, one lady shared some of her preparations for an upcoming holiday. She'd pre-packed many meals in vacuum sealed bags - including vegetables. I'm not sure I want to be as fully organised as that but I've started pondering the menu plan for our next longer trip. (I may even finally use the bargain dehydrator I purchased nearly two years ago, which is still sitting un-used in the pantry)!
Posted by Happy Hamby Campers at 20:21 No comments: 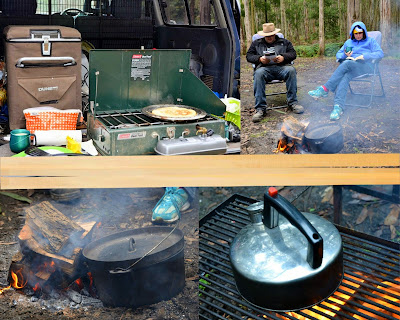 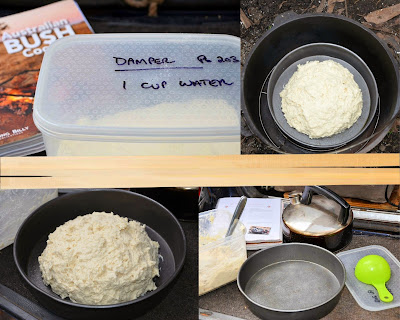 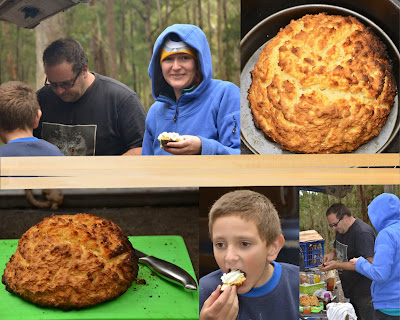 I tried something different on our last camping trip to Firth Park. Before leaving home, I measured the dry ingredients for our pikelet batter into a screw-top jar.

The plan worked well, so dry pikelet mix was packed again this trip.

I also measured the dry ingredients for damper into a container.  I used the recipe from my Australian Bush Cooking book, so noted the page number on the container lid.

In the past, I've taken flour and other ingredients to the campsite.  I'll still do that but given the soggy conditions and limited bench area, it was nice to have the dry measuring already done.

The container held 3 cups of self-raising flour, a quarter cup of full-cream milk powder and a pinch of Pink Lake salt.

I hadn't thought to pack any extra flour, so couldn't shape the dough smoothly when setting it into the cake tin, so it looked a bit rougher than other efforts.  You might have seen Nammo's comment on the previous post, likening the loaf to a "HUGE coconut macaroon"?!  Yep, that was a very apt description!

It's been a while since I've made damper in the camp oven.  (I used one of our Cobb Cookers while at Yowah last year to create an odd pancake-like version)!  This one was a bit burnt on the bottom but perfectly edible - particularly with home-made blackberry jam or pilfered plum preserve with lashings of canned cream!

Vaughan isn't a big fan of damper but eats it, so he can mound whipped cream on top.  If he was allowed to eat canned cream without damper, he'd be happier!
Posted by Happy Hamby Campers at 21:29 1 comment: 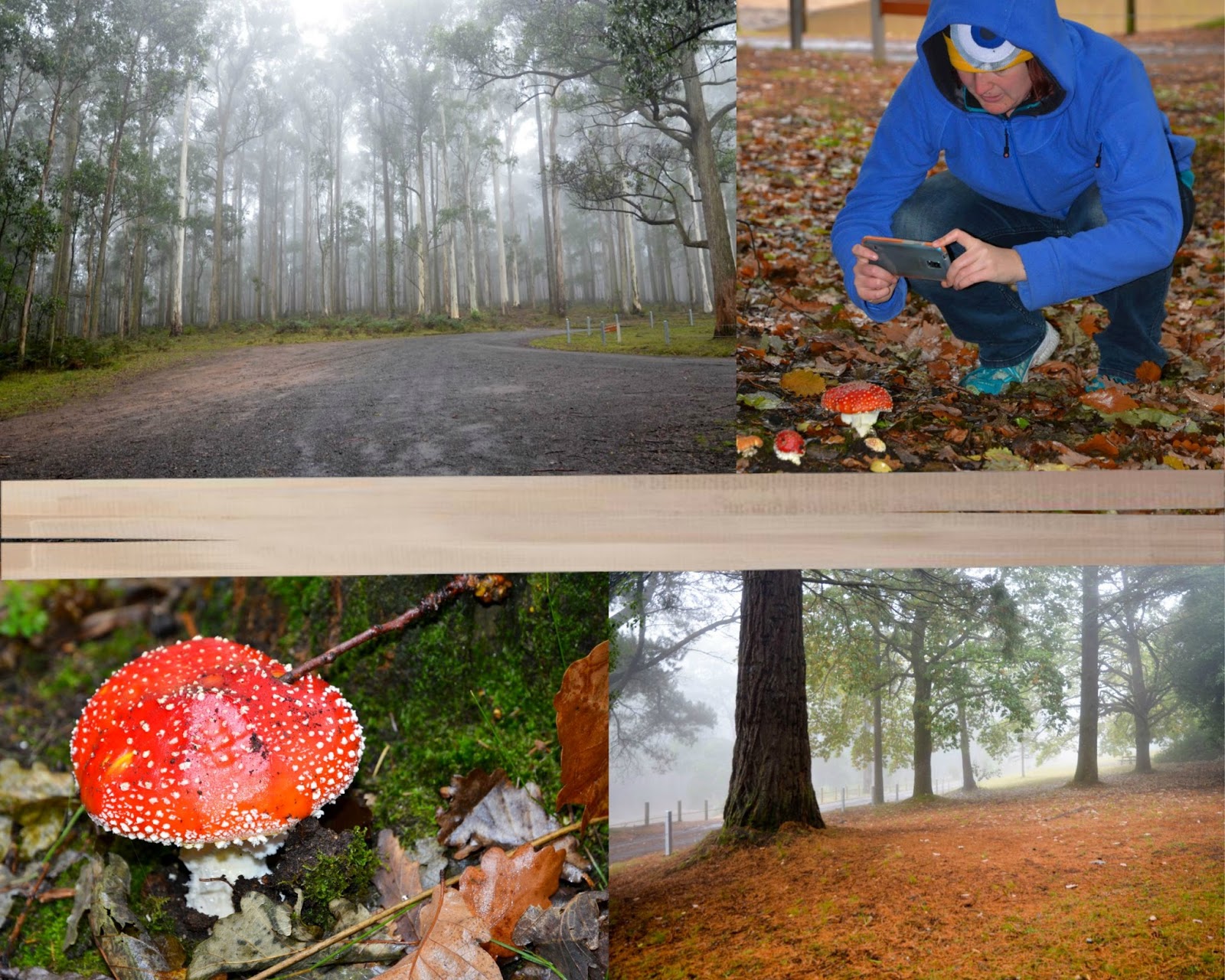 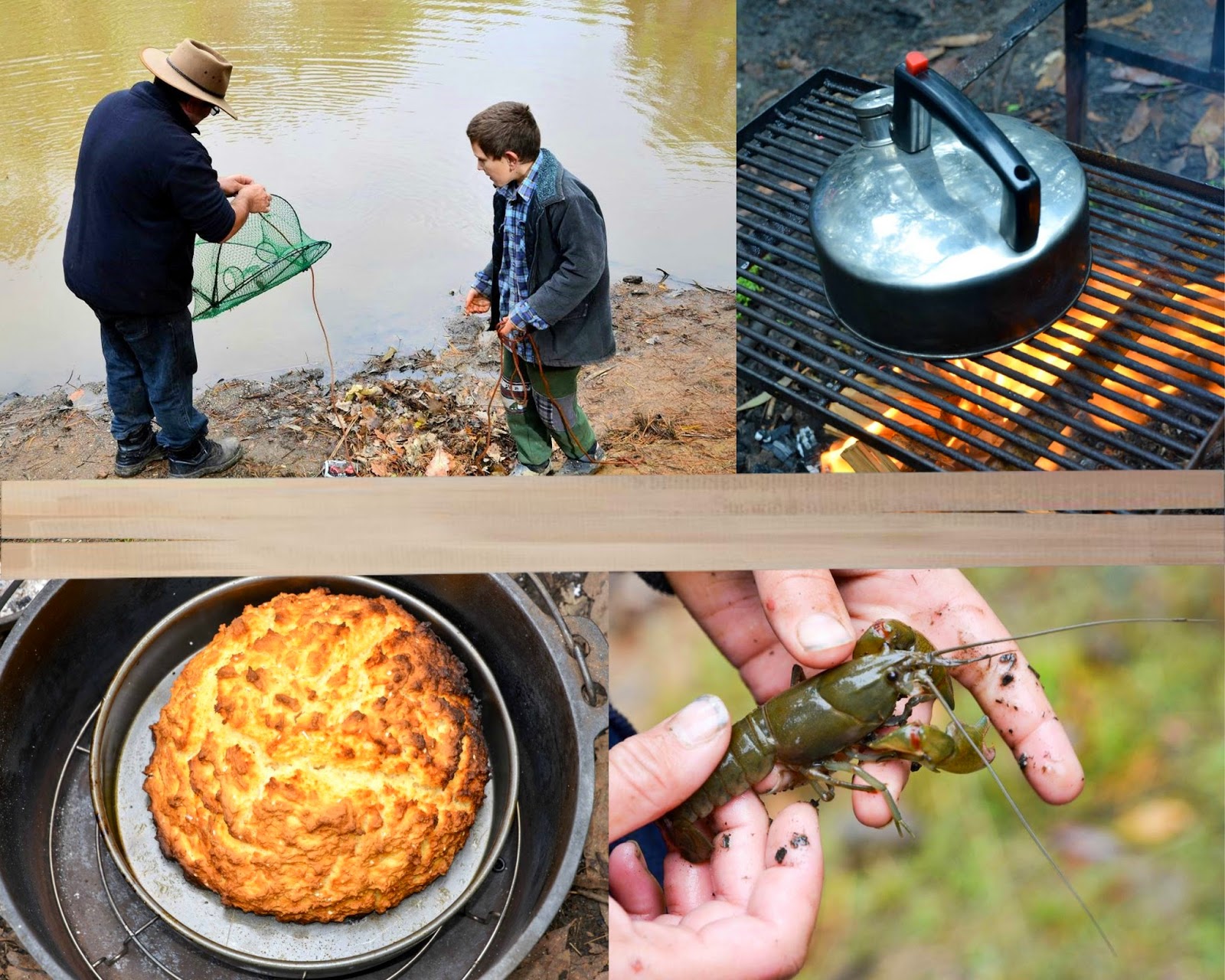 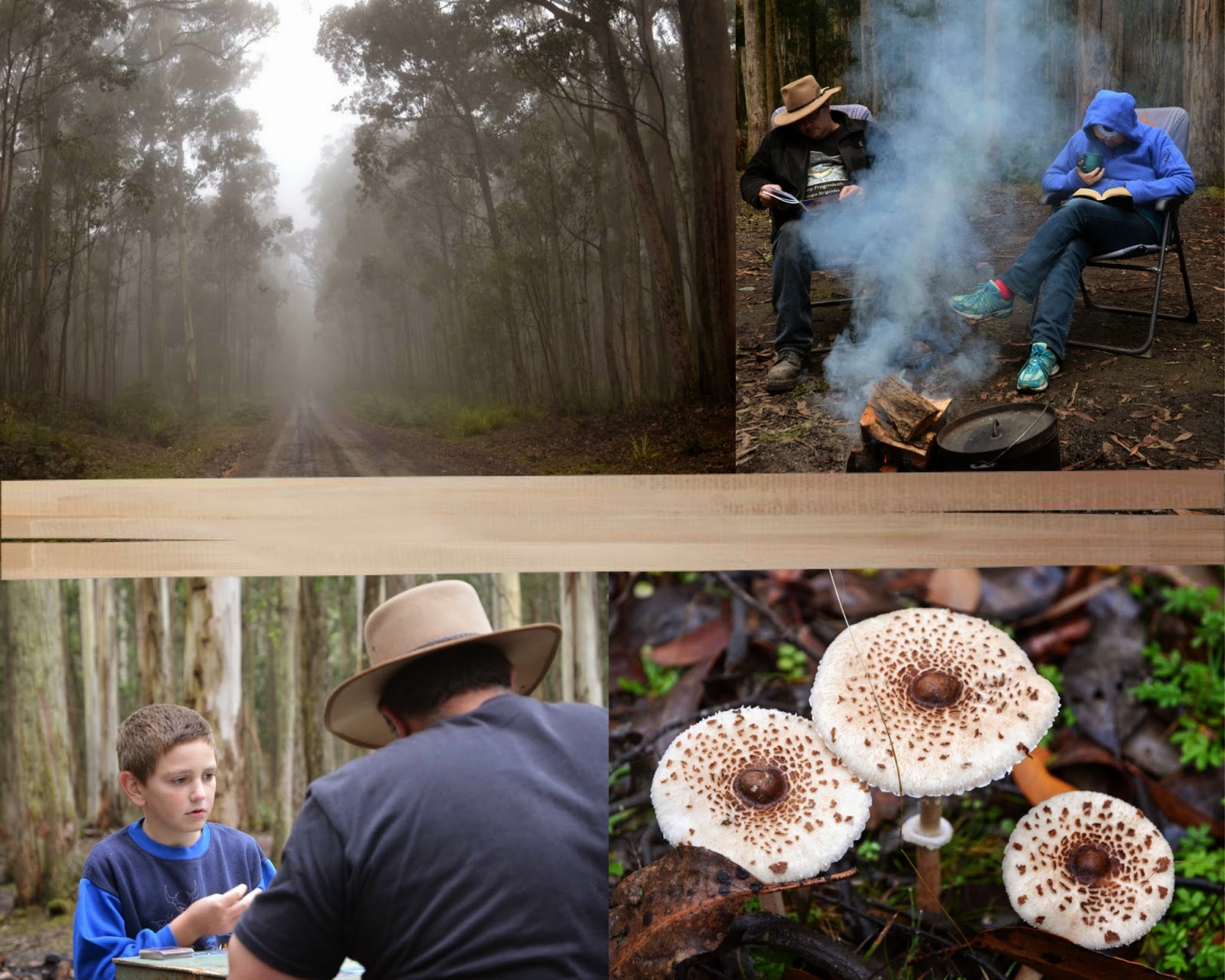 I have a reputation for dragging my family out in all kinds of weather - particularly since we moved to Victoria.  Given the conditions are so variable here, I've decided we can't stay home waiting for a perfect day - because we might never go out at all!

As much as our camping trip was cold and wet, we did make the most of our time at Firth Park.  There was mist on Saturday morning and quite a few mushrooms to admire.  Vaughan was very happy yabbying - on a self-imposed catch and release program.

I've since heard (via an online camping forum) that yabbies hibernate during the winter months, at least in Victoria.  I'm not entirely convinced so will be doing some research at home - and (when I remember) in the field!

We practiced camp oven cooking (and eating!) plus spent some time planning a longer adventure for later this year.
Posted by Happy Hamby Campers at 14:24 3 comments: 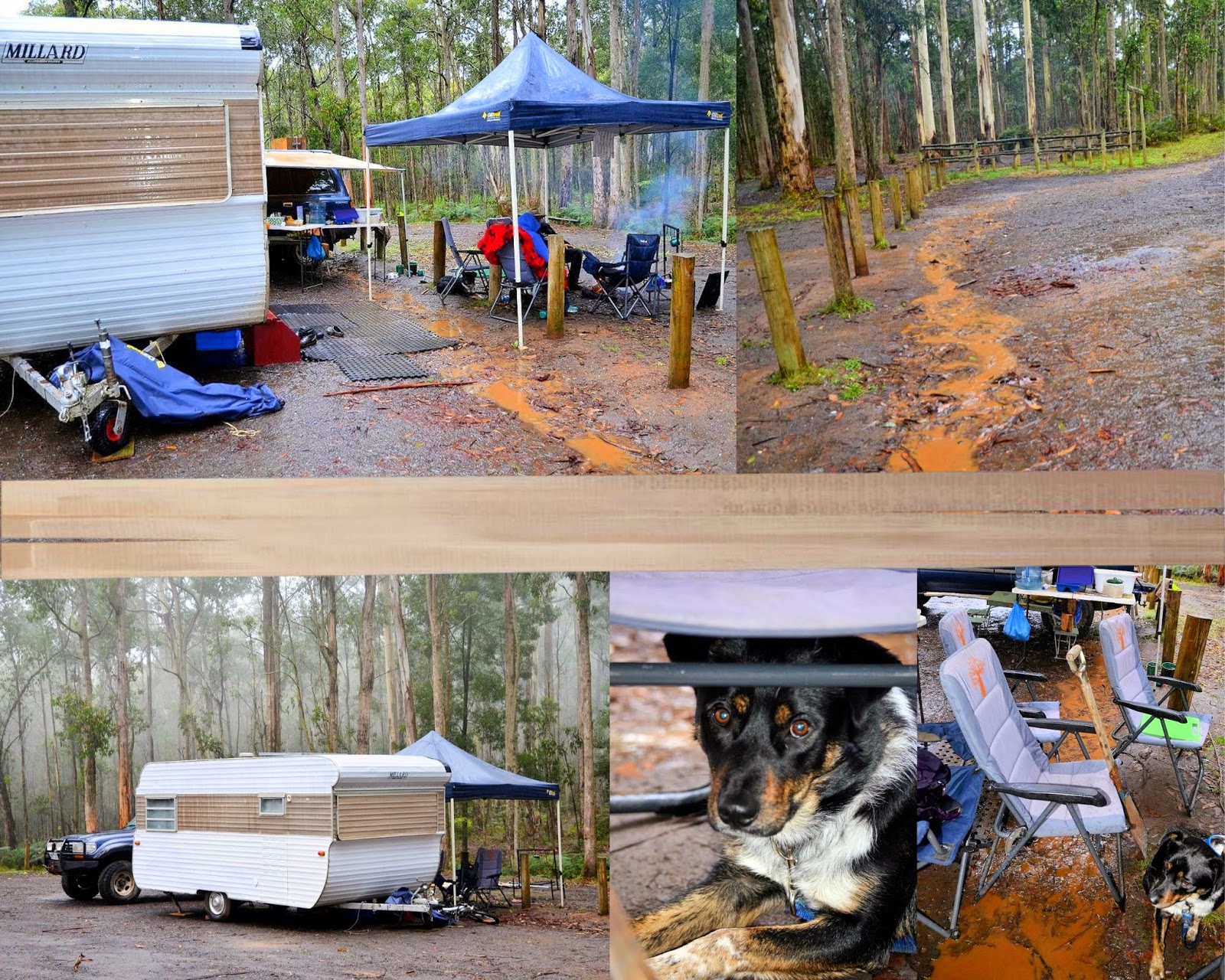 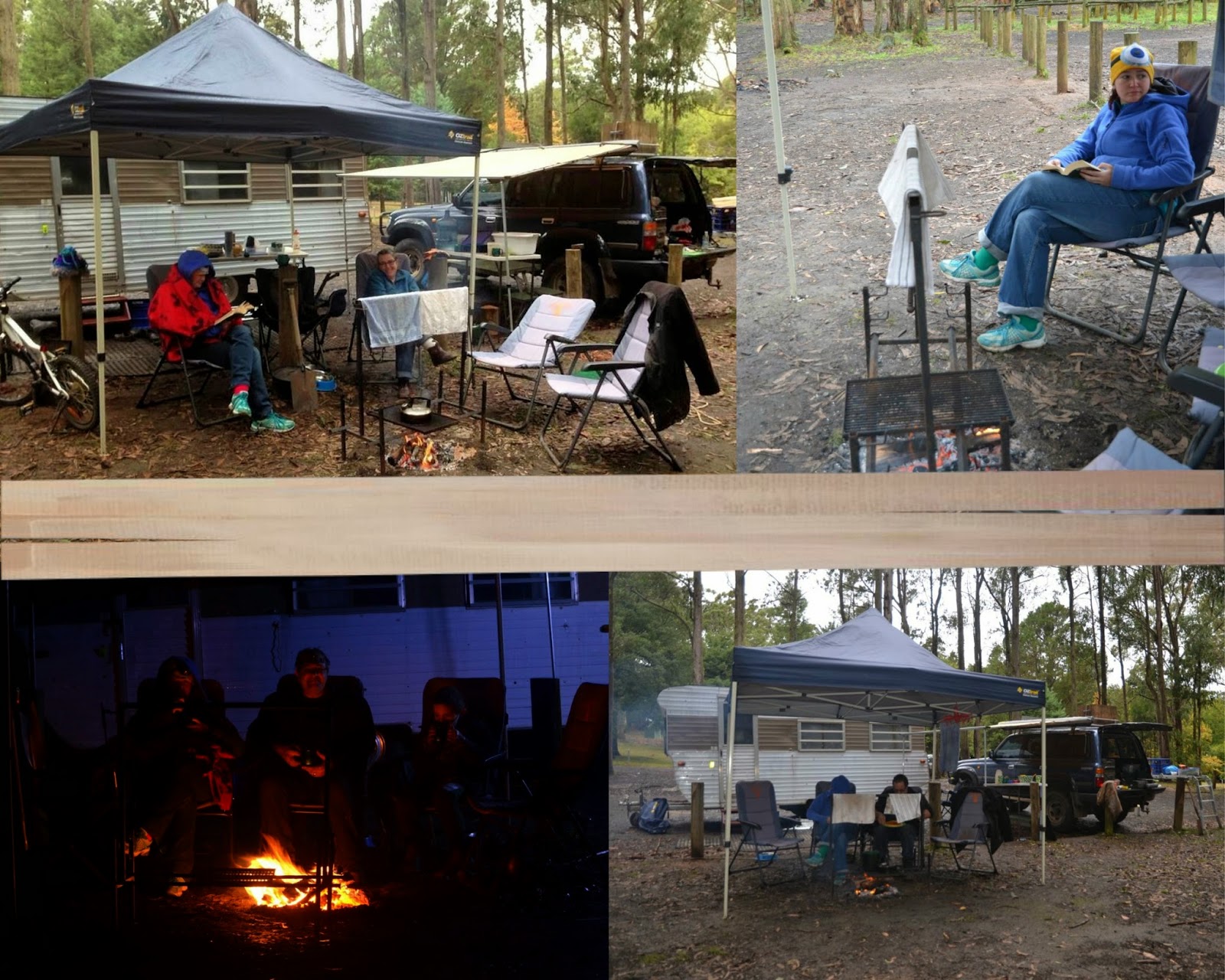 Nick recently moved back to shift-work and had a block of days rostered off. We used his free time to prepare the caravan, ready for camping over the ANZAC weekend (back to Firth Park).

Our original plan had been to collect Vaughan after his afternoon school ANZAC service and head off from there.

We were packed on time but plans were foiled by a family of earwigs living in the tail-light socket, stopping the lights from working. The pests were evicted, a loose wire fixed, lighting restored and we were off!

Although I had prepped our beds wonderfully for the cold, the skies were clear when we left home so no-one had thought much about the possibility of wet weather. We left our box of waterproof gear at home - and didn't even think to take an umbrella (for trekking back and forth to/from the loo)!

I'd only packed the camping mats at the last minute and we had one gazebo still tied to the drawbar, from our previous camping trip.  I had a couple of older towels and that was it.  Nick brought some firewood with us, which we very much appreciated as the wood on site was quite soggy.  (At times we needed to put the gazebo over the fire, to protect our cooking)!

We've camped in the rain previously and have endured much colder camping but the two weather conditions together were trickier to manage.  Bandit was distinctly unimpressed by the outdoor living - and no-one was reluctant to pack-up after breakfast on Sunday!  That's a first!
Posted by Happy Hamby Campers at 12:51 No comments: 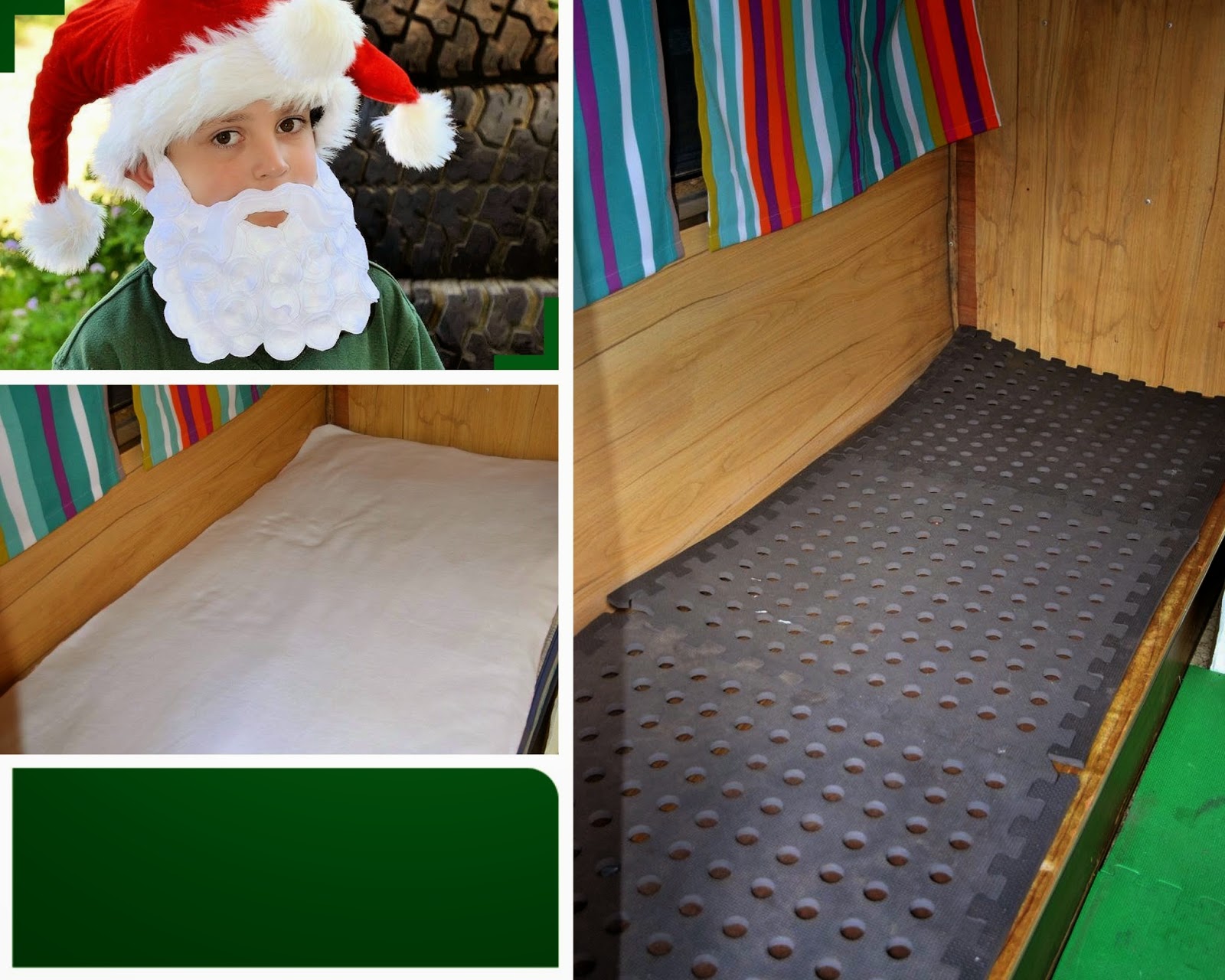 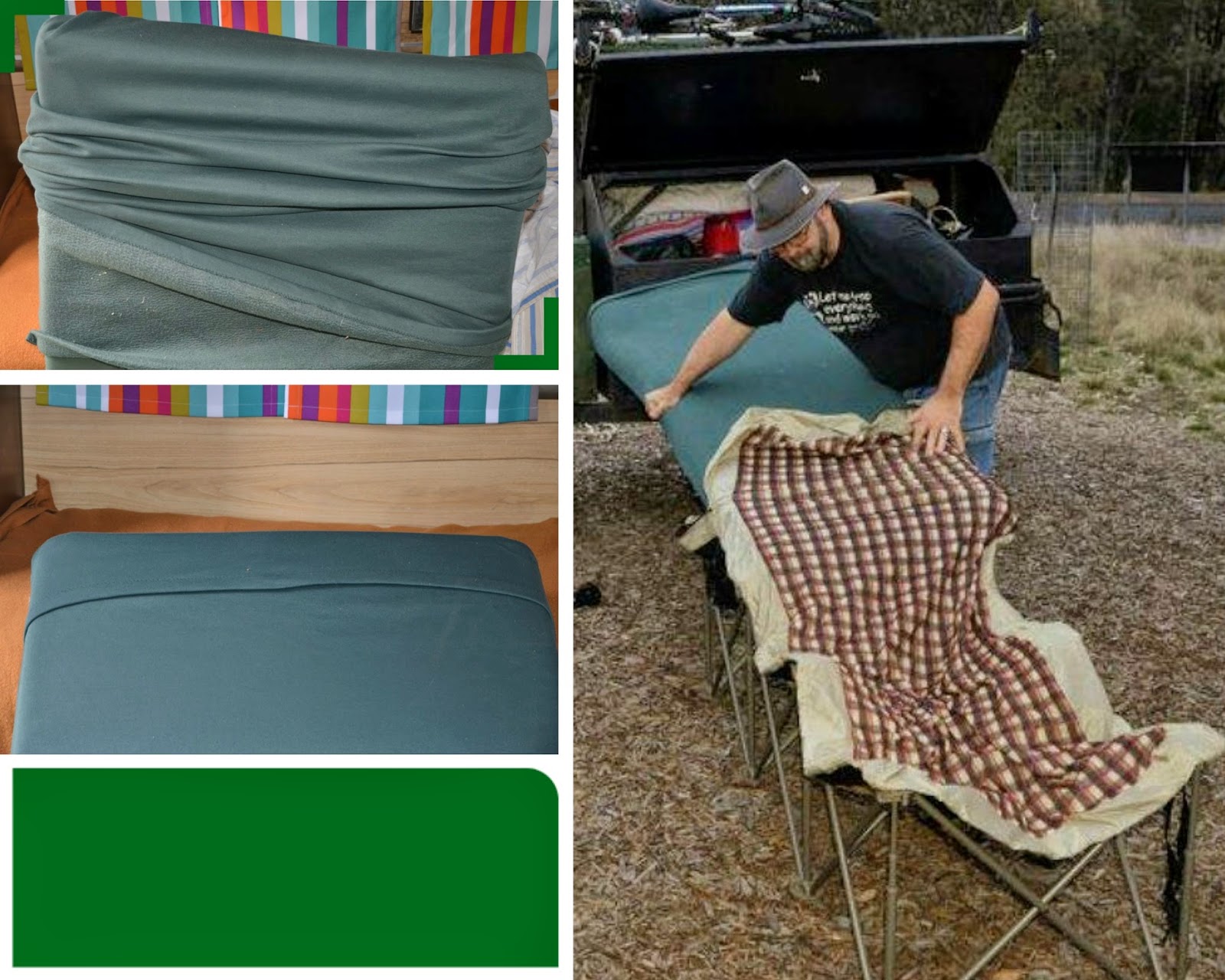 I've made a few references to my infamous fabric stash. Of course, I didn't set out to acquire so much material. It just happened.

For example, two Christmases ago we visited a liquidation warehouse. Among other great treasure, they had white polar fleece. It was the right/white stuff to make Santa beards for Vaughan's class.  I wasn't sure how much fabric to buy so asked for two metres, erring on the generous side.

The guy measuring was even more generous and once home I found I had 3.25 metres! It was a definite $6.00 bargain - and yes, that is a lot of Santa beards! We probably made around 40 as various gifts and still had a lot of fabric left. (I did say to Nick at the time that I wasn't sure what I was going to do with it all - and he suggested I stick it in a white foam box in the storage container)!

I decided to use (most of) the Santa beard remainder as a under-blanket for Erin's bottom caravan bunk.  I'd previously added insulation in the under-bed storage compartment but decided to use some camping mats under the mattress also.

Several years back, when we were still in our original tent and using the air beds on legs, I made polar fleece covers for the single air mattresses.  They cut the chill from the plastic and I've kept them, even though the beds were recently sold.  Last year the covers did duty as heavy curtains at home, so I'll have to work on a better plan for our kitchen window this year!

I fitted the cover over Vaughan's self-inflating 4WD mat that he is using on the top bunk in preference to an innerspring mattress.  (The lower profile mat leaves more head-room).  It fit well and should provide some extra warmth.

Our bed was fitted with an older woollen under-blanket.  Although it was purchased as a queen size it actually fits the double-bed mattress better - so will stay there throughout winter.  Why all the preparation?  I'm hoping for some cold-weather camping and want to be as warm as possible during the nights!
Posted by Happy Hamby Campers at 17:24 2 comments: