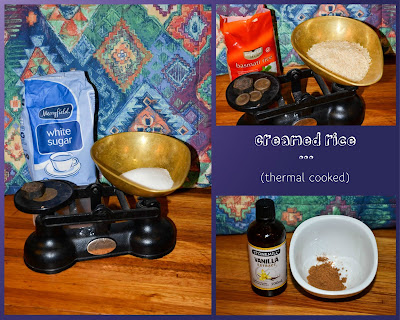 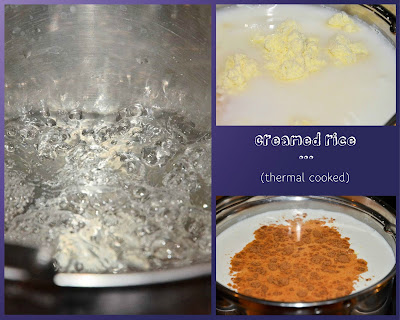 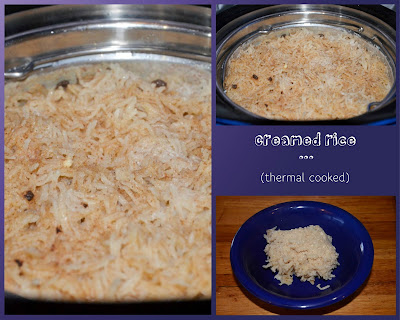 I realised quite late last night that even though I've said I make creamed rice in the thermal cooker, I haven't actually included my method.  Given I was making a batch, I took some photos and reviewed my notes from several years back.

Creamed rice is something I make every so often at home.  It used to feature far more regularly on our breakfast menus - as evidenced by our expanding waists of the time!

I generally use Basmati rice, sugar, powdered milk, vanilla and some spice.  As there is no liquid reduction in the thermal cooker, I make up less milk than I would if cooking by other methods.

The ratio used last night (at 11:00pm) was:  190 grams of rice, 100grams of sugar, 4 cups of water, 1 cup of powdered milk, about a teaspoon of mixed spice and a generous quantity of vanilla (home-made in a recycled bottle)!

I used the small pot for the rice.  It only had a short time on the stove-top, before it sat over the large pot of boiling water in the thermal cooker.  The longest part of the process was boiling the water - and taking photos!

The rice was still nicely warm when I sampled it this morning at around 7:30am.  It was a fairly firm texture and I'll probably try 4.5 cups of water next time.  (The usual 6 cups of water that I use for other methods is a bit too much in the thermal cooker).
Posted by Happy Hamby Campers at 08:20 2 comments: