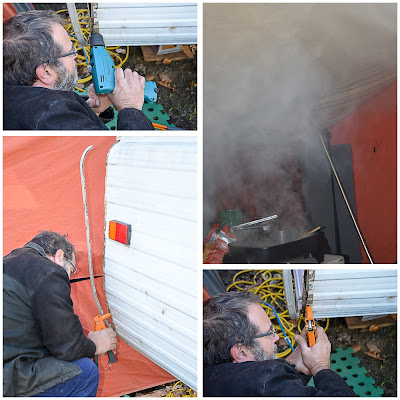 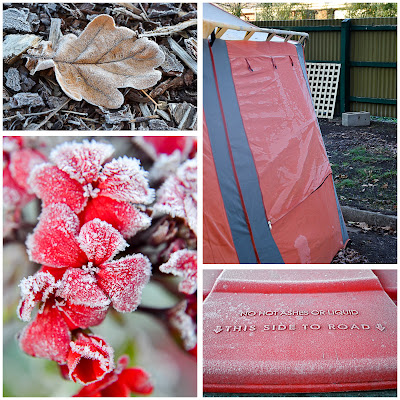 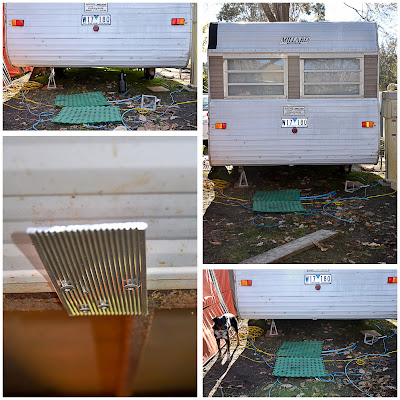 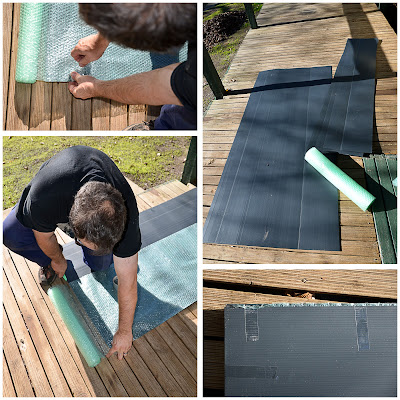 Nick worked in stages to repair the back of the van.  The first step was to remove everything stored beneath our Princess bed and shift it to the back room of the tent.

There was a definite draught coming in from the back of the van.  I was very aware of it when doing my nightly back stretches.  To combat the cold I hung a blanket across the bed frame, tucked in along the mattress.

(You can see how cold it is some nights, there is a photo at right showing my tent kitchen looking like a steam room from the cooking)!

We made several trips to Bunnings to acquire a pop rivet gun, rivets, a length of aluminium and a strong drill bit.

There was very heavy frost earlier this week.  Nick had checked the tent thermometer at around 5:00am and the reading was -6 degrees!  It was 2 degrees a couple of hours later when we roused ourselves for the day.  There was ice on the tent and frost everywhere. Bandit's water bowl had iced over - the world was definitely C-O-L-D!

When the ground thawed, Nick worked on the caravan.  He riveted the metal cladding and also replaced the edging band.  The next day he installed three aluminium brackets to further anchor the cladding in place.

Nick had taken out the back interior wall lining while working on the repair.  It seemed a good opportunity to fit some insulation, so we went back to Bunnings to see what might work. Sheets of black corflute (thinner and far more flexible than the white variety we'd used for the window insulation) were on sale for $7.00 a sheet.  We bought two.  They were cut to size and sandwiched around layers of leftover bubble wrap (which had been used to successfully cut the cold coming off the van door).  The interior wall lining was replaced over our DIY insulation sheet. The van is much cosier now the repair is done and insulation added - hooray!

During our Ballarat trip a hook for the door blind came loose. It has now been replaced but for a week or so, the door was without it's blind - and we really noticed the difference. However I was heartened by the fact that we'd all coped with the -6 overnight temp with the draught from the back end and the missing door window blind. It gives me hope for our comfort as winter advances!
Posted by Happy Hamby Campers at 00:37 No comments: 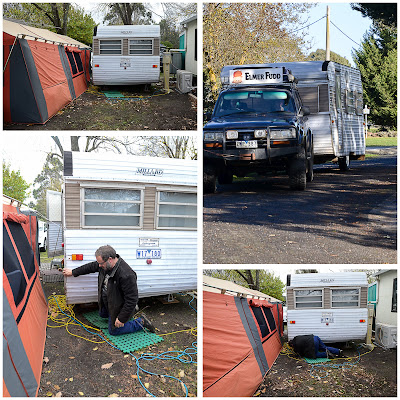 The weekend after shifting sites, we had a couple of nights away - for a change of scene!  We left the tent set-up and took the van with us.

Nick had been on night-shift, so we travelled on Saturday afternoon to a caravan park not all that far from our usual one.

We stayed two nights and then came home on Monday morning.  I drove back first, delivering Vaughan to school just before 9:00am.  When I arrived back at the tent, I was impressed to see how well it had fared during the strong winds of the weekend.  (A large tree had broken off just beside Elmer Fudd at our temporary site and the weather had been similarly wild in the larger region).

Nick and Erin returned around mid-morning.  As they drove in, it was obvious the back of the van wasn't right.  The cladding had pulled away along the bottom edge.

Once the van was parked beside the tent, Nick inspected the rear-end damage and starting thinking about it's repair.  There was a definite gap between the exterior panel and the floor.  Fortunately it didn't seem that anything had fallen out during the 30km drive.  Lucky!
Posted by Happy Hamby Campers at 19:36 2 comments: 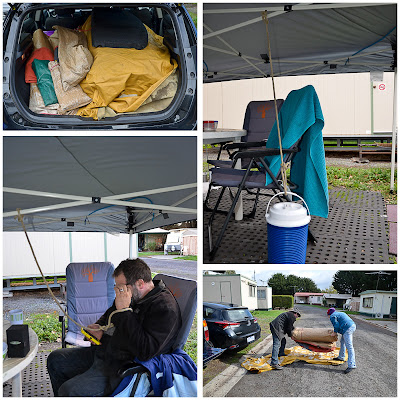 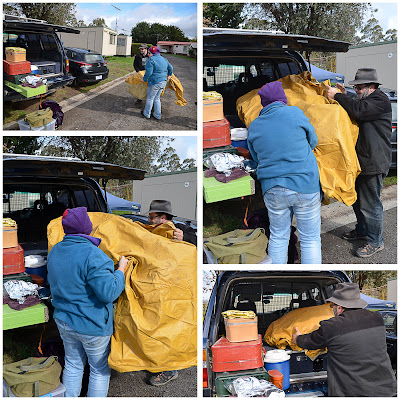 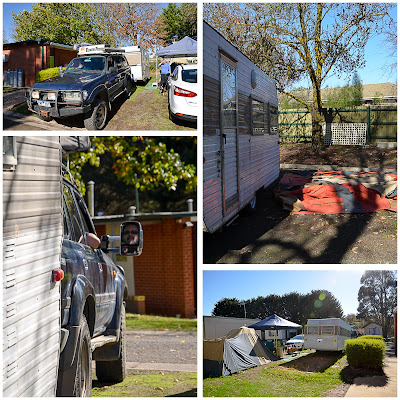 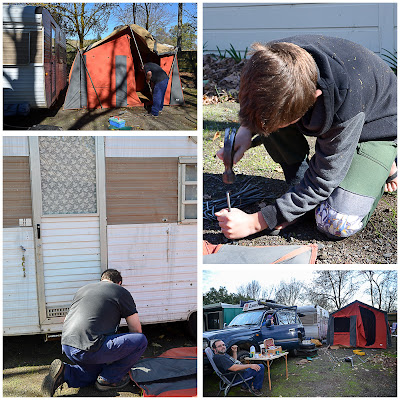 We were all sick in early May. That fact and a week-long run of strong wind and heavy rain caused us to think more seriously of a better winter set-up.

Nick had to rescue the gazebo very early one morning, before it blew away completely. Of course, all the stuff that lived under the gazebo (semi-protected) also needed to be packed away - something of a challenge at 1:00am!  (You can see Nick holding a rope attached to the gazebo in one of the pics, in another the rope is tied to a cooler jug weight).

Although it looks as if our van had an annexe at some stage, it isn't set up for one now.  In any case sourcing a second-hand annexe was tricky - and buying a new one, far too expensive.

After a fair bit of discussion we decided to get a cabin-style canvas tent.  Nick found one listed on Gumtree and we brought it home the same day that we inspected it.

The "new" tent was larger than we anticipated, so we moved sites to better accommodate it.

Our new site is better protected from the elements, so there were a few benefits to moving.

We spent a weekend shifting from one site to another.  The plan had been to start early but we were still recovering from our lurgies, so slept in and were only moving slowly when we did surface.

The new tent had a pole missing, so we bought a new one from Rays Outdoors. The replacement pole worked well in terms of height but had a thicker spike on the end, so other parts required modification as a result.  (Nick used his drill to make larger holes in some of the connecting poles)  Even with those hiccups, everything was done by the end of Saturday, though we still needed to fully empty the old tent at our former site, plus pack it down.

The new tent is marvellous - a huge improvement to our living space! The kitchen is set up in the front room, which is an awning with velcro-ed on walls. There is no attached floor, so our foam mats are covering the ground. It's still vastly better than the gazebo.  In fact, the whole tent is far more stable than the gazebo and being able to stand/walk throughout is a huge bonus. (The gazebo stayed down often, cos is was more wind resistant that way.  I needed to duck under it to get to the tent and then duck down again to enter the tent).

The main tent is divided into two rooms, both with sturdy floors - and these now have carpet! We use the room adjacent the "kitchen" as a dining and sitting area.  The back room is our walk-in-wardrobe and storage area.  We have a small heater in the dining room and when the doors to the other two areas are zipped shut, we feel rather cosy - hooray!

Our carpet came from Spotlight. We bought four rugs during a recent sale.  Even better, we had a voucher that gave us an extra discount, so our rugs were cheaper than foam mats - and a lot more stylish!
Posted by Happy Hamby Campers at 20:36 2 comments: