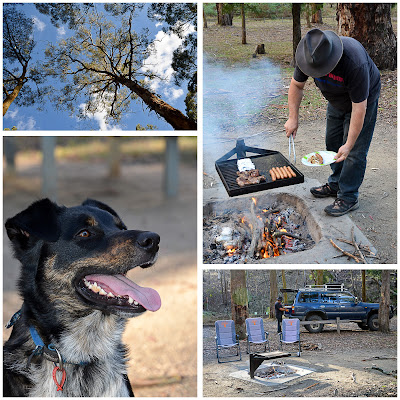 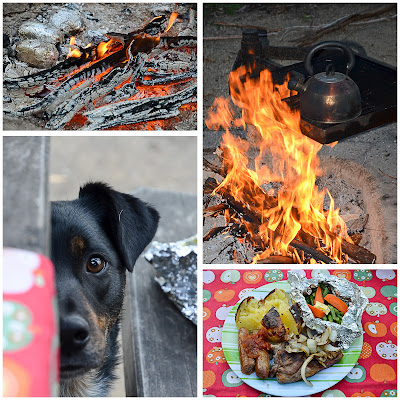 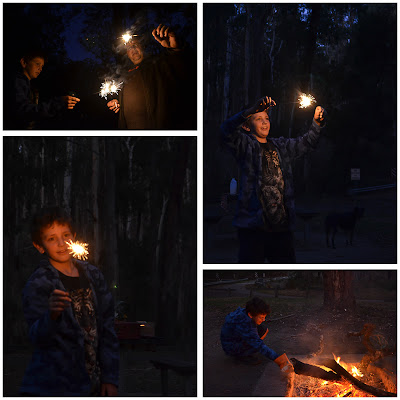 Nick works shift-work and it seems a long time since he's had a full weekend at home. He was rostered off from Thursday to Sunday and given Vaughan's pupil-free Friday, we had a celebratory dinner in the forest.

We planned to BBQ our dinner this trip, so came prepared with firelighters and matches.  Before leaving the van, I'd wrapped three large potatoes in foil.

I'd also made small parcels of carrots and beans (with knobs of butter).  I wasn't sure if they'd work but was quite pleased with the end result - and will make them again.

The potatoes were much larger than what I'd usually cook whole, so they rested in the coals for a fair while before Nick started cooking the meat and foil parcels.

Many little birds flitted about and it was very pleasant watching them and gazing up at the sky through the trees, while waiting for our dinner to cook.

As you can see, we had a feast, followed by hot beverages, more fire-gazing - and sparklers!

Soon after arrival, Vaughan had found a large grub in a curl of bark.  (There was discussion as to whether it was or wasn't a witchetty grub).  While Nick and I were sitting quietly, when Vaughan and Bandit were off exploring, a small bird pecked at the grub's bark house but decided it would rather eat something else!
Posted by Happy Hamby Campers at 23:22 No comments: 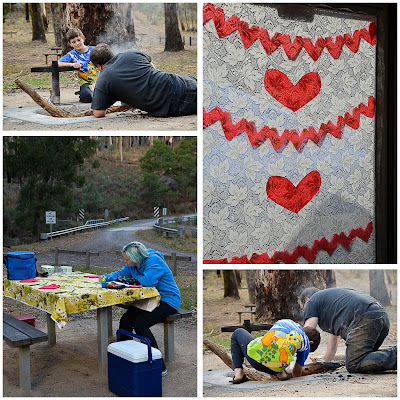 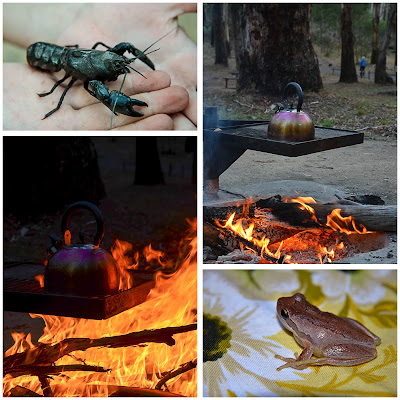 I did have plans of hanging red crepe paper heart chains around the gazebo and dining at home but as the day wore on, my motivation for crafting lessened!

I cooked dinner in one of our thermal cookers - rice and lamb rogan josh. (Lamb was on special at the local IGA and I used a bottled sauce).

It was a last-minute decision to picnic in a nearby forest area.

Although I'd packed matches and mozzie coils, it wasn't my plan to have a fire. My fire-bugs had other ideas.  They scrounged some paper from Elmer and were very happy collecting wood.

Vaughan spent some time looking for critters.  He found a large yabby and a lovely frog.  Both were released after their photo sessions.


It was a love-ly evening.  We enjoyed our dinner and rather flash dessert choices. There was extended sitting around the fire, before extinguishing it and making our way home again via more forest roads, spotting for wildlife en route.
Posted by Happy Hamby Campers at 22:33 No comments: