Perch for a picnic!

A modern (but flimsy) aluminium version wasn't much dearer but we rather liked the eBay description for ours:

"Table and seats are still strong after years of use. Folding mechanism is good. Rust on the metal and some nicks and areas of missing veneer on the edges."

Yep, it has character! It's strength is without question as it weighs half a tonne and we can perch (more or less) comfortably without any fear of the whole contraption collapsing under us! These considerations are very important!

Given the table's age and condition, we are not too worried about it bumping over rougher tracks (on the boot side of the cargo-barrier). We have enjoyed a few civilised picnics so far, at places were there are no other facilities - and will look forward to more yet to come!
Posted by Happy Hamby Campers at 14:00 No comments: 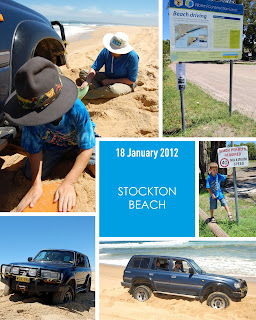 Although we had talked about a beach-driving adventure on a few occasions, it was a long time before we got around to going. When we did go, the adventure became much bigger than anyone had bargained/budgeted for!

We collected Erin from work en route to Stockton Beach (about 60km North of home). We stopped along the way to purchase a $30 annual beach driving permit - because it seemed better value than a 3-day pass for $10.

Once we got onto the beach it felt quite odd to be driving on so much open-ness. We were all giggling at the fact that the sand squeaked under Elmer's tyres. We were barely 20 mins into the adventure and just starting to relax a little when Elmer became quite substantially bogged, fairly close to the water. Erin, Vaughan and I worked with our plastic picnic plates to scrape away some of the sand while Nick walked back to a young guy, who interrupted his fishing to help - and promptly got stuck too.

Another car stopped to offer assistance but given the fate of the first assistant's vehicle, we were wary of causing anyone else to become bogged. The best option seemed to be to call the recovery vehicle number listed on the info sheet that came with the beach driving permit. Cost of recovery vehicle? $330.00 up front before they leave the depot! Good thing we economised on purchasing the permit, eh?! 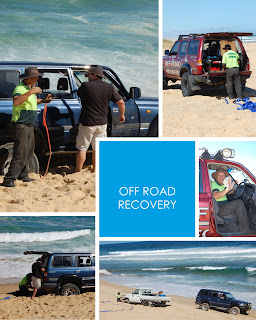 The recovery guy said he would be 50 minutes but took a little longer than that.

We were feeling edgy as we waited because the water was getting higher.  As usual we were well provisioned so I made some sandwiches but couldn't eat mine.

All felt quite relieved when "Ken" turned up. He pulled Nick a fair way back but seemed in danger of hitting the other stuck car, so un-hooked Nick and "snatched" the white ute first - then "snatched" Nick/Elmer the rest of the way.  There was considerable relieved banter once Elmer was out again. We chatted a bit with Ken, the recovery driver. In a perverse way it was reassuring to hear that he (driving the same model Landcruiser as Elmer) gets bogged also. He had a 40m snatch strap though, which is twice the length of what we and others carry - specially to keep himself further away from the trouble area when hauling others out.

Although Ken encouraged us to stay on the beach and have the fun we had planned for, we decided we'd had quite enough adventure for one day and headed back off the sand. Vaughan was quite vocal in his disappointment that we hadn't gone cardboard sledding down the dunes but I expect we will go back another day (when our nerves and budget have recovered somewhat)!
Posted by Happy Hamby Campers at 15:00 No comments: