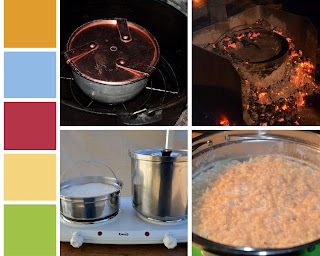 We use a variety of cooking methods when camping.

We've certainly come a long way since our early trips!   Our Maxi BBQ was often admired - and cooking over the open fire with it is quite civilised.

When an open fire isn't an option we use our wonderful dual-fuel stove, which can be used in various ways.  You can see Nick using it as a BBQ here. We've taken it on day-trips too.  We actually liked it so much that we bought a small, single burner version for boiling our kettle when on picnics. Yes, we mostly use a kettle rather than a billy when out and about (and most times the stove is set up away from our seats).  I've even made a kettle bag - and you can see we use an old billy for transporting the stove.  Since those original purchases, we've bought an additional/larger three-burner stove and a couple of single burners, via FB marketplace and/or Gumtree.  Every so often we camp with power, so our $1.00 portable hotplates get some use - though the dual fuel stove is generally packed as a matter of course.

We bought a Cobb Cooker while living in Victoria and tried it for the first time soon afterwards.  Based on that introduction we couldn't resist buying a second Cobb for $5.00 the next day!  I'm looking forward to more thorough testing of both cookers and their various attachments.  Stay tuned!

I purchased my first thermal cooker in April 2009.   It's had a lot of use since, so I purchased a second one a couple of years later in another Aldi sale.  I saw thermal cooking as a great boon for camping but I actually use both at home often (in preference to a slow cooker).

Given all my thermal cooking experiments, I decided I should become more confident using my camp oven (which had spent many years in a cupboard)!  These days I have two camp ovens - one large and one (too) small.  They are both being used regularly, with good results.

These are links to my various camp cooking experiments - and picnic provisioning!