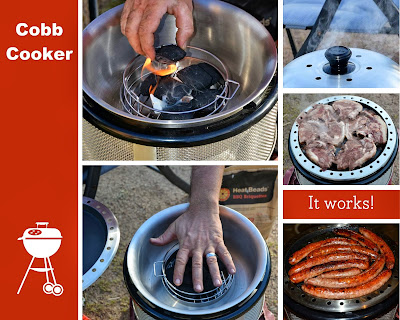 I've been interested in Cobb Cookers for quite a while and over the past few weeks have had several second-hand offerings on our eBay watchlist.

Sadly I missed the end of one auction - and the cooker sold for less than I was going to bid.  As a result of my disappointment, Nick researched prices and found a great deal at BCF.  During the week, we visited our local store, specifically to look at these cookers.  We happened to be there on the last day of a short 3-day camping equipment sale - so received 25% off the cost of our Cobb Cooker and various accessories.  What a fantastic bargain!

Funny story - we returned home and didn't check our boxes of goodies till just before Nick was leaving for work, at a little before 5:00pm.  It was then that we realised we hadn't bought a Cobb Cooker but an empty Cobb Cooker box!  I immediately rang the store and we exchanged the empty box for a full one the next day, amid much light-hearted banter from the staff!

We decided to test the Cobb Cooker tonight, just using the basic frying plate to cook eight lamb chops.  I was side-tracked by other missions and remembered to turn them after about 45 minutes.  I was very relieved to see steam rising through the lid!  The chops were on the hotplate for a bit over an hour in total but could have come off earlier.  There was still plenty of heat left in the eight heat beads, so we put on some sausages as a second experiment - and were very pleased with those results also!  Hooray!
Posted by Happy Hamby Campers at 22:13