It's nearly 12 years since we started camping! We've enjoyed many splendid adventures in that time - and racked up some great experience too. Although we don't consider ourselves experts, our ideas regarding equipment have evolved and I thought a round-up of our gear might be interesting/useful.

I should note we research the best-possible price, often buy via eBay (and more recently Gumtree/FaceBook marketplace), are quite happy with our many Aldi purchases - and wait for sales if buying retail.  If we can't get what we want, we have been known to improvise.

We bought an old Millard van when in Victoria.  You can read about it on a separate page, here.  Not long after arriving in Queensland, we bought a hard-floor camper trailer - and sold the van.  There are no plans to sell-off our tents though and our smaller one has been in use for some of our recent backyard camping.  Chairs, tables and lots of other equipment are used regardless of our sleeping quarters!

In 2013 we upgraded our tents to an Oztrail Tourer 9 and Oztrail Tourer 10-plus.  You can see them set up for the first time in the pic above.  We particularly wanted touring style tents and found both via eBay.   Several manufacturers make a size similar to our smaller tent and we would have been happy with any of those (at the right price).  Only Oztrail make the 10-plus and though we hadn't set out to buy a matched pair, they do look good together! 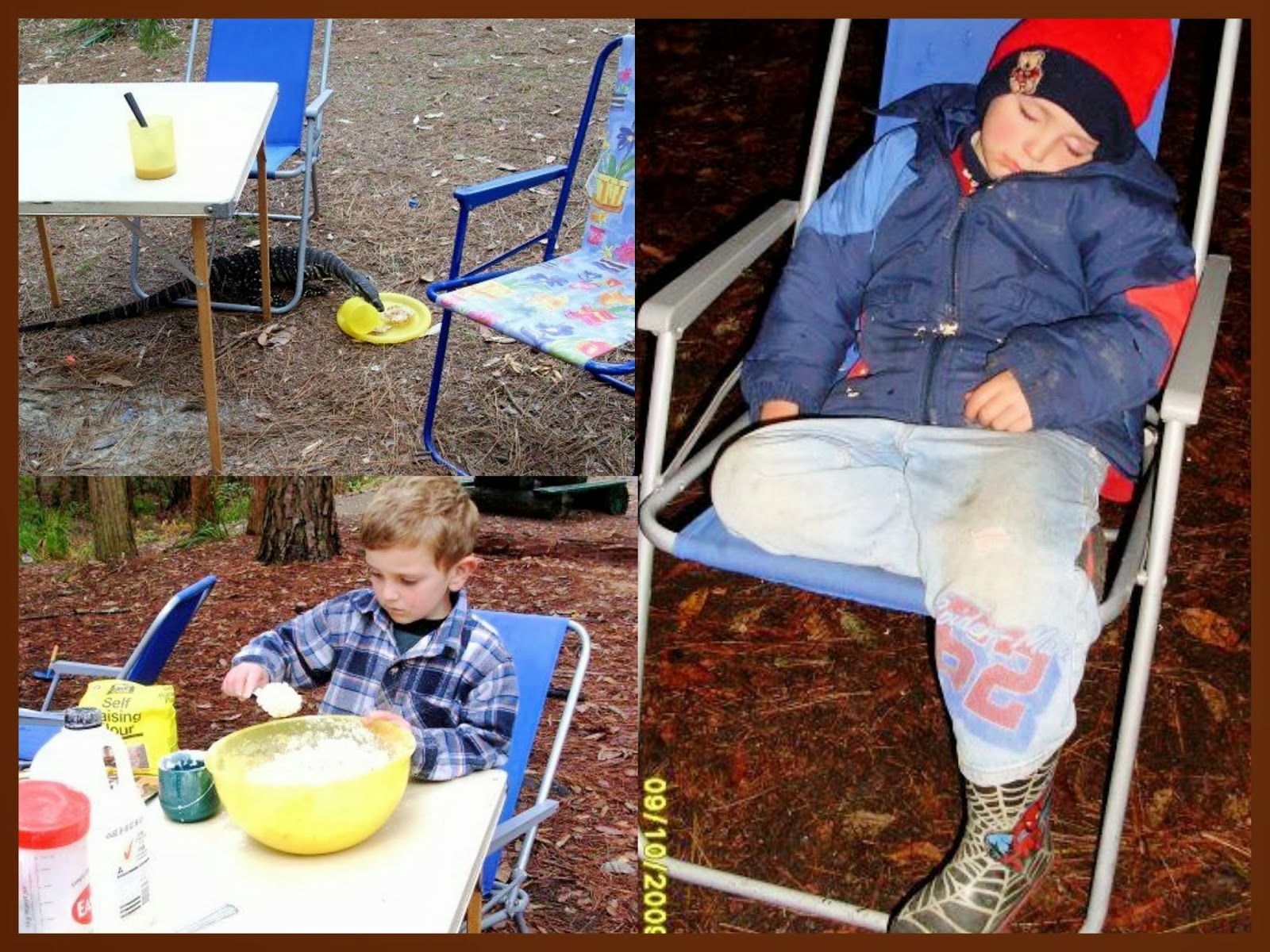 On our earliest trips we made-do. We used a (back-breaking) card table for meal preparation and sat on basic chairs that I'd bought for $5.00 each, quite a few years previously.

We also had a couple of other chairs salvaged from the side of the road. Although the photo shows Vaughan sleeping on one, no-one else found them particularly comfortable! It was so wonderful to have proper chairs, adjustable tables and a gazebo for our second year of camping!  Such luxury!

﻿﻿
Good chairs aren't cheap, so we were very disappointed when we lost one of those blue beauties en route to Lithgow, a few months after purchase.

It was replaced with a different style chair (on the left of the pic at the top of this page) which although more compact is not nearly so comfortable, nor supportive.  The three remaining blue chairs are still in use at home.  They are showing signs of wear and have been retired from camping.

We took advantage of sale prices to buy four grey replacements (also shown in the top pic) that are slightly smaller, lighter and fold flatter.  All important considerations when packing!  They used to fit with the tables in the box at the front of our trailer, so all are accessible on-the-road, if necessary - and can be used right to the last moments during pack-up.  Bliss!

(These days the chairs and a small table fit into a similar wooden box mounted on the front of the camper trailer.  Extra three-height tables travel inside the metal storage box).

Our tables are brilliant.  One of their best features is that they adjust to three different heights - so can be used as a coffee table, dining table or bench.  Equally nifty is the fact that each end can be set to a different height, which is great on uneven ground and/or sloping sites.

In the days when we had our original camping trailer, we also used a large table that Nick made.  It was used on the roof of the trailer while traveling and then as a bench at camp.  We didn't take it to Wagga, so had less surface space than usual but we certainly didn't miss hoisting it up and down from the trailer!  A light ladder also traveled on the trailer also to assist with packing.  It doubled as a very useful skinny bench, which you can see in the Warrumbungles photo above. 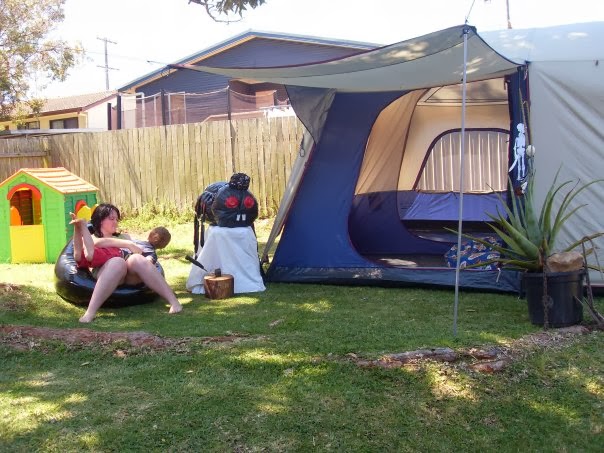 We had bought the basics only in January 2009 - so there was no shelter other than tree-shade and the small tent awnings (or the tents themselves).

Can you picture us huddled together under there?!  We gifted ourselves various camping equipment that Christmas, including our first gazebo.  What an improvement! Over time we went on to buy a second gazebo and then a third, when one of the others was broken due to heavy rain (and our inexperience).  The broken one has been kept for spare parts as you can only buy replacement awnings, not posts or other fastenings.  At some stage we also bought a couple of gazebo walls.  They are not always used but are handy on occasion.  (We also used one at home recently as an improvised movie screen)!

For quite a while prior to our touring tent upgrades, one gazebo was used over Erin's leaky tent.  We used both gazebos on our Wagga trip and their shade was very welcome in the 40+ temperatures!  (We also parked Elmer in such a way that his awning could be used as extra shade for the smaller tent against the morning sun). 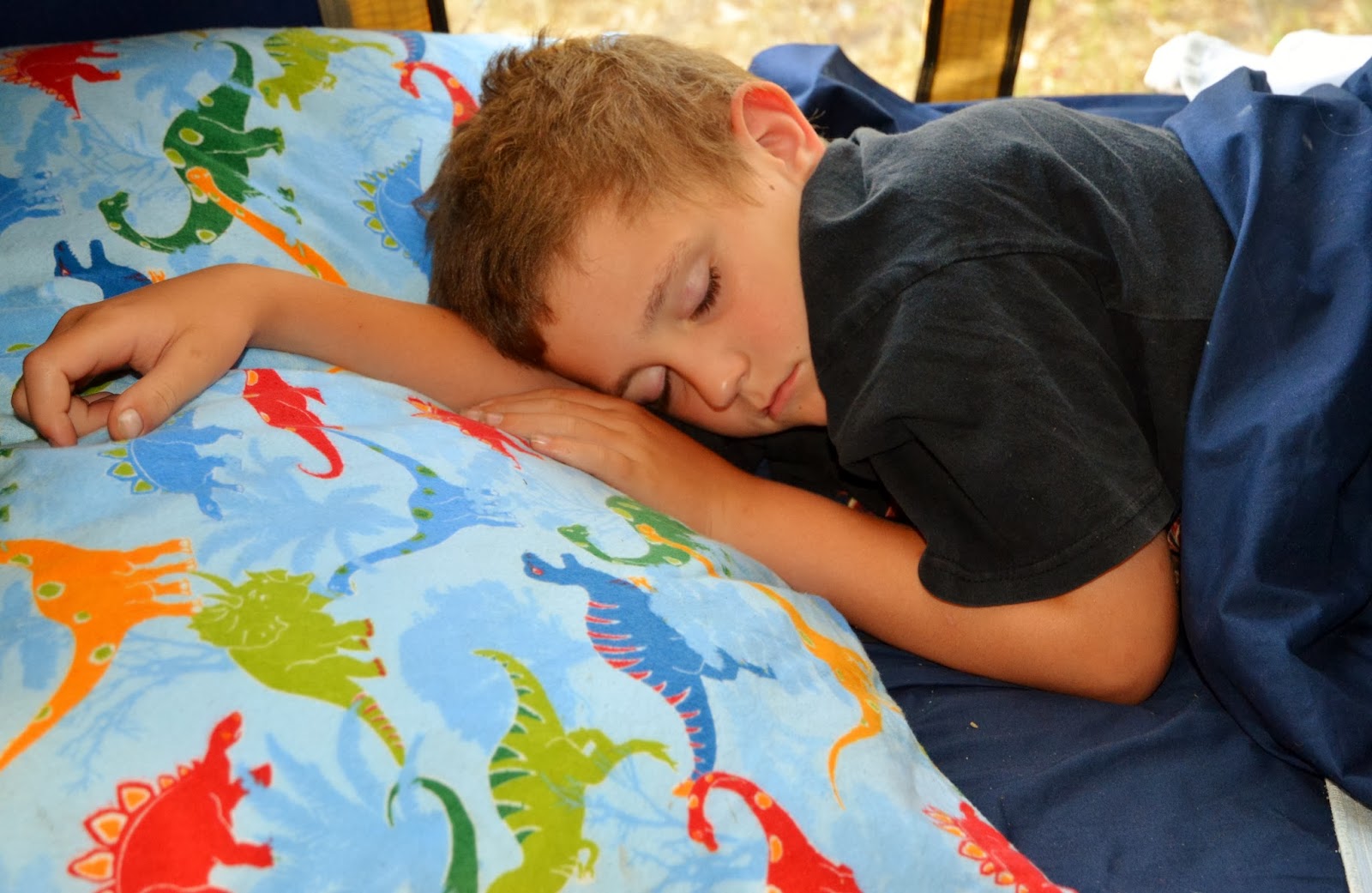 Sleep is important!  As well as updating our tents, we also updated our beds.

Erin had always used a stretcher but was very impressed with the addition of a 4WD mat for extra comfort.  We liked the new format too.  The stretchers and mats are probably a bit bulkier in transit but seem quicker to set up.  In the early days Vaughan and Nissa had a set of stretcher bunks that were very painful to organise.  We replaced them with airbeds.  Nissa used an airbed for our Wagga trip but all three airbeds were sold-off in the Great Cull of 2015, so she was on a stretcher for our more recent Nambucca camping.  Of course, our upgrade to camper trailer and Erin's to a swag meant there were four stretchers available.  We don't plan to cull them or the 4WD mats at this stage.

Camping mats are something we purchased over time. As noted in the link, if we had been smarter we would have bought them all from the same retailer! Some packs come with edging and other styles have edges available for separate purchase.  We have a large bundle of edges that we don't use.  Our other advice?  Don't pay extra for edges!

When we had just a few mats, we used them in front of the tents as doormats to stop some of the dirt and muck being tracked inside.  As our collection grew, we could create very comfortable floored areas beneath our gazebos.  Although we generally use the mats outside they are proved great insulation inside for cold-weather camping.  (When Vaughan was much younger he used to take off with some during set-up, to make a box for himself)!

We used similar mats to revamp the floor of the old caravan and believe they helped insulation when we lived in it full-time for around 18 months - before *finally* relocating to Queensland!