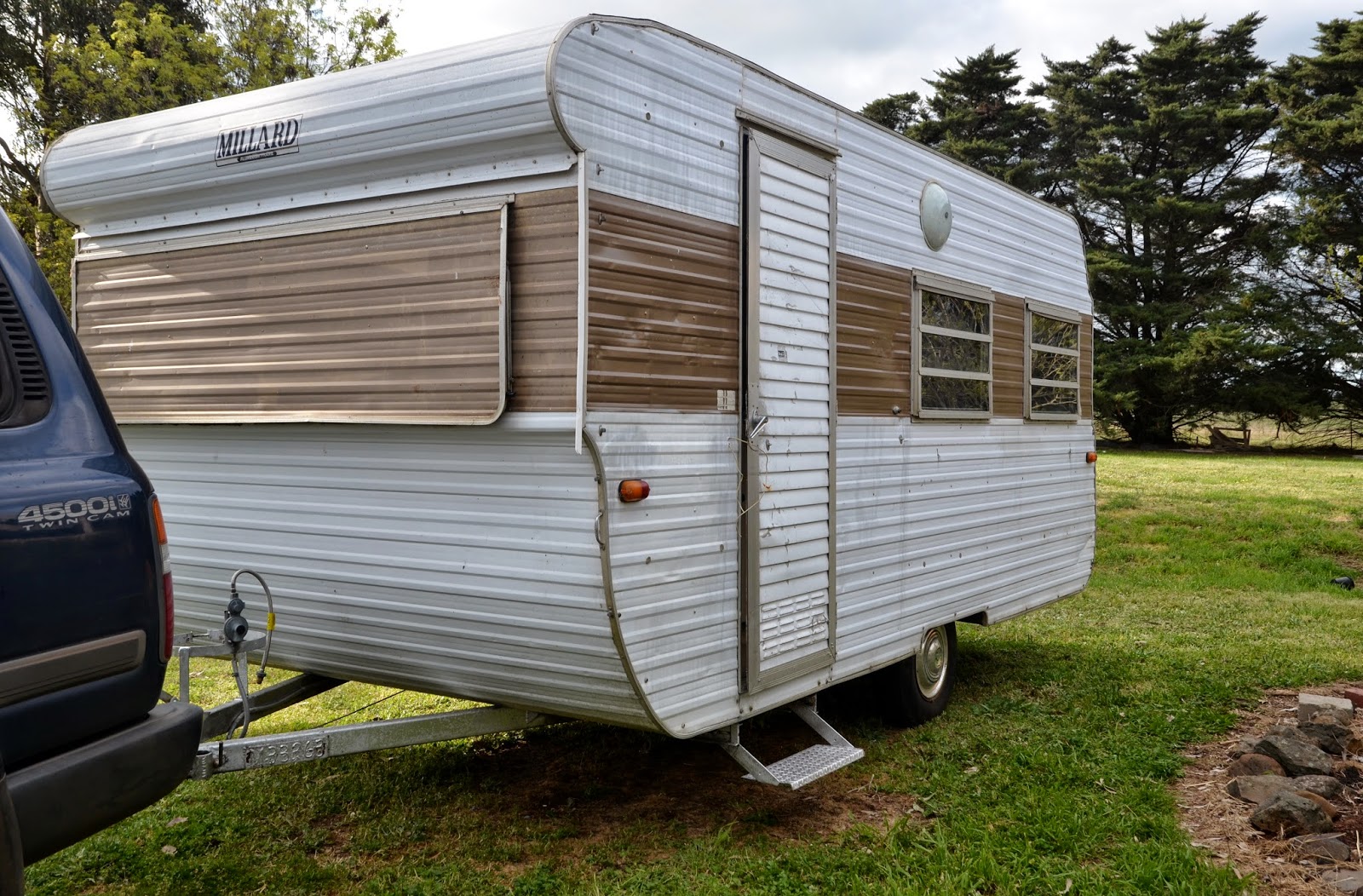 In early 2014 we enjoyed ten fantastic weeks based at Yowah in south-west Queensland. We returned home at the beginning of May, fresh from those exploits and acutely aware of the much fresher Victorian temperatures! It was even colder during winter and we weren't inclined to sleep under canvas. Yep, call us wimps!

By September I was restless and starting to think of solutions for year-round adventuring.  I voiced my desire for a caravan but didn't really have much hope of purchasing one given we had no budget for such an endeavour.  We started researching though and about a month later, in early October (thanks to Nick's unexpected work bonus), became the excited owners of a 1974 16-foot Millard!

(The van had been advertised as a 1976 model but I later found paperwork that indicated it had been manufactured a couple of years earlier).

A few nights later we tested our new acquisition by camping out at home.  That experience highlighted the need for some minor modifications and we set about readying the van for real adventures (beyond the back-yard)!  Of course, one of the most important missions was to prepare it for registration.

Some repairs were effected and we scored a better door for just $15.00 at our local dump shop!  Even more amazing than the absolute bargain price was the fact that it fit (with only slight adjustment)!

Interior modifications included "new" mattresses for the front bunks, a flyscreen for the roof hatch, replacement window winders, new/up-cycled curtains, improved flooring and a room divider/privacy screen.  As we don't use gas while camping, the gas bottle holder on the drawbar was removed and the small stove taken out - leaving a very nice storage area for our kettles, billies and teapot!

The water tank was cleaned and alarmingly green water hose replaced!  The filler inlet and intake hose were replaced.

Our next mission was to waterproof the roof!  Nick did most of the real work.  He started the project and painted the first roof edge.

A cold (and wet) camping weekend prompted me to modify Vaughan's bunk bedding.  I made inseparable sheets and revamped an old quilt with fabric from the infamous stash.  Nick and I worked together to weigh-down (hah!) Vaughan's blankets and keep him covered during the night.  The system was effective, though changing bedding involves a bit of a work-out!

We used the van as temporary accommodation from October 2015 to February 2017.  New tyres were fitted in November 2015. More modifications were made during that time. The double ensemble bed was initially replaced with our camp stretchers and then a raised double bed to accommodate lots of storage beneath.  The roof still leaked, so we used a cheap tarp "doona" when rain threatened - until Nick and Vaughan effected further silicone treatment to the roof edge.

Cold-proofing was necessary given we were based in Victoria.  Bubble-wrap was used on the bare aluminum of our door and I made a quilted roll-up cover for that window.  Some rear-end repair was needed also, which was the catalyst for some more DIY insulation.

In February 2017 we (finally) relocated from Victoria to Queensland (about 700km North of our original New South Wales location and 1,700km from where we lived in Victoria).  We bought a camper trailer in mid-July - and a week later sold our caravan.  It served us very well but we're now enjoying a new style of adventuring.