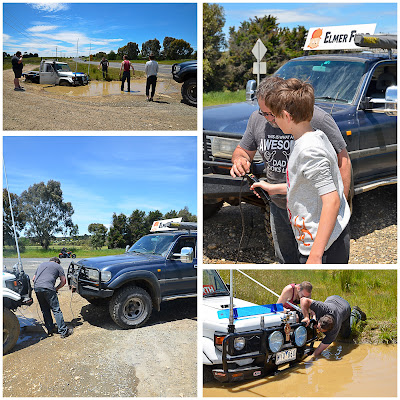 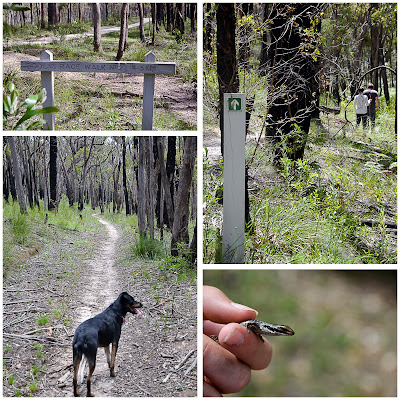 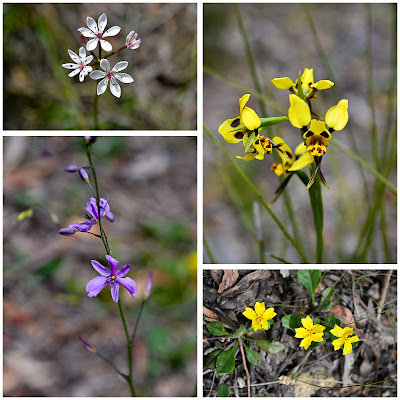 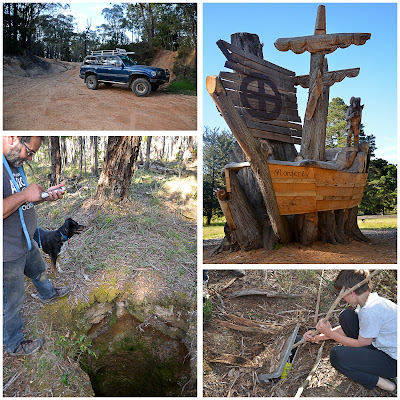 I'd spotted signs for Boden's Water Race on several occasions, when returning from other adventures. As we had an afternoon free, we headed out to investigate.

On the way to the site, we rescued a couple of young guys who had mis-judged the depth of a "puddle".  They were very happy to be assisted (and even gave us some ice-cream money)!

Rescues aside, my plan was to have a quick look at the water race, find a geocache and then praps have lunch.  I definitely wasn't dressed for a 4.5 kilometre walk in strong sunshine but Nick set off and the rest of us followed!

As I trudged along in my fitflops (yep, my poor feet were blistered by the end of the walk), I had lots of opportunity to admire Thomas Boden's handiwork.

He and his cronies hand-dug the races in the 1860s, to direct water to various mining sites - all during summer months.  As much as I wasn't greatly comfortable, I was very glad not to be digging trenches!

There were beautiful wildflowers along the path, plenty of birds and little lizards.  When nearly back to the car (and thinking about snakes) I surprised two blue-tongue lizards engaged in a serious wrestle by the path.

At first I thought they were a snake, so was relieved to identify them otherwise!

One lizard had his mouth clamped around the other's front leg - and there was blood from that and another injury.

Nick aided the loser out of range and we continued on our way, hoping the battle was over.  Soon after the lizard encounter we met Vaughan walking back to us, bearing a large bottle of icy cold water and a cup.  What an absolutely marvelous lad!

We finally had lunch at Smythesdale Gardens Reserve (where we stopped for morning tea with Erin a couple of days prior).  Vaughan played on the neat pirate ship and afterwards we checked out a nearby quarry area for another geocache - before making our way home.
Posted by Happy Hamby Campers at 20:34

Email ThisBlogThis!Share to TwitterShare to FacebookShare to Pinterest
Labels: Geocaches